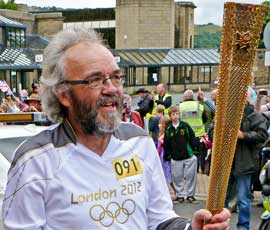 A Yorkshire farmer who took up running after suffering a heart attack has had the honour of carrying the Olympic torch.

Frank Chislett, who farms near Halifax in Yorkshire, carried the flame through his hometown on the 37th day (24 June) of its journey, on the leg from Manchester to Leeds.

In his nomination story to the Olympic organisers, he said he saw himself as a health ambassador for the farming industry.

Mr Chislett said he wanted to “improve the health and fitness of farmers everywhere” and that he took up running after suffering a heart attack four years ago.

He ran his first London marathon this year, finishing in a time of just four hours, three minutes.

Another person with a farming connection involved in the relay was Jan Booth, 23, who is the chairman of Cumbria Young Farmers Club and sits on various farming committees.

She carried the flame through Bowness-on-Windermere on 21 June.

Picture from Flickr reproduced under licence with permission of Tim Green aka atoach.

Farmers Weekly’s Johann Tasker speaks to Mr Chislett in the video below.