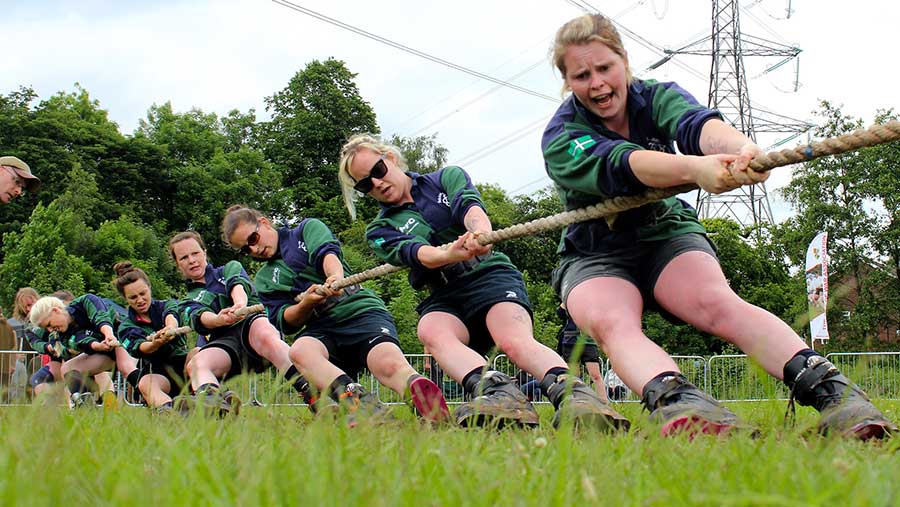 Tug of war has been popular among Young Farmers for generations. We ask one enthusiast, Devon-based Georgina Davie, to explain the appeal of the sport.

Georgie, fresh from recent successes with her team, also advises on how newcomers to the sport can try it.

How did you first get involved with tug of war?

After graduating from Harper Adams University in 2012, I returned home where I could continue with Newton St Cyres Young Farmers’ Club.

Our local clubs had all grouped together to form a tug of war team a year before so I decided to give it a go. To begin with, we entered the Friday night league and local shows, but this has led to competitions run by the England Tug of War Association in the last couple of years.

Tell us a bit about the team you’re in

The team is mainly members from the Haldon Group of Young Farmers (based in Devon) but, as we compete in non-YFC competitions as well, we also have members outside of membership age.

The ladies team is aged 17-28 and comes from different backgrounds – including a mechanic, charity workers and a student, as well as farmers.

Since I started, the team’s aim was to win the National Federation of YFC’s tug of war finals, and the thought never crossed my mind that we would one day represent England.

Getting to where we are has taken a lot of commitment, hard-work and training from the whole team. We wouldn’t have managed it without the dedication from Michael Smerdon.

He helped form the team and has coached both the men’s and ladies team, Mark Hutchins who has been coaching us this year and our captain, Emma Davie.

You’ve recently had success within NFYFC and in other competitions?

Recently we have had a good run of competitions – we won the National Federation of YFC’s finals at Tenbury Countryside Show on 5 August.

It was challenging as our anchor was on a Devon YFC exchange in Finland, so we changed the team around to accommodate this on the rope.

Our team has made steady progress to reach this winning spot after coming fifth in 2014, third in 2015 and second in 2016. The harder you train, the harder you are to beat.

We also attended the British & Irish Outdoor Tug of War Championships in Paisley, Scotland, in August where our team represented as England B in the Ladies 560kg competition.

We were over the moon to have picked up gold after beating England A in the finals.

The following day we entered the open competition at the B&I Championships where we competed as Haldon Ladies, and won the Ladies 560kg competition, beating York in the Finals.

That afternoon, we also entered a mixed 4×4 560kg team with our Haldon men, and got a silver medal, missing out on the gold which was won by Kilroe.

Our recent success means so much for the team, having trained hard in the lead-up to the competitions and having got down to weight – which is another challenge in itself!

What traits do you need to be good at it?

It’s important to be hard-working and committed. If you miss a training session you can feel the difference in both fitness and strength.

We challenge ourselves at each training to lift heavier weights and to work as a team to improve our technique and style.

How do you train?

We train twice a week on a wooden training rack with a weight pulley system which was built by members of the men’s team, and a grass yo-yo where two teams practise pulling against each other.

We compete in a Friday night league hosted by different Young Farmers Clubs across Devon, and then travel across the country to take part in other competitions over the weekend.

In addition, we train throughout the week with additional fitness including running and cross-fit.

Do many women take part?

The number of female teams has slowly increased since I started four years ago, but there are definitely more men’s teams. It’s great when new female teams start. 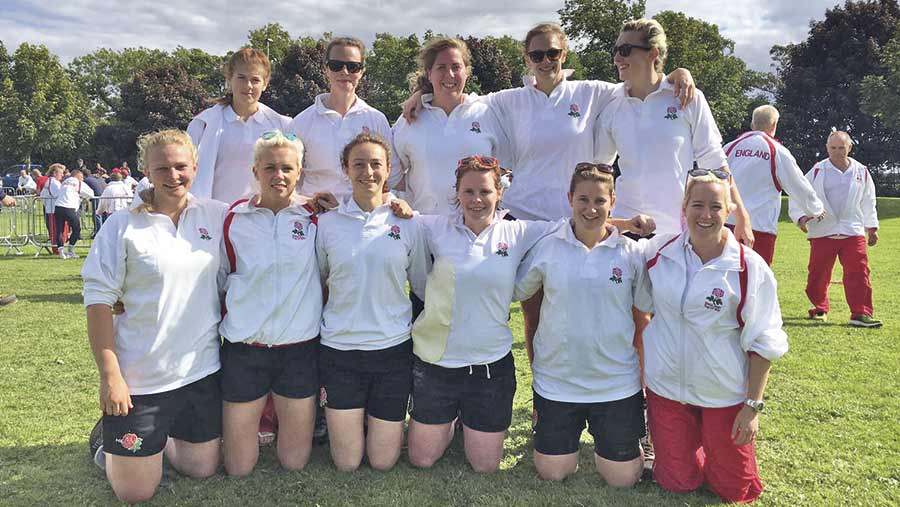 How would a young person interested in it get involved?

Speak to your local Young Farmers Club who may have their own team, or could put you in touch with the closest club.

If you get enough people interested, you could always start your own team.

Otherwise, contact the England Tug of War Association who can put you in touch with a club in your area.

What do you do when you’re not doing TOW?

The outdoor tug of war season runs from February to September, so a lot of time is committed to the sport.

Between training and competitions this year, I am busy with my role as chairman for Newton St Cyres YFC who are celebrating their 80th anniversary, and travel chairman for the Devon Federation of YFCs.

This year I did an 80-mile Coast2Coast bike ride from Barnstaple to Exmouth raising £910 for Farms for City Children, and I am starting to train for the Great West Run half marathon which is taking place in October.

What’s next for you guys?

We’re now training to compete at Widecombe Fair on 12 September, and the 2017 European Outdoor Championships on 21-24 September in Southport. And if any individuals or businesses would like to sponsor us for the 2017/2018 season, please contact georginadavie@hotmail.co.uk.

Haldon team is on Facebook at www.facebook.com/HaldonTOW and there’s more information available at tugofwar.co.uk