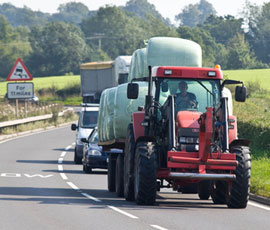 Young Farmers’ Clubs are holding talks with the government as part of a campaign to reduce the number of deaths on rural roads.

Most accidents involve young male drivers, who are 37% more likely to be injured in a road accident if they drive in the countryside.

The campaign, which will officially launch in November, aims to encourage young people to drive more safely on rural roads.

“Everyone knows someone that’s either a friend or a family member that has lost their life,” she said.

He said: “We welcome the support of any group looking to improve road safety, especially those involving young people.

“Everyone knows someone that’s either a friend or a family member that has lost their life.”
Millie Wastie

“Any road death or injury is a tragedy and I will continue to take urgent action to crack down on the most dangerous drivers while improving training to make our roads safer for everyone.”

The meeting was arranged to discuss the government’s policies on rural roads and the plans NFYFC, which represents thousand of people under 26 in England and Wales, have to improve safety, including working with road safety campaigners such as Brake.

Ms Wastie said she was delighted with the outcome of the meeting.

“It is fantastic that we have the support of someone as influential as Mr Penning,” she said.

“We really hope that his backing will help us gain some momentum and encourage more young people to look at how they can stay safe on the roads.”