It has been a rocky year for the the Young Farmers movement, with the bitter fallout from the axing of the National Federation of Young Farmers’ Clubs (NFYFC) annual convention casting a shadow over the impressive and inspiring work of its members.

We speak to four young farmers about their incredible experiences, which serve as a timely reminder that YFC is about so much more than a long weekend in a seaside town once a year. 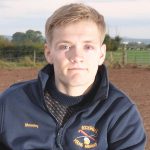 I’ve always enjoyed being active. Whether that is being out on the quad bikes on our dairy farm or being part of our YFC’s jump rope competition team, I’m not one for staying still.

So when I suffered a life-threatening spinal injury that put me in hospital for six months and which has left me unable to walk, it was absolutely devastating.

What is getting me through it is the support and friendship of everyone in YFC. When I was in the spinal care unit in hospital, I had people come to see me nearly every day from clubs all across the county, as well as Shropshire and Cheshire.

I know it was hard for them to see me like this. But every single person came – no one was afraid to come and see me. I think we have helped each other through.

Typically, I was doing something sporty when the accident happened. It was a few weeks before our club was due to compete in the regional finals of the NFYFC jump rope competition. I’d gone to a trampoline park with my friends – I landed badly and broke my neck.

The first thing that ran through my mind after the accident was: “What are the jump rope team going to think?”

They were absolutely fantastic, of course. They always kept me involved, throughout the rehabilitation process.

They all came to see me in the hospital and said I was a bit of a coach. I kept messaging them and spurring them on. I was trying my best to stay as involved as I could.

But it’s not just the moral support. Young Farmers are practical people – if they see a problem, they want to find a solution.

So my friends took it upon themselves to raise funds so that I can get some specialist equipment to help me in this next stage of my life – they called it “Get Moseley Back On The Move”.

They’ve done all sorts of things like long-distance bike rides and have raised an incredible £20,000. It’s going to make a huge difference for me.

I feel very lucky to be a part of YFC. If I wasn’t, I don’t know what sort of state I’d be in now. And I’m going to stay involved. In fact, I’m quite motivated to be our chairman one day. I’m already a man in a chair, so I’m halfway there. 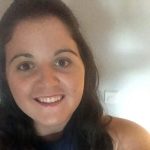 It was exciting when the team from the BBC’s Countryfile came to visit to speak to us about the clean-up work we did after the floods hit Carlisle in 2015.

And I can’t deny that seeing the final piece on TV was amazing too. We’d been shortlisted for the Countryfile Awards because of all the work we had done in clearing away all the debris that had been washed up and then left behind as the floodwaters dissipated.

But, of course, we didn’t do it for that kind of recognition – we had no idea it would generate any publicity. We did it because we knew we could help.

My brother Tom and the club leader at the time, Stephen Buckle, organised filling some more sandbags to prevent more houses getting flooded.

A couple of weeks later, they got in touch with the council to offer their services to use some tractors and trailers to clear the streets of all the rubbish that had been washed up.

We sent the call out to some other local YFCs to get involved – we’ve got four or five in a 10-mile radius – and we got it all done in one day.

It was just cleaning up and tidying up, but the streets looked so much better and the people were so thankful.

Sometimes you feel like you can’t make a difference by yourself – or even as a single club. But when you see how much of a difference you can make, that really gives you confidence and, as a club, we’ve become involved in a lot more community projects, including raising funds to buy a defibrillator for the village.

I can’t say if being in YFC has been a factor in my decision to train to be a paramedic. But the community spirit that being a Young Farmer gives you and a paramedic’s professional duty to help other people aren’t that far apart.

I’m in my final year of training to be a paramedic and being part of Young Farmers has been a huge support.

I was club secretary in the year of the flood, which really helped my organisational skills because I had 80-odd members to sort out.

And you need to be able to speak up. Whether you’re organising some fundraising, or pushing for a meeting, or organising a trip, you have to make yourself heard and YFC has been brilliant for me in that regard.

I’ve also learned a lot about communication. You learn how to talk to people of all ages. As well as close friends, you are also engaging with junior members who are still at school, advisory members who are a bit older and, when you’re taking part in competitions, you are speaking to judges who could be any age.

Young Farmers Clubs are really important for people in rural areas. We can be quite secluded – it’s not like you pass people in the street every day. So that regular contact you get through meeting up once a week with your YFC friends is vital. 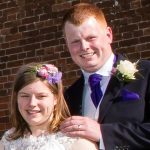 Everything that is dear to me, I got through Young Farmers. My career, my best memories, my closest friends – even my wife.

Like a lot of members, I’m not actually from a farming background. My best friend joined after college and I came along with him. It was the best decision I ever made.

The woman who was to become my wife, Mary, was club chairman when we first got together – we were organising a Sport Relief Mile for the club and I plucked up the courage to ask her out. That was seven years ago and we got married in May this year.

YFC has opened up a whole new industry to me too. My wife grew up on a farm, but I have seen that agriculture is about so much more than the end product of crops and livestock.

The nature of my job means that you have to adapt to problems. If you come across a problem that no one has had before, then you have to come up with a solution – there is no one else to ring because you’re the last one in the line.

YFC has helped given me confidence to be able to think on the spot, to come up with a solution and be accountable for it.

I gained that confidence through taking up leadership positions within my club. I became club chairman the year after my wife’s term and have been club leader two or three times, which has involved organising events and giving speeches to large groups of people.

These roles and responsibilities give you the confidence to believe in yourself and express yourself – which has been vital in my work.

And when I started my job in the agriculture sector, I was surprised by how many people I already knew. I am part of a community.

‘Running your own club’ 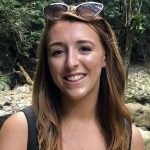 There are lots of fantastic organisations that give young people a chance to be part of something and to develop, but they’re usually run by older people. One of the great things about YFC is that we run the clubs ourselves.

And the skills that you learn in running your own club are valuable throughout your life – skills such as organisation, planning, negotiation, public speaking and leadership.

I used to hate presenting in front of the 12 people in my university classes, but after holding positions in my club, I now really enjoy it.

My first major role was as club secretary, which I did for two years. It involves taking minutes at meetings, and sometimes arranging where meetings are held.

Now I am programme secretary I organise the activities that we hold every Thursday. It means I’m always contacting new people and finding ways to encourage them to visit our club, and ensuring I meet deadlines and get everything organised in time.

What has surprised me is how much I am enjoying meeting these new people and being the spokesperson for the club. It has really boosted my confidence and improved my time-keeping.

The great thing about our club is that you can get involved as much as you like – but you don’t have to take on a role.

And there is always enough experience around to help people if they get stuck. My sister was club secretary before me and when I took over, she was there explaining what needed to be done and also giving compliments when I was doing something well.

Now, when I am passing on to someone, I use what she told me to help them. Everyone helps each other when they need it.

All this week (8-12 October) Young Farmers are celebrating everything that is great about Young Farmers’ Clubs.

It’s a week-long celebration to shout about the fantastic things that clubs right across the country do for young people in their rural communities.

This year, YFC members and the wider farming community are being asked to share what they think is great about being a part of one of the largest rural youth organisations in the UK.

Get involved on social media by using the hashtag #TrueYFC to do your bit to reinforce what it really means to be a Young Farmer, answering the question “What does YFC mean to you?”

NFYFC is launching a video competition for all clubs to take part in, with the aim of helping promote their YFC to the masses. You could win £350 for your club.

To find out more about the competition and how you can get involved, visit the NFYFC website.