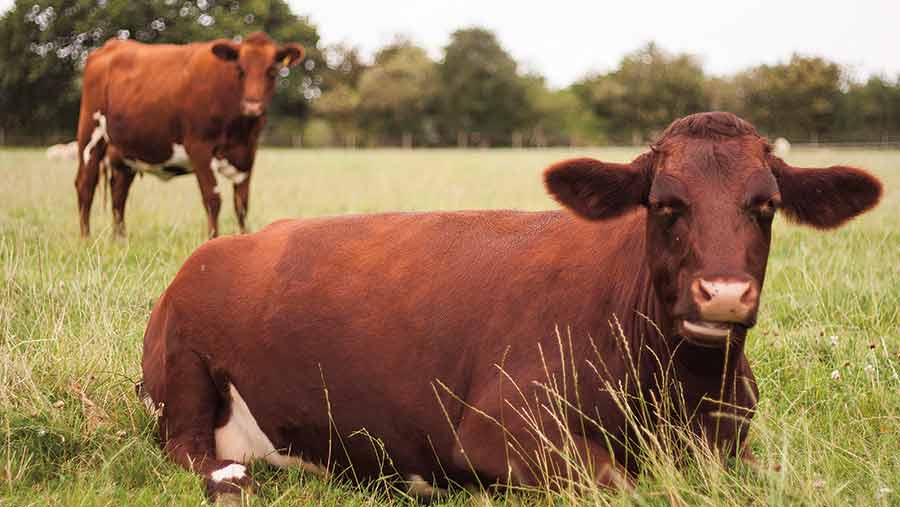 All aspects of the grass-based system employed by staff and students at Chichester College’s Brinsbury campus farm in Pulborough, West Sussex, are geared towards maximising the production of milk from forage.

Of this, 4,174 litres are produced from forage and the rest from the 750-800kg of concentrate fed to each cow annually in the parlour.

All 850,000 litres of milk produced annually by the farm’s 130 Dairy Shorthorn and Ayrshire cows is sold to Arla Foods.

Dan Stamper, who manages the herd, says to achieve such a high percentage of milk from forage, everything from calving pattern to soil management is focused on increasing the time cows spend grazing. 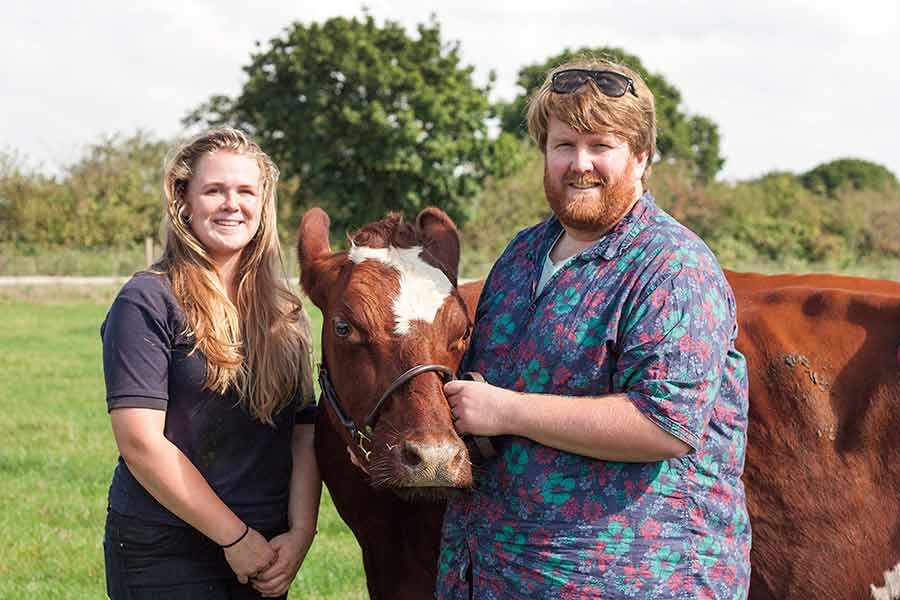 “Simplicity is essential,” says Mr Stamper. “The majority of our students have no farming background, so they need to learn a simple system they can then reflect against as they go out into the workplace.

“Once they leave and set up on their own, they’re not going to be building mega dairies,” he says.

“They’re going to be starting with a grass-based system. That is why what we teach here is important.”

The first job Mr Stamper did when he arrived at Brinsbury campus farm five years ago was to increase the time the herd spent on grass, as the then 80-cow herd of Dairy Shorthorns weren’t being turned out until late April.

“They were just getting fat and not producing a lot [of milk],” says Mr Stamper. “We quickly realised we needed to get them out on to pasture.

“So we scrapped that system and put in electric fencing.” 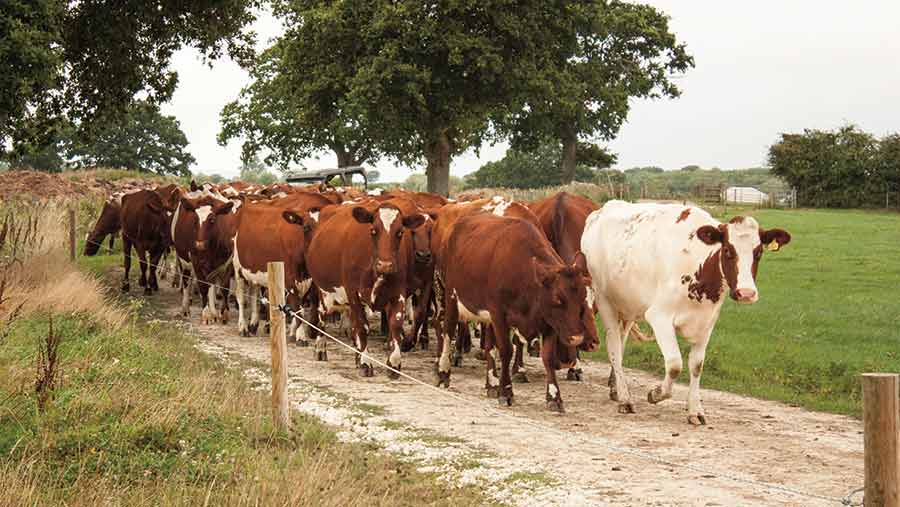 Cows are now turned out at the end of February or beginning of March and typically stay out until 1 November. Inside, they are fed clamp silage with a target quality of 11ME and a D-value in the high 60s.

Split into 30 mixed-size paddocks, the farm’s 130ha of pasture is rotationally grazed at intervals that vary depending on paddock size.

“The paddocks are not a uniform size,” says Mr Stamper, “but we don’t allow them to graze on any area for more than two days.

In total, about 100 full-time agriculture diploma students a week work on the Brinsbury campus farm.

With the exception of slurry handling and silage foraging, students “do absolutely everything” at Brinsbury, says Mr Stamper.

Modules include grassland management, which begins in September with establishment – learning to plough, cultivate and drill new leys – and ends in May.

See also: What to consider before entering a farming joint venture

By May, students are plate metering all 130ha of the farm’s predominantly Aber high-sugar grass pasture every week.

“Plate metering has helped us increase the amount of grass grown and ensure it is grazed at the right stage,” says Mr Stamper, adding that soil resilience is key to maximising the availability of grass and forage.

Much work has been done in recent years at Brinsbury to improve soil, which had been stripped out by years of wheat and barley cultivation.

“We only apply N to grazing land, with P and K coming from cow manure, slurry and farmyard manure.”

Typically, 40kg/ha of N is applied at the end of March, followed by two or three applications at 50kg/ha in April and May. A final dressing of 50kg/ha is applied in September.

Soil P and K tests are carried out on each field approximately every five years, Mr Stamper says, and lime has been applied across the farm with a target of 6.5pH.

To prevent run-off and soil erosion, buffer strips are also in place around all streams and ponds on the farm.

Even the farm’s calving policy is engineered to optimise production from grazed grass.

The herd is split into autumn- and spring-calving blocks, with about 90 calving in September and October and the rest in February and March.

“It levels off our production profile,” says Mr Stamper. “We’re milking through the spring, maximising the spring and autumn flush, while getting the most experience for our students.” 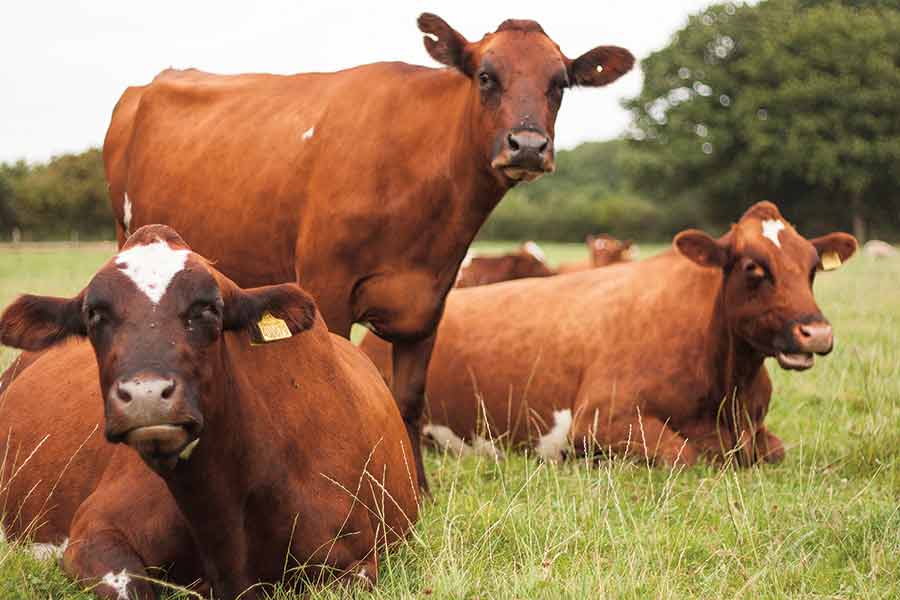 “This year we will give nine weeks for our autumn block and next spring will be 10 weeks.”

AI is used on first and second services, with a home-bred Sussex sweeper bull used to clean up.

Red Cattle Genetics bulls are used almost exclusively, but this year any cow not suitable to be bred pedigree will be crossed to Jersey bulls, which Mr Stamper says will further support the herd’s milk fat and protein percentages.

Submission rates in the first 21 days in the autumn-calving block hit 91% and the rate of conception to first service was 62%. Mr Stamper attributes the result in part to improvements in heat detection.

“Key to it has been doing heat detection using scratch cards,” he says. “Because we pay great attention to detail with heat detection, we submit more correctly, we so have a better chance of them getting into calf.”

Bull calves are sold at one week to a local rearer, with the exception of two or three kept as potential stock bulls.

Heifers are reared for the first six weeks in labour-intensive individual pens and weaned once they eat 2kg of concentrate on two consecutive days. 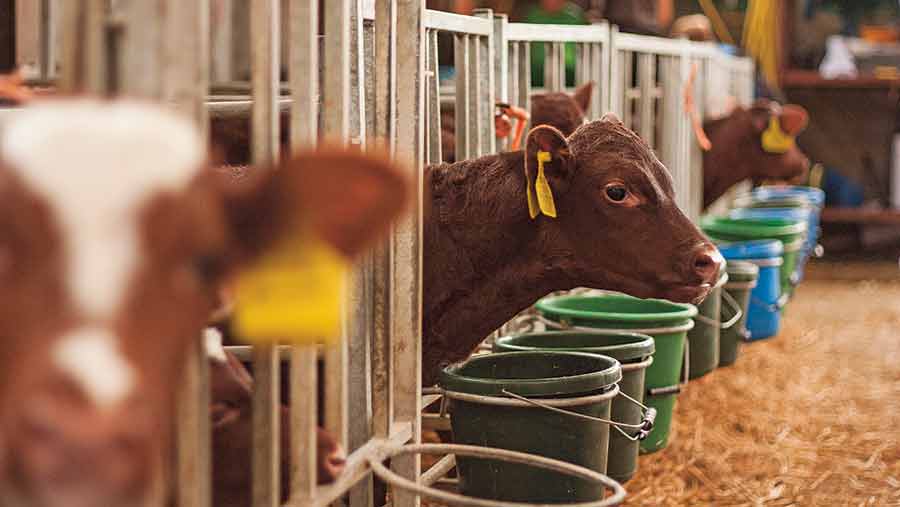 They’re then batch-reared and weighed regularly, with the aim of reaching 330kg at 14 months. This better prepares them for first calving at 24 months, says Mr Stamper.

“This allows us to mate them to naturally expressed heats, which we have found to be more fertile,” he says. “We want as little intervention as possible in any of our cows and would like to move away completely from expensive hormone therapies.”

With such volatility in the dairy sector, Mr Stamper says efficiency and resilience in all areas of your production system is essential.

“You want to ensure your system is as efficient and as resilient as it can possibly be,” he says.

“Even if in future we decide to feed more cake, we’ll still be focusing on producing milk from forage and not chasing litres.

“It is best to produce cheaply and convert grass into milk.”