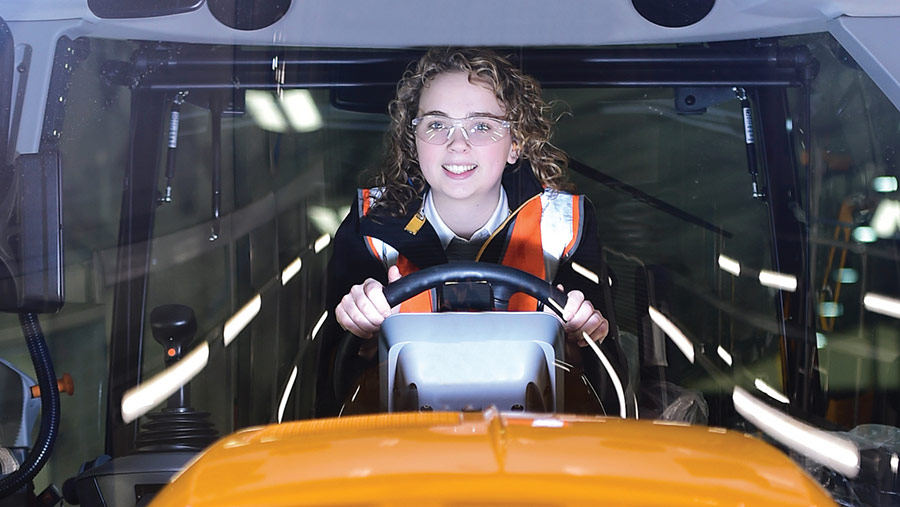 Studying Stem, or science, technology, engineering and maths, subjects is a less traditional route to a job in farming, but offers some fantastic careers.

We spoke to an engineering apprentice, Poppy Burrough, who is working for JCB, to find out more about her agricultural career path.

See also: Job profile – what it’s like to be a agricultural engineer

20-year-old Poppy Burrough is in her third and final year of an apprenticeship as an engineering technician with JCB, and is testimony – if ever it were needed – to how women are making great strides in Stem careers.

She joined the firm in September 2018, after studying a Level 3 Diploma in Agriculture at Kingston Maurward College in Dorset.

“My dad’s an agricultural engineer, so I was exposed to it from a young age and I suppose it’s always been in my blood. My interest in it really grew when I joined a Young Farmers Club at 14,” she says.

Getting on a JCB apprenticeship was a once-in-a-lifetime opportunity for Poppy, allowing her to work at the firm’s Staffordshire HQ, in tandem with undertaking a structured learning programme – covering everything from welding to supply chain and logistics.

Her big break came when she attended the Grassland UK event in 2018. “I spoke to a lot of companies, but they mostly just referred me to their websites.

When I went to the JCB stand, the employee I spoke to soon realised I wasn’t just there for a freebie, so he sent an apprentice over to chat to me.

We swapped details and the next day I had a call from someone in HR offering me an interview.

“Within a week of them ringing me I was at JCB’s world headquarters in Staffordshire and, the day after that, they rang me and offered me a job. It was all a bit of a whirlwind.”

Poppy loves the role’s mix of hands-on and management elements – combining training and work. “I always enjoyed maths, but it’s applying it to a real-world scenario that I really enjoy.”

Her aim is to ultimately become a Fastrac product specialist in tandem with completing a degree.

“The Fastrac is such a unique machine, which is why I’m passionate about developing my role around this particular product.

“When you’re planning your career, you should always listen to other people’s advice, but, ultimately, you have to go with your heart and your dreams.”

The Covid-19 pandemic has, she says, prompted more individuals and businesses to embrace cutting-edge technology as they strive for more efficient and enjoyable ways of living and working.

“I’m a big fan of technology. I’m also an advocate for apprenticeships and women in Stem careers, because my journey into engineering has really taught me about the challenges women face in the industry.

“We now have a record number of women in engineering, but there’s still a long way to go.

“As long as you have the talent and work hard, you can do any job. Gender is irrelevant to your capability to succeed. Anyone has the capability to do anything if they put their mind to it.”

There is, she acknowledges, often an awareness in her mind that she is the only woman in the room and so up against the boys.

“That means I do make myself go the extra mile, even if it’s just subconsciously, to prove myself. That can be a benefit, even though I don’t think I should have to.

“Outside of work, some people just jump to conclusions. I’m often asked if I work on the parts counter.

“Sexism is still a huge problem, but far, far less than it used to be. Women are conquering various industries now.”

Confidence and communication skills are key to successes in any career, she says. “Nobody walks into a job and knows everything from Day 1, so you should never be afraid of asking questions.”

As well as being a Stem ambassador for JCB, she’s part of the West Midlands Young Apprentice Ambassador Network (YAAN) and was formerly an NFU Student and Young Farmer Ambassador.

She was even on BBC Radio Stoke recently to coincide with the 75th anniversary of JCB.

“I sometimes get the mick taken out of me at Young Farmers – they refer to me as the media celebrity.

“I loved YFC from the moment I joined, and have taken part in just about every competition there is. One that I’ll always remember was to design a ‘dream machine’ and do a market analysis and sales pitch for it.”

Her idea for a self-propelled fertiliser spreader with a telescopic HIAB, which would remove the need for a loader and another driver – effectively combining two machines into one – ended up netting a prestigious fourth place at national level.

“Farmers are very ingenious and are constantly thinking about ways to make tasks simpler, quicker and safer – so a good starting place for a designer is always to think: Where are users trying to alter an existing item? That’s where you’ll find your gap in the market.

“Sometimes the simplest ideas are the best ones, although often when you have a great idea, you soon realise it’s already been done.”

Poppy is, she says, carrying on a family tradition. “My great-granddad was an agricultural contractor and my dad collects vintage machinery. I remember we had holidays when I was a kid to a steam fair in Dorset.

“I even got a Massey 135 for my 16th birthday. It was a complete surprise – I went out to feed the pigs and there was a tractor covered in ribbons. It was in running condition, but needed some work.

“It’ll be a nice project for dad and me to work on after Covid – if we can ever find the time!”