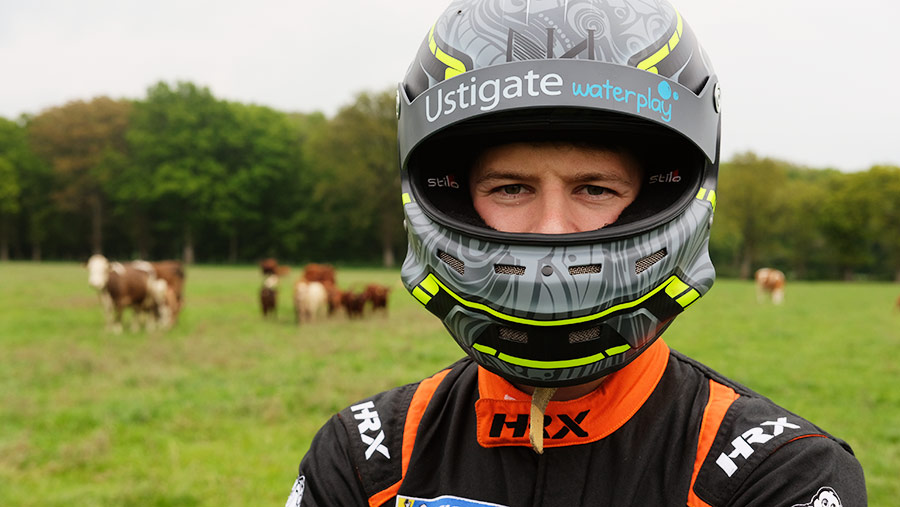 Like many kids growing up on a farm, Nathan Heathcote’s first driving experience came well before the days of slapping L-plates on his first car.

His earliest memory of driving is around the age of seven, sitting on his dad’s lap, cautiously steering the Land Rover as they checked cattle out in the fields.

Some years later, Nathan had graduated to the joy of tearing about in a field car, practising his control in an old Ford Fiesta.

The first tractor he ever got behind the wheel of was an iconic Massey Fergusson 165, when his dad put him on topping or rolling duties.

Through his teenage years, and to this day, Nathan has been involved in the contracting side of the the family business, FGS Agri – one of the South East’s largest contractors, based near Ashford in Kent.

It’s the experiences his farming background has given him that makes him the highly talented racing driver he is today – an adrenaline-fuelled journey that has taken him to race tracks around the world.

He’s as happy blasting around a track in a 400hp race car as he is bailing straw with a similarly powered Claas 950. 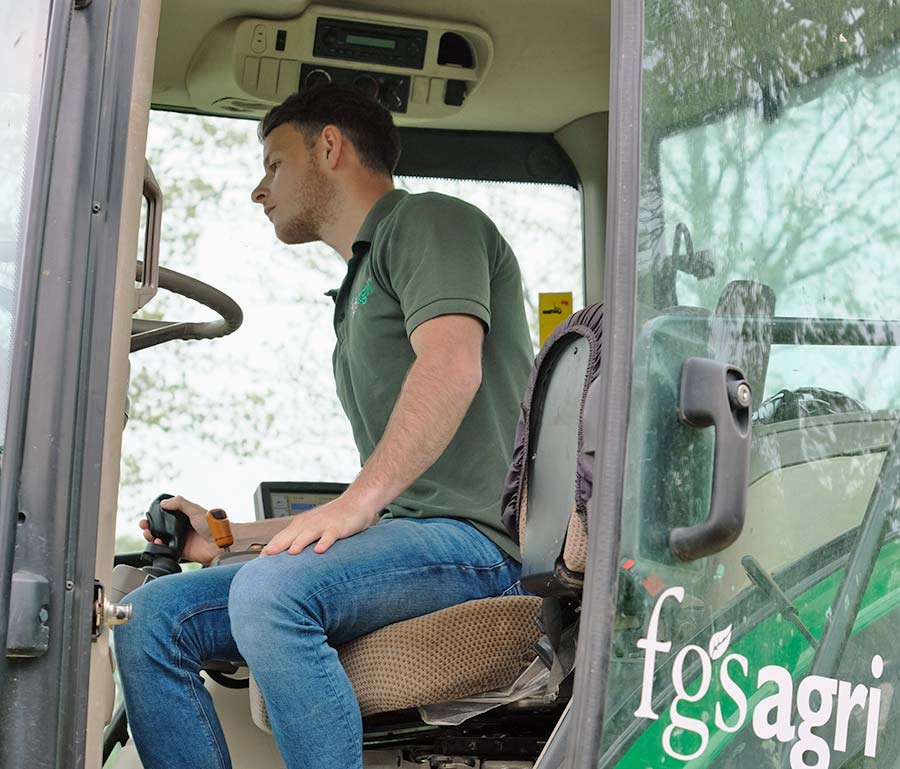 So early on in his life, Nathan has already achieved a decade of success behind the wheel, starting in a go-kart at the age of 12.

“I went go-karting for a mate’s birthday party and smashed it,” says the 22-year-old as he recalls how his racing career began.

“Dad isn’t into racing at all, but I managed to convince him that it would be a good idea to get me into it.”

Just three years later, the young farmer was scrapping for pole position in the junior British Karting Championships and went on to compete in the Belgian National Championships.

Once he had turned 17, he fell in love with a motorsport that combines fast racing on track with rough, off-road sections – Rallycross.

In his first season of battling in the Suzuki Swift Sport Rallycross Championships, he took three podiums – and a year later he won the series.

This major victory propelled him into the 2017 MSA British Rallycross Championships, where Nathan went on to be crowned champion in his debut year.

Such success over a relatively brief stint inevitably meant an even higher calling for the young farmer – RX2, a supporting class to the World Rallycross Championships.

Despite entering an entirely new level of racing, behind the wheel of a car with four times as much power as what he had become used to, Nathan held his own as he raced against some of Europe’s top drivers.

True to form, Nathan, at the helm of a 600hp super-high-spec Citroen DS3, consistently thrust himself into the top 10 of Europe’s finest competitors race after race in a motorsport that is renowned for it’s frenzied and, at times, aggressive racing style.

“Rallycross was something that came very naturally to me from when I was sliding around in my field car on the farm,” explains Nathan. “RX2 was a big step up, but after my first win, I was keen to keep progressing.”

Watch Nathan launch himself into the lead of an RX2 race in South Africa last year, driving his white, orange and green car which starts on the left of the track.

Round the outside ? Favourite first corner this season ?? #dontmindifido #fullsend #rallycross #racing #southafrica

“Everything I had learned as a kid driving around the farm was geared towards this style of racing – I knew a car’s limits and could push to the absolute edge without losing control.

“That Ford Fiesta field car taught me a lot about car control in unpredictable conditions – this helped in Rallycross, where there’s a fast change of terrain from sliding on mud to hitting tarmac.”

2019 brought a fresh challenge for Nathan as he switched to circuit racing for the first time, competing in the Ginetta GT4 Supercup this season with the well-established Century Motorsport team.

Leeds-based Ginetta is a specialist builder of sports cars and racers.

At the command of his right foot Nathan has a 3.7-litre straight-six Ford unit, wielding 350hp to slingshot the featherlight body north of 150mph in a straight line. 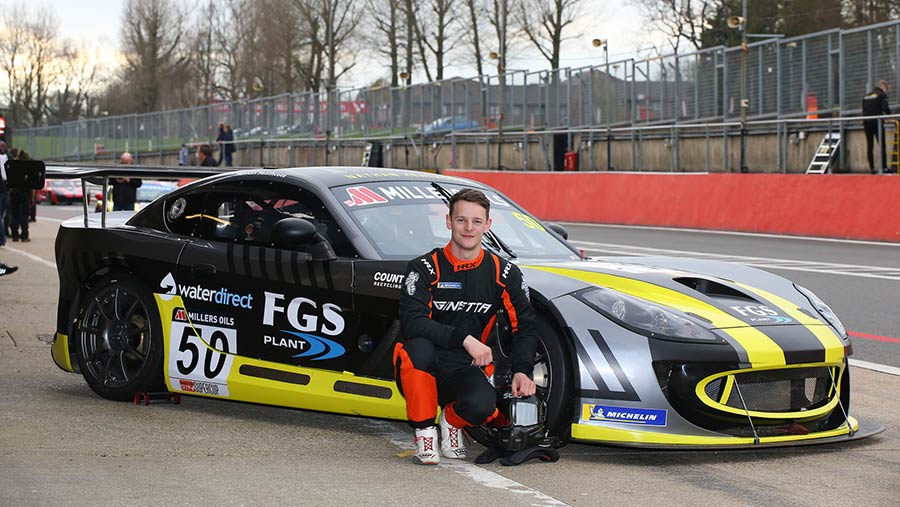 So far, he has enjoyed numerous wins and podium finishes, with the goal of winning the amateur class at the end of his first season this October.

He admits the pressure to win can be a lot to deal with, but he says his farming background has helped to control his nerves and keep emotions on track.

“When I first started racing, my leg would be shaking on the start line. These days I’m pretty chilled before a race – I sometimes have a nap,” he says.

“Mentally, farming is sometimes very similar to racing in that something can happen that is totally out of your control and take you from first to last. It’s that flip of falling from a high to a real low, but you have to keep pushing and not let things get the better of you.” 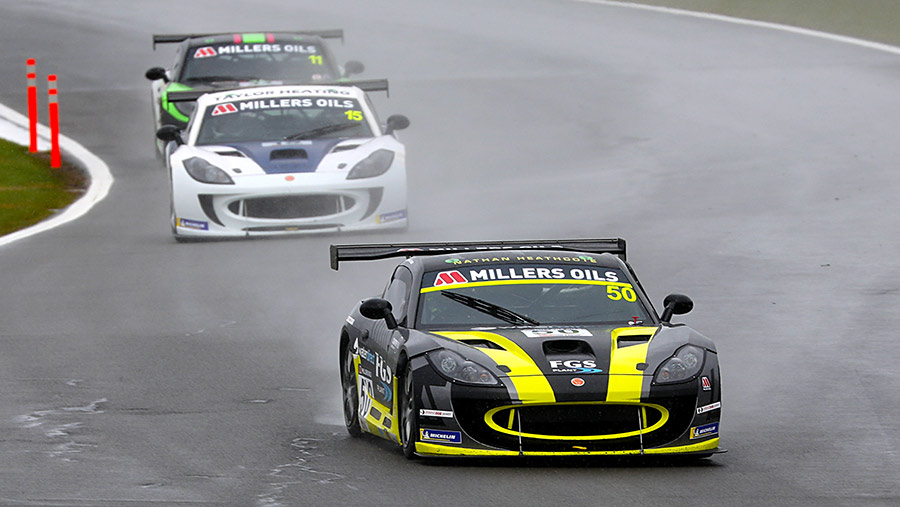 Family and teamwork are two constants for Nathan – whether he is out baling or fighting for the lead in his latest track battle.

His 24-year-old brother – and number on fan – Martin has been supporting him since the beginning and has been to watch as many races as his role in the family’s busy contracting business allows.

“Farming is where I came from and I always get a buzz from it, so if things don’t work out, I always have the family farming business to come back to.”

Q&A: Get to know Nathan Heathcote 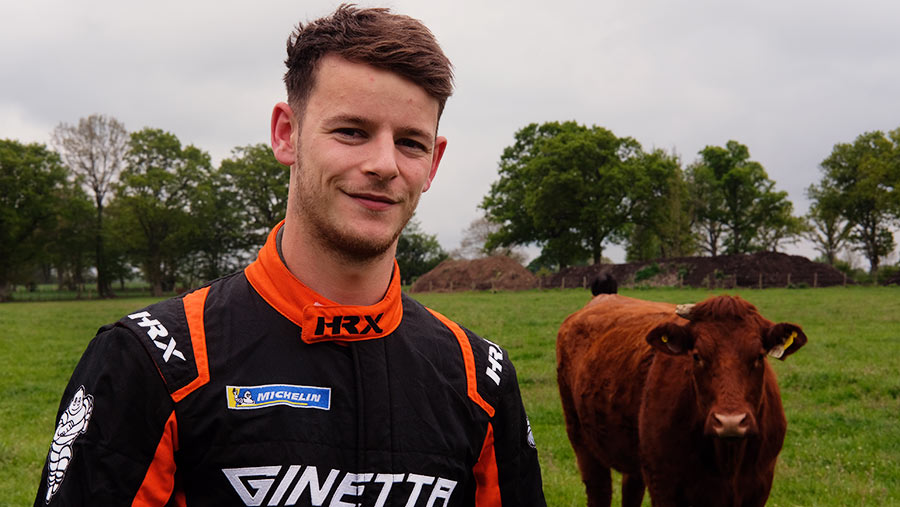