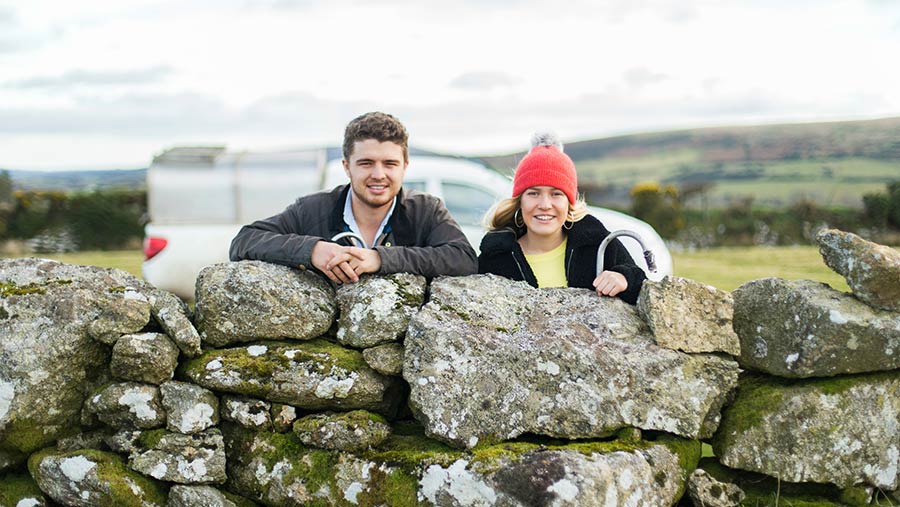 Doing things differently out of necessity, shrewd marketing and endless energy is powering a couple of new entrants to major success.

Three years ago, Lewis Steer and his partner, Flora Searson, committed themselves to building their own farming venture from scratch.

Having secured a £3,000 grant from the Henry Plumb Foundation – a programme that helps young people kick-start their agriculture careers – Lewis and Flora bought 17 Devon and Cornwall Longwool ewes with lambs at foot.

Combined with a hobby flock of Greyface and Whiteface Dartmoor sheep, which Lewis had been building up since his teenage years, the couple are thought to be among the few farmers in the world keeping these rare native breeds commercially.

“These are hardy breeds, built for the Dartmoor area we’re farming, and they do well on few inputs – that suits us well because, as a young business, cashflow is always tight,” explains Lewis.

“They are deemed economically unviable, but these breeds produce something that no other breed can.”

As their flock numbers began to rise rapidly, Lewis and Flora needed to rent more and more land to run the 500 or so sheep they have today, which they graze year-round in the rugged, rolling hills of the Dartmoor National Park.

Neither come from a farming family, which means they had to think creatively to hammer out a business model that works for them.

Drawing on Flora’s marketing prowess as a creative media graduate, they trade as The Dartmoor Shepherd – a trendy, customer-facing brand that’s all about eating sustainable, local produce and linking the public with where their food comes from.

Lewis studied rural land management at university, because at the time he saw being a land agent as the career closest to farming that he could feasibly get into. But being a farmer is something he has dreamed of almost his entire life.

“As a toddler, we all want to be a firefighter, then an astronaut and then a farmer – and that’s what just stuck with me,” says Lewis.

“I was told I could either marry into a farming family or go and make money elsewhere with a view to getting into farming in later life.”

But after his parents rewarded him with three sheep for getting good grades in his GCSE exams, Lewis knew he had to find a way to break into the sector. 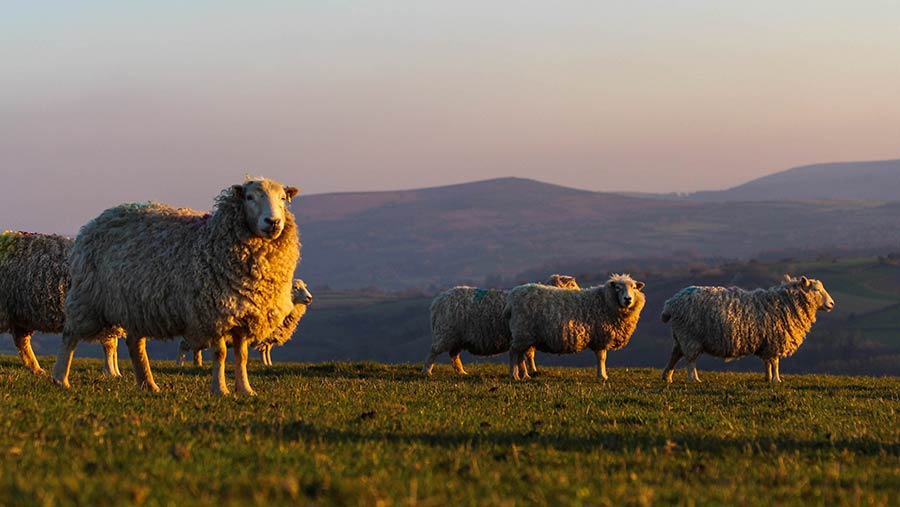 Today Lewis and Flora sell their meat direct to the public, either through a box scheme – with customers as far afield as Scotland – or as a whole-carcass spit roast catering for events. They are also hoping to become part of the Dartmoor farmers’ co-operative.

Their grass-fed hogget is typically slaughtered and sold at 10-18 months. This is a point they actively sell on when speaking to punters at their stand at local shows to drum up business.

They market their produce as a slow-grown, super-high-welfare and flavour-rich meat with intense fat marbling for extra succulence.

“We made a conscious decision to not sell at market, because you have such little control over the price,” says Lewis.

“Farmers are struggling to make ends meet by farming in the conventional ways, so we know we have to do something a bit different. This is why I think that not coming from a farming background is my greatest advantage, as we bring a fresh pair of eyes to trying to create a sustainable and profitable sheep business.”

See also: Video: So you want to… set up a livery yard?

With the flock well established, he’s now looking to trim costs by improving breeding quality with the use of data recording.

Aside from the hogget, the couple also design and sell a wide range of fashion items, accessories and interior furniture made using the woolly skins of their sheep – everything from the classic sheepskin rug to footstools and children’s toys, all made in the South West.

These products are sold online, at country shows and boutique markets, and wholesale to retailers in places such as Bath, Salisbury and south Wales.

The search for land

While the 24-year-olds have their marketing, branding and message off to a fine art, actually farming and producing their products has been far less straightforward. Expansion has been hamstrung by the all-too-common struggle to find affordable land.

Such is the difficulty most new entrants have with getting access to grazing, the pair currently rent about 130ha from 12 different landowners on a variety of agreements, with fields spread over a large area in Dartmoor.

It’s a far from ideal situation, but is the only practical way to get ahead, says Lewis. 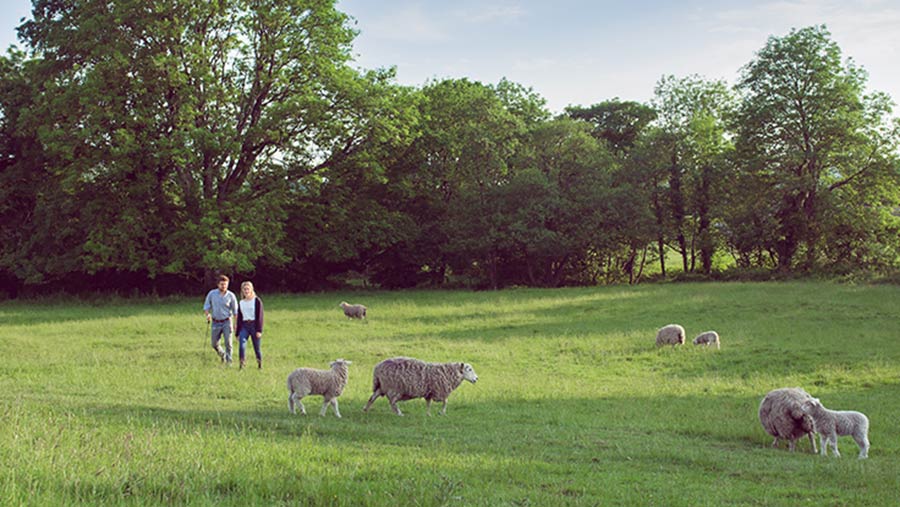 “The biggest barrier has always been access to land. The current system doesn’t help new entrants, and tenancies are hard to come by around here, because it’s mostly Duchy of Cornwall land, which is tough to get into.”

With Brexit looming large over agriculture, they’re hoping for a major shake-up in the near future, which will open up fresh possibilities to grow their venture.

“Current subsidies are supporting some unprofitable businesses – if and when that ends, I hope a lot of better value land will come on to the market to help younger people.

“Subsidy doesn’t even factor into our working cashflow,” adds Lewis, who has ambitions to expand by roughly 200 sheep a year until the flock hits 1,000 breeding ewes.

That means they are on the hunt for more land to rent and there’s also potential to take on an assistant shepherd to help share the mounting workload.

Central to their business plan is a supportive landlord, who approached them last year with an offer of a secure farm business tenancy, which includes 40ha of pasture with an old stonewalled barn they now use as a base. They farm this land under a unique variation of a share farming agreement.

They also have use of a shared office in the market town of Chagford, some 15 miles west of Exeter, from which they run their online sales operation.

If you want to reach customers and get them to buy into what you are offering, telling a good story is the key to success, says Flora.

“People love a story and what we do is such a way of life, so they’re not just buying a sheepskin rug or some meat – they’re buying into us and the work we’re doing,” she explains. 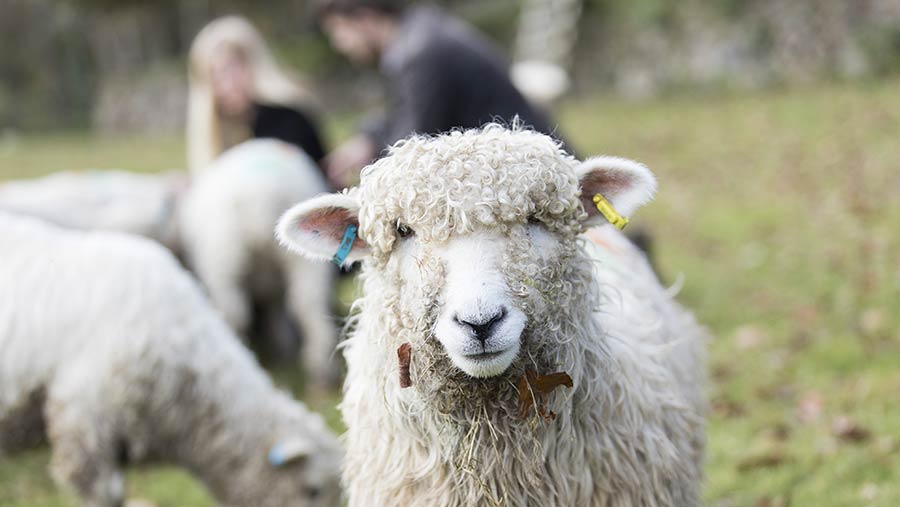 As is commonplace, social media plays a core role in telling The Dartmoor Shepherd’s story.

It helps too that farming is a job and lifestyle that offers ample opportunities for taking photos and videos to share a behind-the-scenes glimpse of Lewis, Flora, their sheep and collie, Moss.

“Everyone has their own unique selling points, so my advice to others is to think about what yours are and use them to your advantage,” says Flora.

“We also spend a lot of time speaking to potential customers at shows and markets, which is important too.”