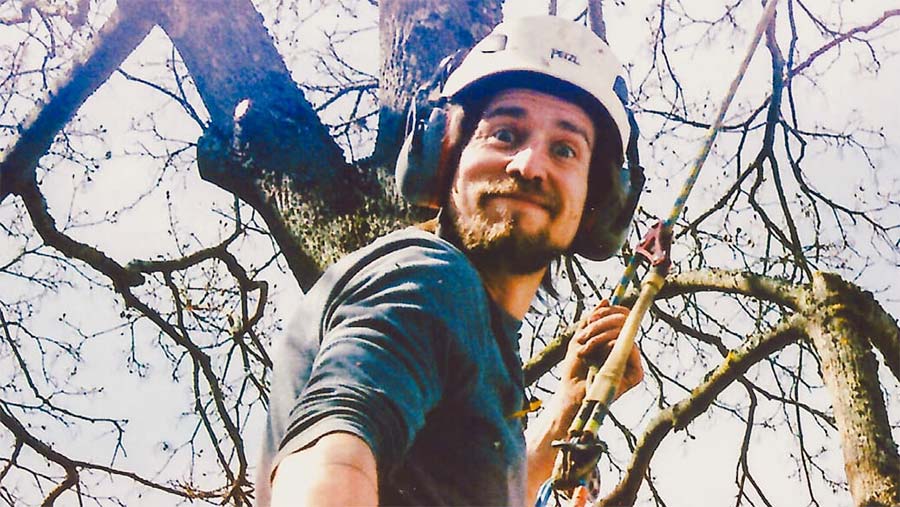 Throughout National Young Farmers Week (30 September-4 October), we are featuring inspirational YFC members who have benefited greatly from being part of the movement. Today, we’re focusing on one Somerset young farmer’s drive to save the planet.

Jack Nicholls may spend his working day chopping down trees as an arborist, but he’s working equally as hard to plant replacements.

The 27-year-old Wedmore YFC member’s work takes him all over the world, but NFYFC’s “Protect your future” campaign is bringing him back to his local club to encourage other members to plant trees.

“I helped our YFC apply for sapling trees from The Woodland Trust a week before NFYFC launched the campaign,” said Jack whose work involves him regularly removing damaged or unsafe trees, as well as unwanted trees.

“When I saw the campaign details I thought it was obviously meant to be. I really want to plant as many trees as possible this November. I’m really passionate about climate change,” he says.

Wedmore YFC has been given 420 young trees of varying species known to encourage wildlife and they will be planted in the wetlands of Somerset.

The club has already chosen two locations where the trees will benefit others, including Chew Valley Rugby and Football Club and  adult learning disability centre the Orchard Vale Trust.

Jack grew up on a dairy farm, but his father sold the cows when he was 15. He decided farming wasn’t for him, but knew he wanted a job outdoors and was interested in animals and conservation.

His enthusiasm for protecting the environment has rubbed off on his fellow club members.

“I explained why trees are important for farmers, as there can sometimes be some resistance to the idea. Members suggested taking cuttings from willow trees, which are native to the area, and planting those in lots of places.

“This is a great idea as the Somerset Levels are pretty much a floodplain and planting willows will help farmers too.”

Jack has worked in Sweden, New Zealand and Australia and says being part of a YFC since he was 10 years old has given him the confidence to expand his horizons.

“I have learned so much with YFC – school taught me the basics, but I learned life skills through YFC. It has been an asset when travelling as it gives you the confidence to talk to people and put yourself out there,” he says.

Jack wants the young farmers community to pull together to help save the planet. Inspired by the impact his own club is making he hopes that in his final year as a member he can spread the environmental message more widely.