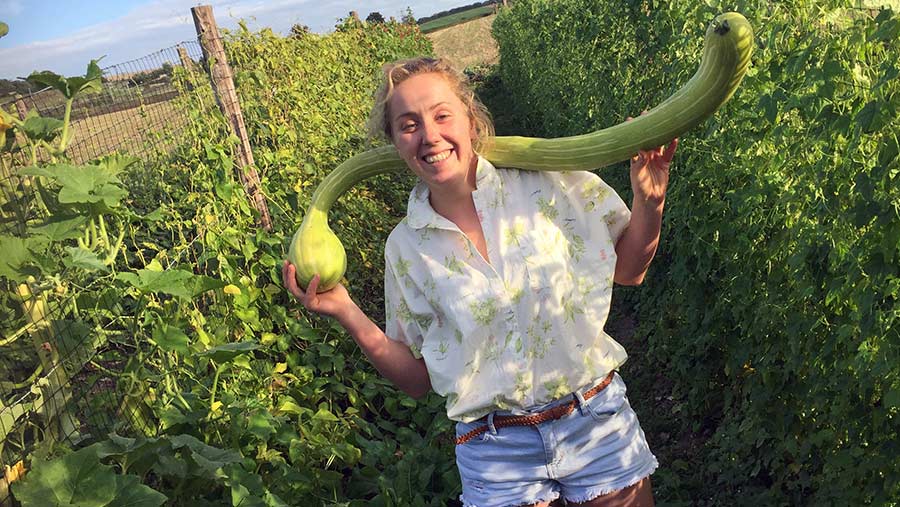 Laura Brady grows more than 150 different varieties of vegetables, fruit, herbs and edible flowers including such “crazy” items as cucamelons and tomatillos.

The former, if you’re wondering, are grape-sized cucumbers patterned like a watermelon, while the latter are a zingy cherry tomato-sized fruit used as an ingredient in salsa.

“I’m addicted to growing weird and wonderful produce,” says the 24-year-old, a passionate cook and traveller who, having graduated from Harper Adams University in 2016, was determined to launch her own business.

The Wonky Parsnip has about 100 restaurants and farm shops across Kent and London on its books.

“There’s a real demand for items that aren’t normally grown in this part of the world and an abundance of restaurants near here want locally sourced produce,” says Laura.

She’s living proof that you don’t need lots of land or a farming background to build a business in the countryside – just a good idea and heaps of drive.

Using just 1 acre at Chartham near Canterbury, which she splits into 1m x 6m plots, and using one small, self-built greenhouse for “propagating some of the more awkward stuff”, her venture is now grabbing the attention of foodies across the South East.

“Every bed has got something different in it and, as soon as it’s harvested, I rip it up and plant something else,” she says. “To keep costs down, I take the approach that if I can’t grow it outside, I won’t grow it.”

From South African gem squash and red sweetcorn to apple mint and lemon coriander, nothing is off limits for Laura.

“We grow conventional vegetables such as carrots and leeks, but they’ll always have a difference – we’ll have a coloured, supersize or super-small variety. We wouldn’t just grow celery, for example – it would be red celery.

“We focus on taste, uniqueness and aesthetic appreciation rather than yield, as a bigger farm would.”

Pretty much all the work is done by hand – “spray-free in sunny Kent” – although she does have a tiny tractor and a 1m wide cultivator with a roller.

Her introduction to many of these exotic items has resulted from her travels – her overseas forays have taken her as far away as Brazil, Alaska, America and all round Asia.

“I like to go travelling and, even when I was growing crops as a hobby, I’d see stuff abroad and wonder if I could grow it at home. I also spend a lot of time researching food online and reading hundreds of seed catalogues.

“There’s a lot of trial-and-error involved. Some things work, some don’t. It’s all about experimenting. I give everything a lot of TLC, though, because if it dies, I don’t earn any money!”

She initially approached restaurants in person. “Going door-to-door was very old-school and a bit scary,” she recalls. “But now we’re growing our social media accounts and increasingly using them to connect with customers. 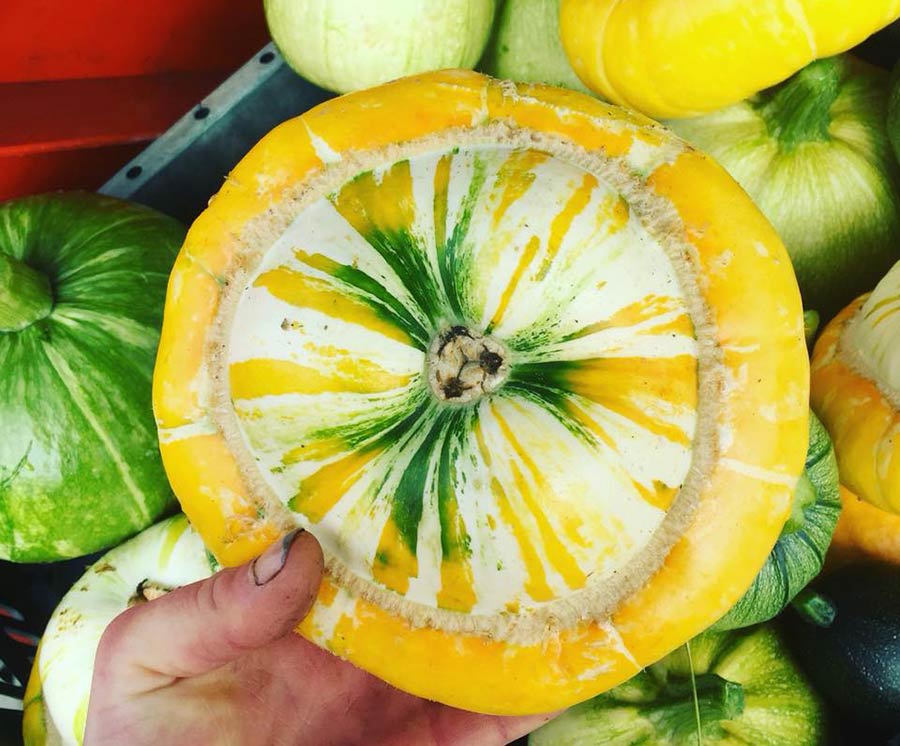 Laura grows unusual veg of all shapes, sizes and colours – including this turks turban

“If you turn up a pub or restaurant, you don’t always get to the chef – and you need to speak to the person who makes the decisions. On social media, you can connect with the chef directly.

“We put a lot of pictures and videos on the internet, too. This combination of a strong social media presence and word-of-mouth promotion means that people now ring us up. Some of the chefs have never seen some of what we grow before – or, if they have, it’s been imported.”

The Wonky Parsnip’s social media presence even led to a call from the BBC’s Saturday Kitchen show, which saw them visit, allowing Laura to make her debut TV appearance. “I was nervous, but we got a good response after it aired.”

Another highlight, she recalls, was being named a runner-up in the farm diversification category of Produced in Kent’s Taste of Kent Awards 2019.

Not from a farming family, she first “got the bug” working on farms when she was at school, before heading to Harper to study Agriculture.

For her placement, she worked for the fresh produce company Emmett, further firing her interest in the sector.

“Last year was ridiculously hard work – I didn’t have a day off all summer,” she recalls. “It was such a hot summer that the bit of money I did make I had to spend on irrigation equipment.

“But it’s inevitable that if you start a business you’ll have a tough couple of years but, once you’ve put all that initial graft in, it should hopefully get easier.”

Now the business is growing – Laura has taken on some part-time help and plans to employ someone to do a delivery round. She’s also considering installing a kitchen on-site and welcoming more visitors to the venue. “If this could make money and have an educational component, it would be a win-win.

“I suppose I could be earning far more money working on other farms, but I like a challenge and I love working for myself as I get to make my own decisions. I’d love to have a big business in a few years providing a lot of jobs for local people.”

The Wonky Parsnip’s selling season starts as early as June with crops such as rainbow mange tout, purple peas and salad crops, and extends right through to December/January when such delights as purple sprouts, white kales and winter squashes are harvested. 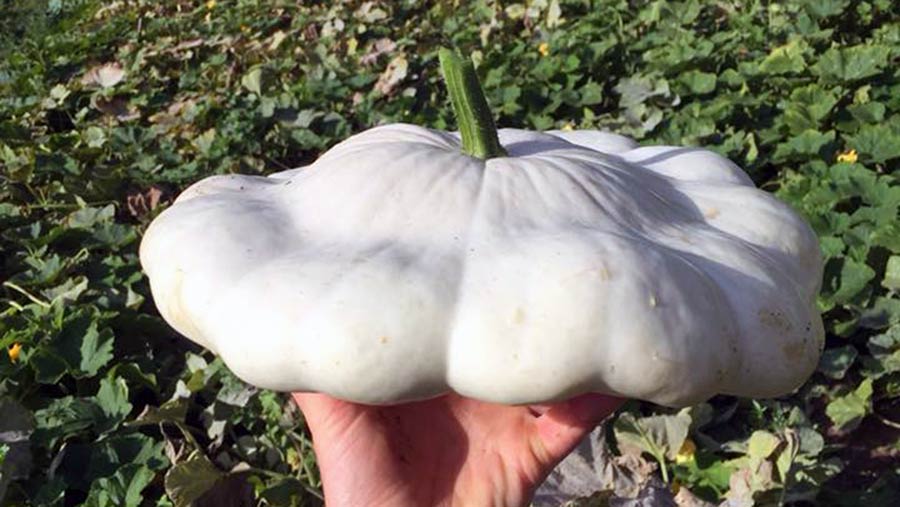 But with the main season running from June to November, Laura gets some downtime in the winter, during which she can pursue her passion for travel.

“I don’t have any spare time to spend money in the summer. Before I went to Harper I worked on an Australian cotton farm for eight months and this spring I went to New Zealand where I was working for a contractor. You always learn new things working for other people, especially overseas.

“Food is fashionable at the moment, so it feels like we’re starting this business at the right time. You notice at farmers’ markets how there’s been a real shift – everyone’s up for trying something new, even the older generation. They don’t think a purple tomato is quite so crazy as they once would have!”

So how does she describe to such people one of the more unusual-sounding items – electric daisies? “They’re edible flowers that make your tongue tingle as if you have eaten 1,000 packets of popping candy – and they’re amazing in cocktails!

Get to know Laura in a minute

What traits do you need to be a successful young entrepreneur?

Super hard-working, versatile and passion for your business. You also need lots of support – and I certainly lucked out when it comes to family, friends and my partner Jo.

Best bit of advice you’ve ever been given?

Not to worry about finishing a to-do list as there is no such thing.

Who do you admire most and why?

There have been many people I have looked up to and who have taught me a lot – from teachers at school to bosses in previous jobs who I’ve learnt a lot from. I admire anyone who has worked hard to achieve their own goals.

Most inspiring place you’ve ever visited and why?

South East Asia. The food is amazing the people are lovely and the history is mind-blowing. We grow a few different things from Mexico, so I’d love to visit there too.

Tell us something about yourself not a lot of people know

I love eating Marmite out of the jar.