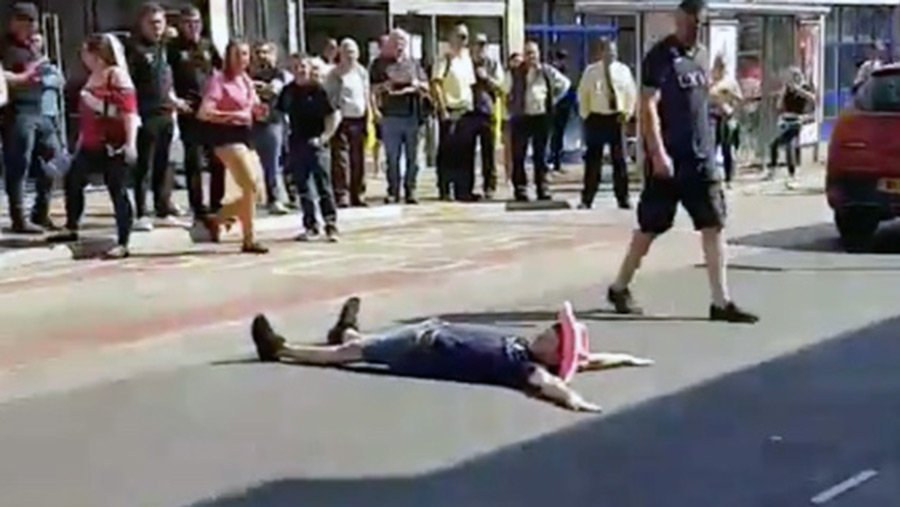 The chairman of the National Federation of Young Farmers Club’s (NFYFC) has apologised for the intimidating antisocial behaviour of some of its members on the streets of Blackpool during the Annual Convention.

National chairman Lynsey Martin said she was “really sad, disappointed and ashamed” after watching and sharing a video which shows a number of YFC members stopping traffic on a busy road, kicking cars and swearing loudly.

She added: “The actions of a few have tarnished the reputation of so many.”

The organisation has said the future viability of the weekend is now in question as a result of this incident.

Security worker Alex Milklos filmed and shared the video on Facebook on Sunday evening (6 May), sparking fury from residents of the Lancashire seaside town.

The video, which has been shared more than 1,000 times, shows one young farmer sneaking up to the open window of a stopped Volkswagen Golf before stealing the keys from the car’s ignition and throwing them into the road.

Another young farmer attempts several times to kick a passing Jaguar car as it drives away from the crowded street.

More than 6,000 young farmers attended the 2018 Annual Convention over the bank holiday weekend (4-6 May).

Watch the video of the incident below (be aware that this footage contains some strong and offensive language).

In a statement on the NFYFC Facebook page, Ms Martin said: “The people intimidating members of the public in this video are not representative of members of the National Federation of Young Farmers’ Clubs and should not be allowed to wear our YFC logo.

“On behalf of the federation, I apologise that some people who came to Blackpool this weekend because of our convention have chosen to behave so appallingly.”

She added that any young farmers identified as being involved in the incident will have their membership of the organisation removed and has asked for anyone with information to contact NFYFC by emailing post@nfyfc.org.uk.

Holiday maker Alan O’Conner, who visited Blackpool during the bank holiday weekend, told Farmers Weekly that the behaviour of some young farmers was “extremely upsetting” for the general public.

“They scream and shout in the streets in the early hours of the morning disturbing others and generally act in an extremely rude and inconsiderate manner. They are very intimidating, particularly to older people and children.”

James Eckley, NFYFC’s chief officer, said the organisation has rules that members are asked to follow and stressed that appalling behaviour would not go unpunished.

“NFYFC has a Code of Conduct that we ask all members to abide by and this policy is printed in the programme guides, communicated through presentations in advance of the event and displayed throughout Blackpool.

“Anyone proven to be acting against this policy can no longer be a member of the Federation. Sadly, the future viability of this weekend event is now under scrutiny due to the reckless actions of a few.”