For young people dreaming of running their own farm business, getting into poultry could be an ideal way to build up cash and experience if land and money are proving hard to come by.

British agriculture faces a dilemma. While interest in farming seems strong among the younger generations, the dream of getting into farming turns to a nightmare when the mammoth costs of buying or renting land and machinery, and building sheds, stores and parlours are laid out.

See also: 8 secrets to progressing up the ag careers ladder

While it isn’t always the most obvious route into agriculture, poultry farming has helped young farmers build up capital to pursue additional ventures, gain an extra income source or create space for themselves in the family farm business.

For Welsh young farmer Tom Parry, breeding and selling point of lay pullets was the ideal way to start small and build up enough money to move into sheep and cattle farming.

Getting into poultry when he was just eight years old, today Tom has about 10 hens and cockerels including breeds that range from the more traditional Gold Laced Barnevelder to ornamentals like the Blue Silkie.

Breeding season runs from March to August, and he sells the pullets at about 19 weeks.

“Dad encouraged me into this from an early age so that I could learn about the business side of farming,” the 23-year-old explains. 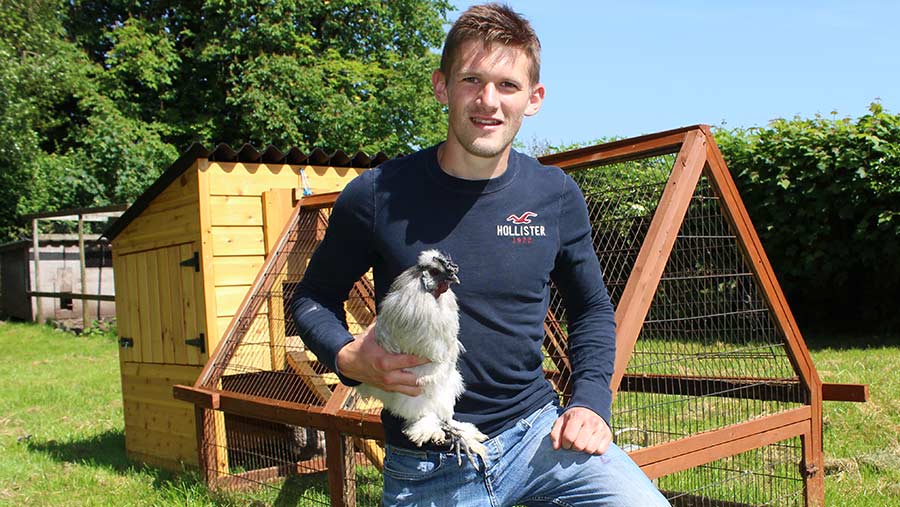 His family’s 85ha beef and sheep farm sits on the northern fringe of the Brecon Beacons, about 40 miles up from Cardiff.

Expanding into sheep and beef

“The poultry enabled me to get enough money together to eventually buy four Belgian Blue calves, which I hand-reared on the bucket,” he says.

At 16, he was able to invest in his first Texels and today has a flock of 40 ewes, alongside 12 pedigree Blonde cattle that he keeps as part of a joint venture with his dad.

Tom points out that compared with sheep, poultry farming requires little investment to get going with a small number of birds, and this can be scaled up quickly once established.

It takes a minimal amount of time each day to keep his birds and the setup is very manageable, even though the peak selling time clashes with the tail end of lambing season.

There are good returns to be had too, he says, thanks to strong demand from the public and businesses looking for animals for their small holdings. He sells hybrid pullets for £15 each, while pure-breds fetch £25.

He has customers who are prepared to travel to buy quality birds coming from across south Wales.

“It’s great selling poultry to a customer base that isn’t solely farmers as this widens your opportunities,” he says.

“Dealing direct with customers can be a great way of building confidence to move on to larger enterprises too, but it’s always great to have as a side business. I love shaking hands with people and doing a deal.”

He admits that he has let his breeding stock numbers dwindle in recent years as the sheep and cattle interests have grown, but now he’s planning to reinvest in this side of his business because he sees it as a way of insulating himself from any negative fallout once the UK withdraws from the European Union.

“There isn’t much that affects the price because the target market is mostly smallholders,” he points out. “The fact that the income stream isn’t really tied to traditional farming is one of the best things about it.” 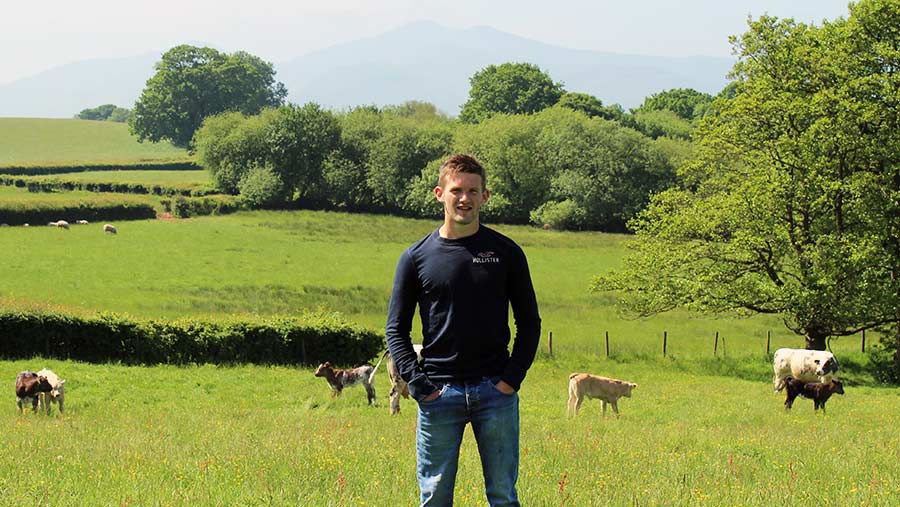 Social media is by far the number-one driver of sales for Tom – along with good old-fashioned word of mouth – with about 40% of total sales taken as pre-orders.

He did have a website for a while, but found it expensive and complicated to maintain compared with the Facebook page he now uses and he advertises his pullets in many online groups.

“The marketing of the birds is really key and social media helps to sell the story behind it all. Good photos are important – they’ve got to look visually impressive to catch the buyer’s eye,” he says.

“People overlook poultry, especially on the scale that I am doing it. I think they make the mistake of assuming that it isn’t worth the time and money, but that’s wrong because you’ve got to start somewhere, you can easily scale up and you can use the money you make to invest in other areas.”

First-generation farmer Will Martin diversified his beef and arable business with the introduction of free-range bronze turkeys for the lucrative Christmas trade.

Based near Truro in Cornwall, he and his wife Kate farm about 100ha of owned and rented land which runs a herd of 80 spring-calving Limousins alongside a small number of pedigree Beef Shorthorns.

Spring barley is grown across about 20ha for livestock feed and bedding.

Six years ago Will started hunting for a diversification to bring some extra income on to the farm, and saw turkeys as a good bet.

His feathered enterprise has grown incredibly fast, going from producing 25 birds to rearing and butchering 800 turkeys for this Christmas.

Poults arrive on the farm in June and are housed in a cattle shed with holes cut in the walls to allow the birds to roam. With an acre of land needed to rear 500 free-range turkeys, Will has plenty of room to expand.

“I wanted to add another income stream to the farm so I got some turkeys and I really enjoyed keeping them. Turkey is a really healthy, lean meat and there’s great demand for it,” Will says. 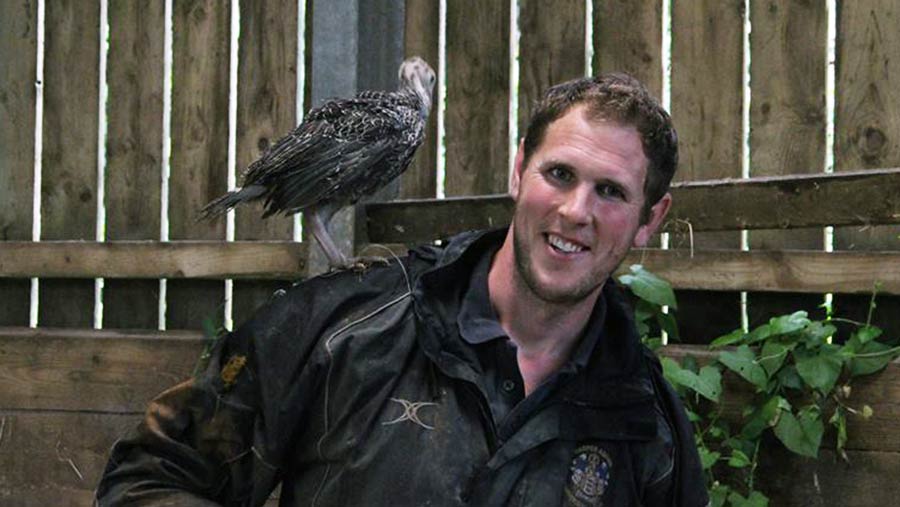 The birds hit maturity at 17 weeks but Will rears his to 24 weeks to improve the fat covering which makes for an extra-tasty turkey.

Final preparations for the festive season begin in early December, with the birds being killed, dry plucked by hand and hung for about two weeks to improve the flavour and give a distinctive dark colouring to the meat.

They are then hand finished and packed with herbs into special boxes ready for collection. About 80% are sold direct to consumers, with the rest sold through butchers and farm shops.

Prices range from £45-£75 depending on weight, and customers can pre-order on the farm’s website with a £20 deposit.

“Turkeys eat a lot of food, so taking pre-orders and deposits throughout the year helps with cash-flow,” he adds.

There’s a lack of understanding when comes to poultry farming that could be at least partly to blame for the sector’s struggle to attract younger generations, according to NFU poultry adviser Aimee Mahony.

That’s precisely why the NFU’s Poultry Industry Programme was set up, bringing together 16 young people from across the sector to inform and inspire the next generation of poultry farmers.

“There is a recruitment problem in the poultry industry, despite the fact that there are roles like assistant manager that pay about £40,000 without the need for prior experience in some cases,” says Aimee.

Poultry makes a great diversification for pretty much any farm, helping to spread risk in times of uncertainty, she adds.

“We are now seeing more arable farms setting up poultry units to support their businesses. There are cases where there isn’t enough work on the family farm to warrant taking on sons or daughters, so they diversify to accommodate them.”

“People perceive it to be less muddy boots farming and perhaps more food production. It’s worth considering if you’re a young person who’s struggling to find a way into farming.”

His family farm near Peterborough has 64,000 free-range layers producing about 60,000 eggs a day for the Happy Egg brand.

The farm was originally all arable, and without enough work to support Thomas joining the family business, a poultry diversification was the clear solution to keep everyone busy.

With each person in the UK consuming about 200 eggs a year, Thomas says there’s solid demand for their produce.

“We work on five-year contracts with prices locked in so it protects us from any major volatility, although feed costs can go up. The main issue that we have is hiring good staff,” he says.