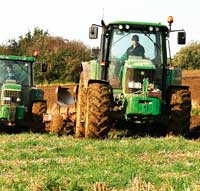 Large-scale commercial farmers are dominating the market for land and farms, as residential or lifestyle farm buyers are now “in retreat” says the Royal Institution of Chartered Surveyors.

The RICS’ Rural Market Survey reveals that for the first half of the year, nearly a quarter more land agents reported strong demand from farmer buyers. The report also suggests that overseas demand for UK farmland – particularly from the Republic of Ireland – has declined sharply.

However, the survey also found that farmland values continued to weaken, although the rate of decline had slowed. The opinion-based survey showed values for bare farmland shrank by 1%, with the weighted average falling from £4992/acre to £4925/acre.

Arable land fell 1% to £5295/acre while pastureland fell 2% to £4556/acre. However, RICS said that falling supply in the farmland market was providing some support to prices.

RICS’ transaction-based measure, which includes residential farmland, showed a greater fall in prices with the weighted average falling 7.5% to £6116/acre.

Julian Sayers, director of Adkin Rural & Commercial and a spokesman for RICS, said: “While the economic climate remains so uncertain, it is improbable we will see demand for rural retreats return to pre-recession levels. As a result, residential land prices look likely to remain depressed for some time to come.

“The improvement in commercial land is encouraging; however with the downward pressure on arable [commodity] prices we are currently seeing and the lack of foreign demand there is a risk that this more favourable trend could run out of steam.”

The RICS report said the number of farmland transactions fell by 43% in the first half of the year to 159 reported sales. It estimated that individual farmers’ share of purchases grew 2% to 62%.

In Scotland, the report found that farmland prices fell by 7% in the first six months of the year, the same rate of decline seen in the second half of 2008. Demand for all farm types fell sharply and fewer farms were bought by agricultural businesses.