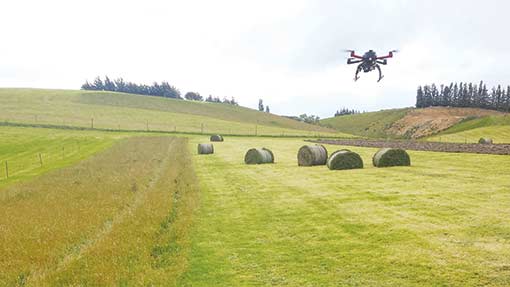 New Zealand farmer Neil Gardyne changed the way he farmed his upland sheep, beef and arable farm after seeing a drone in action on a documentary on the war in Afghanistan.

“I was watching the documentary with my son Mark, and we were looking at how drones were being operated for military purposes. It got us thinking how we could use such technology on our farm,” he says.

He visualised drones (unmanned aerial vehicles) being used to assess cast sheep on his 466ha hill unit in the Otama Valley, near Gore, Mr Gardyne explains:

“We lose a percentage of cast sheep on our hills every year and it takes us two hours on a quad to get around all of our land, some of which isn’t easy to access.

“Added to that, in New Zealand, eight people are killed on quad bikes every year and more than 800 others are injured. So we were keen to find a tool that improved safety while at the same time reduced expense. This was where the drone fitted in.”

It took a year for Mr Gardyne to work out which drone he wanted before opting for the Chinese-made Hexacopter, which he imported from America at a cost of $4,000.

The drone selected was a high-spec machine powered by rechargeable lithium batteries and carrying two cameras. It can be operated manually within a range of 3km or can be flown on a fully independent flight with unlimited coverage and a flying time of 20 minutes. Mr Gardyne says the technology is so easy to use.

“The drone came with a simulator, but we’ve never had to use that. It really is a simple tool.”

However, he stresses the drone is not a toy, but rather a farm implement. “We treat using the drone as a farm job, as though we were heading out on a quad. The use of drones may have its sceptics, but this is just like the introduction of the tractor after the horse,” he says.

The Hexacopter is now being used successfully on the farm to assess cast sheep.

There are also 43 water troughs on the farm that need checking for leakages and Mr Gardyne does this by inputting the trough co-ordinates from Google Earth, allowing the drone to be sent out on a pre-programmed mission.

“A lot of the tasks we want the drone to perform need to be in real time.

“When the drone goes out of range we can use goggles to get a live picture; when it’s in range it can be viewed via the goggles, TV or computer,” he adds.

Mr Gardyne has also found an additional 46 applications for the drone.

“Every month we have to count sheep. So we have adapted software that has been used to count penguins in Antarctica.

“We then use this data to get the correct stocking rate for individual paddocks.”

Other drone jobs include observing weeds – in particular knotting thistles. These are checked every three weeks during the summer, allowing targeted treatment at the correct time. “The drone has saved us a lot of time,” he says.

An exciting new development is the ability to measure grass dry matter (DM) using the drone.

Mr Gardyne says plate metering the farm would be impossible, so instead he is working with scientists to develop this as a specific application.

“We plan on creating a base figure by plate metering 10% of the farm. We will then feed this into a system and, once we have the base figure, the drone will be able to tell us whether we are trending up or down.

“From this we can then make a proactive decision for stock management, so we can maximise first-quality grass and quantity,” he explains.

To maximise lamb growth Mr Gardyne is aiming for lambs to be grazing fields at 1,200kg DM/ha. He says if lambs were being put in at 1,400kg DM/ha the quality would have dropped affecting finishing times.

“It can take 10 days to physically see this difference in DM and the average farmer would be 20 days late spotting it. So if we used the drone we could detect smaller changes much quicker,” he says.

Although the technology to measure grass DM is still in development, Mr Gardyne reckons it will be available within the next 15 months. Once developed, this will be a tool he uses twice a week at the height of the grass growing season.

“I reckon when we have developed an application for measuring DM using the drone, we will see use of drones slowly gains traction.”

And for an initial outlay of $4,000 Mr Gardyne reckons it has saved him 5% of costs on the farm by nearly halving the use of the quad bike.

“Drones may save 80% of travel time on the quad, but when we factor in the times we have to go and fix a leaky water trough or deal with a cast ewe, the more realistic figure is 45%.

It may seem far-fetched, but Mr Gardyne reckons in the next five years drones will be delivering machinery parts from his local dealer or even takeaway meals. “We live 30km away from our nearest town so it has real potential for us.”

He also visualises it being used to get closer to the consumer. “Drones could give consumers access to where their food comes from. A consumer could view live images from the farm and see how animals are reared and how sustainable farming is.

“It is also part of the journey to becoming carbon-zero. Drones really are the future of food,” he says.

At the moment there is currently no regulation in New Zealand about the use of drones, but Mr Gardyne is working with the Civil Aviation Authority (CAA) to try and get some regulation together.

“We have had some kick-back from commercial operations and my son has also been challenged by some people worried about their privacy. However, it is a positive news story and can have potential in search-and-rescue operations; we just need to get that message across.”