In the second of our series Farming on the Front Line, Farmers Weekly heads south to hear more about farming in the Falkland Islands, some 35 years after the end of the war with Argentina

Farming in the Falklands is not for the faint hearted.

The climate can be extreme, it’s a long way from, well, anywhere, and penguins outnumber people by a factor of over 300 to one.

But for some it represents the kind of lifestyle and challenge that they have always hankered for. 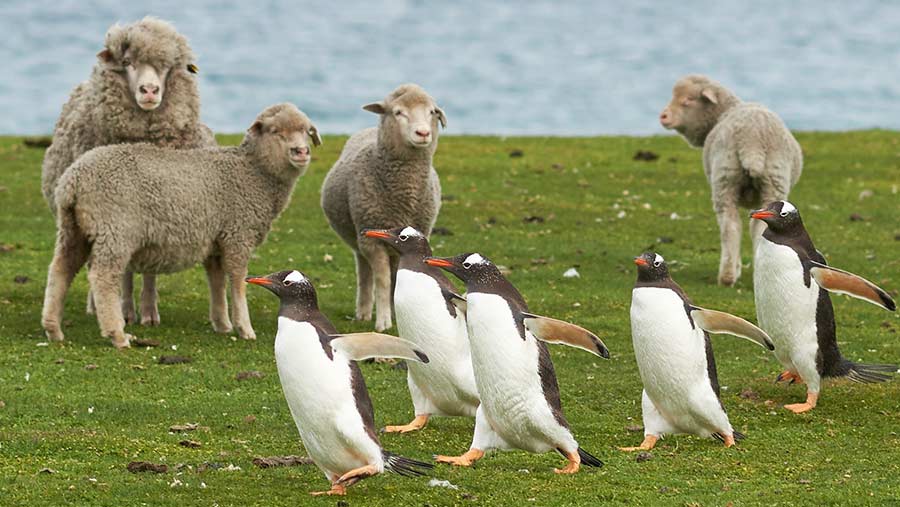 One such individual is Hew Grierson, who grew up in the west of Scotland and came to the Falkland Islands in 1991 as a shearer.

“I immediately liked the Islands and stayed on as there was always plenty of farm work available,” he says. “But when Blue Beach Farm came on to the market in 2000, I jumped at the opportunity to own my own place.”

In all, the farm runs to about 7,000ha, which is actually quite small by local standards. Average farm size in the Falklands is double that, and the largest unit actually tops 150,000ha.

Situated on the shores of San Carlos water towards the north of East Falkland, the farm climbs steeply into the surrounding hills, peaking at 250m (800ft). Sheep production is the mainstay of the business – just as it is for the islands as a whole (see panel story).

“I run around 5,000 merino sheep, as well as wintering 160 Angus beef cattle,” says Mr Grierson. “The land has low fertility so we work hard to rotate the livestock, resting paddocks to maximise their productivity. The majority of our grazing is on natural pasture with native plants.”

The extensive nature of livestock production means that animals are outdoors all year around, including lambing. In the summer the winds can be particularly strong, and a daily “wind chill factor for newly shorn sheep” is announced in all weather forecasts on Falklands Radio.

With dry summers and wet winters, the farm also has small areas with fodder crops and perennial grasses, which are used to supplement native pasture at times when livestock need a boost. 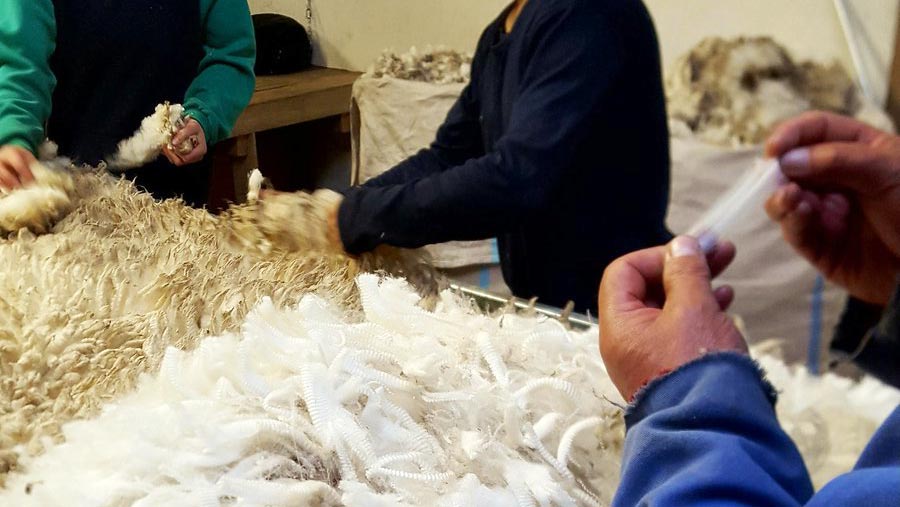 “These conditions produce very white wool, which is popular with buyers. I produce 20t of greasy merino wool in a micron range from 18.3 to 23, using Australian Centre Plus Merino bloodlines.”

Quality is very much the objective – both for the wool which is sold to The Falkland Islands Wool Company, and for the Waigroup Angus beef, originally shipped in from New Zealand, which is sent to the local EU-approved abattoir.

With such a small domestic population – just 3,200 islanders – the emphasis for the local agricultural industry is very much on export, says Falkland Islands’ government spokesman in the UK, Matt Ware.

“Globally, there is increasing demand for quality produce with environmental provenance, and the Falkland Islands are well-placed given their pristine, pollution-free environment, complimented by de facto organic and extensive production methods,” he says.

“The challenges to overcome are the logistics of transporting fresh produce long distances, as opposed to lower value frozen product. There is also the threat of potential new tariffs on UK agricultural goods post Brexit, should the UK fail to strike a free-trade deal with the EU. This would apply equally to farm produce originating in the Falkland Islands.”

Despite this, Mr Grierson is upbeat about life on the Falklands. “There is plenty of opportunity here and I enjoy the challenge of breeding sheep, cattle and dogs to suit our environment,” he says. “I am proud of the fine white wool I produce and my tasty Angus beef. With advances in grazing management, livestock genetics and global wool prices, we are looking forward to a bright future.”

Sheep farming in the Falkland Islands

Think of countries associated with sheep production and it is places like Wales, Australia and New Zealand that probably spring to mind.

But when it comes to numbers of sheep per head of human population, it is actually the Falkland Islands which top the chart. Sheep numbers currently stand at around 490,000 and, given the islands’ tiny population of just 3,200 citizens, that works out at an impressive 153 sheep per inhabitant.

Sheep are clearly well suited to the environment, which can be likened to that of Dartmoor or mid-Wales, with mountains rising to 700m (2,300ft). That is perhaps not surprising, given that the Falkland Islands lie at a very similar latitude to South Wales on the other side of the equator.

But while the landscape may be familiar, the climate is somewhat harsher, given the absence of the Gulf Stream and the fact the islands straddle the sub-Antarctic oceanic and tundra climate zones. The weather is less seasonal than in the UK, but the daylight intensity is high and winds are stronger.

Cheviot sheep were introduced in 1851 by the Falkland Islands Company to produce wool, with numbers peaking at 807,000 head at the end of the 19th century.

In 1982 a large proportion of farm animals were killed for food by the occupying Argentinian forces, though the following year an extraordinary “Noah’s Ark” of donated replacement animals was sent by UK farmers, and their progeny are still traceable today. 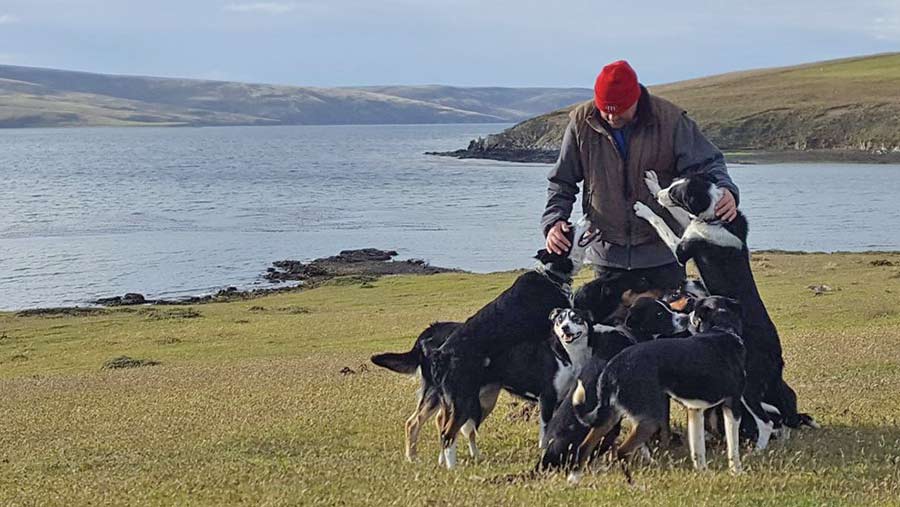 There is now an emphasis on research and development, overseen by the islands’ department of agriculture’s research centre, which has reversed decades of underinvestment and led to improvements in animal genetics and pasture management.

A National Sheep Stud Flock and National Beef Herd have also been created to improve both the quality of sheep wool and the meat.

Improved pastures and genetics facilitated the import of Polwarth sheep from Australia in 1992, resulting in a more valuable, lower wool micron levels, averaging 24.5. A programme of artificial insemination and embryo transfers has sped up the improvement in wool and meat qualities.

Livestock are processed through the islands’ EU-approved abattoir, which offers improved processing and revenue opportunities to supply quality meat. 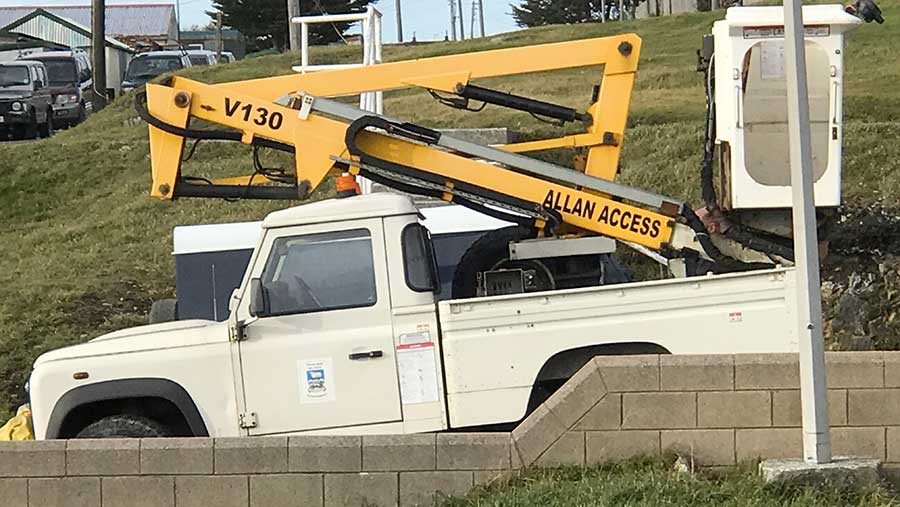 Roads in the Falkland Islands are a relatively new phenomena. The main settlements are now connected by a network of around 620 miles of gravel roads built since 1982, but only the streets in the capital, Stanley, are fully paved, along with part of the road to Mount Pleasant airport.

Elsewhere in the countryside, or “camp” as it is known locally, it is all off-road. The result is the highest rate of four-wheel drive ownership in the world.

With low tax diesel at 52p per litre, virtually every vehicle is 4WD, and the local favourite is the trusty Land Rover. And given the islanders’ ability to “make do and mend”, a complete range of historic and vintage models can be seen in daily use across the islands.

There is also an array of models: from a 1955 Series 1 to a Series 11A. Land Rover 90s, 110s and Defender 90s, 110s and 130s are in use. And there are specialist modifications for the police, fire, ambulance, military, construction and farming sectors.

The Land Rover has developed an almost cult status, resulting in a Facebook Page Land Rovers of the Falkland Islands, followed by a book of the same name by Jean and Denis Crankshaw in 2016.

When driving in the Falkland Islands it is essential to practice the polite and understated art of gently “raising the Falkland finger” greeting to all passing motorists.