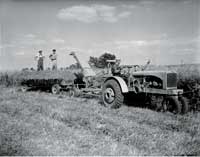 When Farmers Weekly went to press for the first time, average farmland values were about £30/acre, with more than half a million acres traded each year. Catherine Paice explores how 75 years have shaped the market for farmland

There was barely a British farmland market until the years after World War Two. Up to 1948 there had been a fairly sharp increase in prices, but they levelled off again and until 1957 showed an annual average price increase of less than 1%.

For the next seven years values bounced higher, this time by about 17% a year. Prices continued to rise until 1970 but at a much slower rate and that year, for the first time in 15 years, they fell – but as has often been the case, it was a short-term adjustment.

The upward trend resumed the following year, and then values suddenly more than doubled in 1972 – the year before Britain joined the European Economic Community – and continued to rise as farmers began to reap the benefits of the Common Agricultural Policy.

In 1974, the property journal Farmland Market was launched by Farmers Weekly jointly with Estates Gazette, which had both for many years reported sales of farms and farmland, to monitor the now-dramatic changes in the market.

Having bumped along at little more than £40/acre (current value at that time) for decades, the journal was already predicting an upsurge to £1000/acre for farms with vacant possession. Even then, the major factors determining prices were non-agricultural, although corn prices were high.

Balancing farming’s uncertainty, however, were other factors led by soaring cost of inflation (24%), the state of the stock market, political uncertainty and the declining value of the pound – all of which were encouraging investment in land and tipping the balance in favour of demand.

The publication of the Northfield Report found that by 1977, almost 25% of agricultural land in the eastern counties, and 20% of Scotland, was owned by insurance companies, pension funds and property unit trusts.

Institutions almost quadrupled the land under their ownership during the decade – almost all of it tenanted – and by 1979 they owned well over half a million acres, or 1.2% of all agricultural land.

The report concluded the institutions were in the sector for the long term, and did not believe they were primarily responsible for high land prices. But it acknowledged they enjoyed tax advantages as well as rental growth – and was concerned at the trend towards in-hand farming.

The market found out to its cost “long term” in City parlance generally meant 10 years at the most, and there was no need for many of the fears about the structure of the industry that were being addressed by the Northfield Report.

The first half of the 1980s were characterised by a large-scale withdrawal of these institutions, which brought thousands of acres, in volumes hitherto unseen, to the market in huge “portfolios”. At that time, around 1.5% of agricultural land was up for sale annually – broadly 500,000 acres, compared with just 185,000 acres last year.

The 1990s brought serious decline as interest rates peaked at 15%, the City crashed and major cutbacks were planned for the CAP. Once again, however, it was a short-lived slump. The wider property market recovered in the mid-1990s, and land values peaked again at over £2400/acre as farming profitability increased on the back of high wheat prices.

In 2001, the land market ground to a halt almost completely, as the nation was hit by foot-and-mouth disease.

Land in the UK has always been seen as relatively cheap compared with other European countries; even in 1980 it was thought that foreigners owned up to 500,000 acres – but it was mostly poor-quality agricultural land in the Highlands of Scotland, often bought for sporting or investment purposes.

Another major influence on the market has been the national smallholdings estate. In 1977, local authorities were providing 9346 smallholdings on an area of 426,700 acres. Rather than expand them, as the Northfield Report recommended, the ongoing booms in development and land prices have provided councils with the opportunity to swell their coffers at the expense of their farmland. They now own less than half that volume.

Much of it has gone out of agriculture, a factor that has further contributed to the contraction of the land market, with scarcity still driving the market to unprecedented levels – even during the economic recession of the past year.