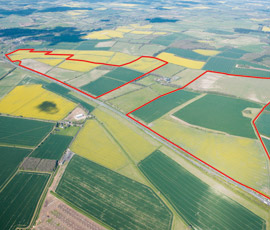 More than 650 acres of bare arable land is set to hit the market shortly in Hampshire. Lying between Whitchurch and Bullington Cross to the north of Winchester, the land is at Tufton Warren and is available in two main lots of 344 acres and 309 acres.

Bordering the eastern side of the A34 dual carriageway, it has large field sizes and includes a modern grain store with 2,000t of on-floor storage, grain drying facilities and a three-bay straw storage building.

The land has been well managed under a contract farming agreement as part of a cereal rotation providing high yields of first wheats, oilseed rape and winter barley, said George Syrett of Savills, Winchester.

All of the land is grade three, of Andover Series one and two soils which are free draining, chalky loam over chalk. Single farm payment entitlements are included in the £5m guide price.

There are two small grazing paddocks and the four small woods which are included give the potential for a small pheasant and partridge shoot.

“I can’t remember the last time a block of bare land like this came on the market in Hampshire – we expect good competition for it,” said Mr Syrett.

“The size and shape of this farm, together with the current margins in cereal production and strength of the farmland rental market will bring forward a range of land hungry buyers.”

The land at is part of an Entry Level Scheme and Countryside Stewardship Scheme together with a Farm Woodland Premium Scheme. (Savills 01962 841 842)

Carter Jonas also has more than 40ha (101.45acres) of bare arable land on the market, part of the Birtsmorton Estate near Malvern in Worcestershire.

The grade 2 and 3 land is of medium to heavy soils and ring fenced in three fairly equal enclosures. It is mostly flat and has road frontage with access on two sides.

Selling agent Steven McLaughlin of Carter Jonas has set a guide price of £650,000.