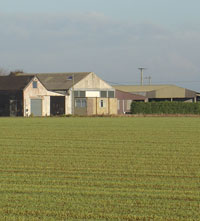 Will Barker of Lincolnshire agent Pygott & Crone is determined to fight back against what he sees as “doom and gloom” in the land and property market with an interesting bundle of seven blocks of land.

“They’re not big acreages, but I’m optimistic for them.” The land available ranges from a three-acre field at Kirton near Boston to a 32-acre block with buildings at Heckington, near Sleaford. “They’re all instructions we have received since New Year’s Day,” said Mr Barker.

The smaller blocks of land were not aimed exclusively at the so-called pony-paddock market, but would nevertheless attract some interest, Mr Barker said. “When farmland was worth £2500/acre, land in grass could often find £10,000/acre to those buyers, but given the upswing in the market in the past two years, and the credit crisis, pony paddock land has slipped back to £7500-£8000/acre and maybe even less.”

There were other buyers to whom the smaller blocks would appeal, Mr Barker said, pointing to individuals who wanted to own land for weekend amenity use or to pursue a dream like the characters in TV’s The Good Life. “We have guided that block at £5000-5500/acre.”

The biggest block of land at Heckington had received five viewings already, Mr Barker said. There was a derelict house and some buildings. “It really isn’t all doom and gloom. There are smallholding buyers and neighbouring farmers wanting to expand. Blocks of land of this size are manageable chunks to absorb for many businesses, particularly with base rates now at 1.5%.” The land at Heckington has been guided at £230,000 as a whole.

His portfolio included a further 40 acres also near Heckington. “There may well be one buyer for the whole 70-acre block. Some might not want to come five or 10 miles for 30-acres, but might well consider it for 70.”