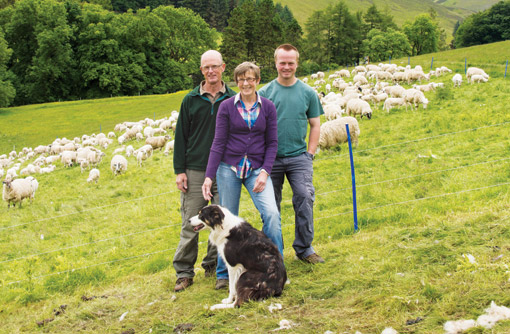 Adopting a New Zealand-style grazing system is providing optimum use of grass on a Scottish hill farm.

Grazing 180 ewes with twin lambs on an area 40m x 40m may sound extreme, but it’s part of an ongoing evaluation of rotational grazing systems under way at the Welsh family’s farm near Biggar, Peeblesshire.

The system is providing sheep with a daily intake of high-quality grass and then allowing the pasture the optimum opportunity to recover in preparation for its next “mob” grazing about 18 days later.

Tom Welsh, who farms with his parents Sandy and Ann, runs 900 hill ewes. Most are now easy care wool-shedding crosses bred up from Scottish Blackface, with about 700 of the ewes performance recorded.

After spending two years in New Zealand, Tom Welsh returned home in 2008 and was keen to try rotational grazing. “We wanted a grazing system to give us greater control of the way we managed the grass. We needed to hit it hard and prevent areas getting away and losing feed quality,” says Mr Welsh.

“No matter how you graze a field in May and June, you get good-quality grass and plenty of it at the start of the summer, but how a field is grazed in the early season impacts on the quality available in July and August. Rotational grazing boosts the quality of grass in late summer. It’s better quality and there’s more of it over a longer grazing period,” he says.

The current system is based on field sizes ranging from 1-10ha, with electric fencing used to divide larger fields. Although stocking rates and the length of time ewes remain on a particular area depends on the amount of grass available, a typical scenario after lambing would see 200 ewes and lambs on a 4ha field for perhaps two days – and then moved on.

“As the summer progresses and grass growth is faster, we could have the same number of sheep in a 4ha field for up to 10 days. It’s a system that doesn’t have hard and fast rules; you just have to be aware of the amount of grass being grazed at the time and what’s in front of the flock. Adjustments to the rotation are made accordingly to maintain the quality of grass provided for the sheep.”

Mr Welsh says it’s surprising how many sheep are needed on a particular area to enable them to graze it sufficiently well enough and to make the best use of the grass available.

“Rotational grazing is providing sheep with fresh grass and not grass that another sheep has just grazed. A conventional set-stocked system lets sheep selectively graze the sweetest and fastest-growing plants – in other words the most productive – leaving behind a lot of grass of poorer quality. The rotational system ensures all species are eaten down so the highly digestible grasses get a chance to out-compete the weed grasses.”

The “cell” grazing system is being tried for the first time this year on an 8ha field that was direct-drilled with Italian ryegrass last summer and then set-stocked. But sheep were taking out the ryegrass and not the hill grasses.

“We wanted to graze this block more intensively so we’re using electric fencing to create restricted areas of grazing – which have been as tight as 40m x 40m carrying 180 ewes and twin lambs. This was to hit the grass which was getting up to almost knee height.”

The mob is shifted daily, taking about an hour including moving fences and water troughs. The cell-grazed field is currently stocked at 9.5 ewes an acre, but has been up to 12 ewes an acre. The rest of the farm is stocked at 6-7 ewes an acre.

While the allocated area is left totally bare by the sheep at the end of each day, within three days the pasture is re-generating with “bright green shoots”.

“It’s showing just how much regrowth is being grazed even when we are rotating on a three- or four-day system. Moving sheep daily avoids depleting the grasses’ reserves and so enables optimum recovery once the sheep have been taken off.

“A set-stocked system means sheep hammer all the new shoots into the ground and leave anything longer and less palatable to run to seed and lose feed quality,” says Mr Welsh.