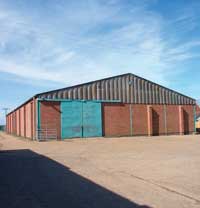 An interesting commercial farm to the west of Norwich is coming to the market with Savills.

Church Farm at Cranworth has 362 acres of arable land with a small, five-acre block of woodland. The Grade 3 soils are contract-farmed by a local grower and cropping includes cereals, pulses and sugar beet.

There is no house, although an attractive barn conversion nearby is on the market at the same time.

As well as its agricultural use, the farm benefits from revenue from Countryside Stewardship and Entry Level agri-environmental schemes, and has garnered further income from letting light industrial space.

“The vendor has converted a grain store into a large area of commercial space, which has returned an income of £20,000 a year. There are also two roller-shuttered workshops which could also be let,” said Savills’ Christopher Miles.

Church Farm’s land is gently rolling with a central, private road linking all fields. There are no footpaths. A small shoot is run in conjunction with a neighbouring farm.

Mr Miles is guiding the farm at £1.9m or £5250/acre. “But I think there is a good chance it could achieve more. We’ve had some significant interest already.”