An exceptional Northumberland arable and stock farm has become the second largest farm to come to the market in the past 40 years. The 5,933-acre Hettons and Hortons Estate is nestled neatly between the rugged Northumberland coastline and the foot of the Cheviot hills – the northern end of the Pennines.

It may not sound the most likely location for a large scale arable farm, but don’t be fooled. With some 4,327 acres of productive Grade 3 arable land, currently growing cereals, oilseed rape, seed potatoes and vining peas, the estate is sure to appeal to serious farming investors, James Laing of selling agent Strutt & Parker said.

“The 12,000-acre Warter Priory Farm in Yorkshire 10 years ago was the biggest estate to be sold, but since then there’s been nothing of the size of Hettons and Hortons – the nearest was Essex Farms last year. It really is the jewel of anything that’s been on the market this year.”

Average field size across the estate is approaching 40 acres, and there is one of 150 acres, he said. Just under a quarter of the arable area is irrigated and there is also 5,000t of on-floor and bin grain storage, plus continuous flow drier.

“The land’s strong enough to yield well, but light enough to be workable,” said Ian Hall who has been farm manager there for 30 years. “It’s mainly sandy or clay loam, and even though there is some heavier land, we’ve never had problems getting it worked down, even in wet years like this.” 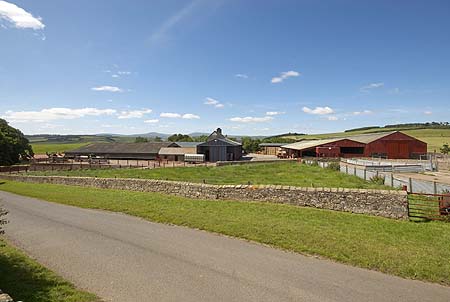 The main handling facility at West Horton can house 1000-head of cattle and there are five further steadings over the estate suitable for livestock accommodation. The farm’s silage clamp is capable of holding a massive 14,000t of silage and while the area is within an Nitrate Vulnerable Zone, there should be more than enough arable land to spread all the farm’s manure and stay well within NVZ rules.

The whole estate is in the Entry Level Scheme and has plenty of potential to expand the current small shoot, Mr Laing added. There are 396 acres of woodland and shelter belts, plus the River Till, a tributary of the Tweed, forms the southern boundary of the farm, offering salmon and trout fishing.

While Hettons & Hortons may lack the grand house that so often accompanies £30m estates, the sale does include two traditional stone farmhouses – one with five bedrooms, the other with three – and 15 smaller stone cottages, let on a range of different occupancy agreements.

The Hettons and Hortons Estate forms part of the much larger Lilburn Estate (the third highest Single Payment recipient in the country), owned by Northumberland property developer Duncan Davidson, who is selling in order to take advantage of higher land prices and reorganise his finances.

Guide price is £28-30m as a whole or in two farms. “That’s equivalent to £5,000 per arable acre, which is a pretty good deal,” Mr Laing said. The guide does exclude stock and machinery, estimated to add another £2m. “Ideally we’d like a ‘lock, stock and barrel’ sale and there’s enough equipment and staff for even a non-farming investor to come in and do that,” Mr Laing said.