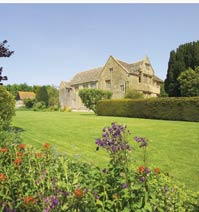 A superb selection of commercial farms and large estates will soon be coming to the market, offering something for every type of buyer.

Manor Farm, near Sherborne, is an unusually large commercial farm in Somerset, with 706 acres of ring-fenced arable and grassland. It features a five-bedroom manor house with a good range of farm buildings, including grain storage and a temperature-controlled potato store. It also has five cottages, which agent David Cross of Savills expected to sell in separate lots.

“This is a nice big farm which will be of interest to a lot of people in this part of the world. But I don’t think a farming purchaser wants six houses,” he said. The land is valued at £4000 to £4500/acre, and the property as a whole is guided at £6.5m.

Savills is also launching a 992-acre estate in Staffordshire, with two principal houses, four cottages, farm buildings, lakes and a commercial shoot. The Knightley Estate, near Newport, has two farms of 425 acres and 436 acres respectively, and a derelict principal house in 68 acres of parkland. It is being marketed jointly with George F White, in up to four lots, with an overall guide of £7.5m.

Further north is the Gwysaney Estate, a 1660-acre sporting and agricultural estate near Chester, which has been in the same family for the past 450 years. “This is the first big estate to come to the market in that part of the world almost in living memory,” said Charlie Evans of agent Strutt & Parker.

Although the estate was for sale in up to six lots, Mr Evans expected it to sell as a whole. “A lot of the estate is let, so I think it will go to somebody wanting a sporting estate and a hobby farm.” Gwysaney includes a magnificent Jacobean mansion with 10 cottages, four let farms, and one in-hand farm, and is guided in excess of £11.75m.

On a more modest scale is Lower Barn Farm, near Dedham, Essex. With 335 acres of irrigated Grade 1 and 2 land, it is ideal for growing high-value vegetable and cereal crops. It comes with a six-bedroom modern house and the potential to contract farm a further 150 acres. It is on the market with Strutt & Parker at £3.3m.