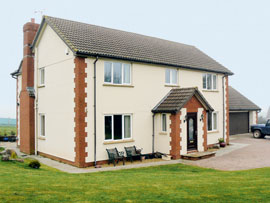 Good commercial farms and land are in great demand in the south west, with grade 3 bare arable land at £7,000-8,000/acre sought both by farmers and investors.

Decent-sized dairy farms are also in short supply, says David Hebditch of Chesterton Humberts, who like many agents is getting daily calls for more arable land.Good commercial farms and land are in great demand in the south west, with grade 3 bare arable land at £7,000-8,000/acre sought both by farmers and investors.

Decent-sized dairy farms are also in short supply, says David Hebditch of Chesterton Humberts, who like many agents is getting daily calls for more arable land.

So his launch of a Devon arable and livestock holding with just under 77ha (190 acres) of mainly grade 2 land at Cheriton Fitzpaine, Crediton, will attract plenty of interest. Dover’s Linhay is a retirement sale with a guide price of £2m.

The four-bedroom farmhouse was built within the past 10 years and is in immaculate condition, while the land is in a ring fence, with a range of livestock and storage buildings.

Additional demand is also being created for farmland in Somerset because construction of the new Hinckley C nuclear power station near Bridgewater is taking land out of production, said Mr Hebditch.

The firm has several small farms coming to the market shortly, including Manor Farm, Knowle St Giles, near Ilminster, which has a Grade 2 listed house, modern and traditional farm buildings with pasture, arable and meadow land. The 42ha (104-acre) farm has been split into six lots, with an overall guide price of £1.71m. (Chesterton Humberts 01823 331234)

Back in Devon, Stags has put a £900,000 guide price on the 50ha (123-acre) Thorne Farm, Stoodleigh, near Tiverton, which it is selling at auction on 1 July. This very private farm has no footpaths and is all pasture except for a small area of woodland.

The main lot includes the four-bedroom Victorian farmhouse for modernisation, 98 acres of land, a barn with potential for extension and a range of traditional farm buildings. A second lot is 25 acres of good land for pasture or arable.

The firm also has Knowle Farm at Poundstock, near Bude, Cornwall, on the market. As well as the five-bedroom farmhouse, there are three letting cottages, three stone and slate barns, a large covered yard and stables. With 75 acres, Knowle Farm has a guide price of £985,000.

Near Tavistock, Hill Farm, at Sydenham Damerel, is hard to fault, says Stags’ Alex Rew. The 103-acre holding is currently all pasture but parts are suitable for arable. Recently re-fenced and regularly re-seeded, Hill Farm is on the market at £1.15m, with a four-bedroom house, stock buildings and handling facilities. (Stags 01392 680059)

Savills has several holdings on the market in Devon and Cornwall, where Penny Dart confirms the demand for arable land.

Planning consent for a temporary dwelling has been given at Village Farm, East Portlemouth in Devon. With 71ha (175 acres) of quality arable and grassland, the holding has estuary views and modern buildings. Two telecoms masts provide additional income and the guide price here is £1.25m.

Another substantial block of Devon arable and grassland with the potential for a new farm holding is at Houghton Farm, Kingsbridge. This is slightly larger, at 81ha (200 acres), with a guide price of £1.2m for productive arable and grassland. (Savills 01392 455 700)