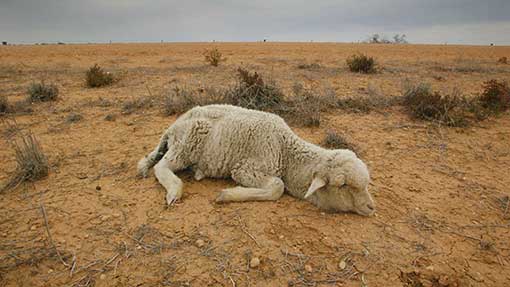 Thousands of sheep have died of self-inflicted head injuries after consuming a poisonous plant in Australia.

The highly addictive Darling Pea plant is spreading across ranches in the aftermath of drought and bush fires.

With a lack of grazing, sheep have begun consuming the variety of wild pea in large quantities. But it contains neurotoxins which cripple the animals’ central nervous systems, driving them mad. Many of the deaths have been caused by sheep hitting their heads repeatedly against posts or rocks.

“They lose weight to start with and then get staggery,” Mr McKinnon told the Sydney Morning Herald newspaper.

“They then get unco-ordinated and depressed, they don’t know where their feet are,” Mr McKinnon added.

According to Mr McKinnon, who works for North West Local Land Services, animals suffer muscle tremors and other symptoms before finally killing themselves by “smashing their heads”.

One local farmer described losing 800 of his flock as distressing. Stephen Knight of Coonabarabran said:

“We lost so many stock, fences, pasture [to the bush fires] – and then for it to come back with a terrible noxious plant like this, it’s awful and very distressing.”