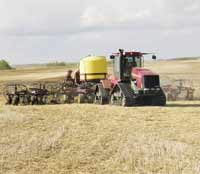 What tractors do Canadian farmers buy? In the fourth of our occasional series focusing on tractor markets in other countries, Scott Garvey from Grainews looks at Canada’s big-hp culture

Overall tractor sales dropped by 5570 units from 2008. Sales of articulated four-wheel drive models, however, remained at almost the same level, with a decline of only 22 machines sold in 2009.

How many combines were sold?

What is the most popular tractor horsepower band?

According to a survey of manufacturers, articulated, four-wheel drive tractors in the 400hp range make up the bulk of orders for field tractors in western Canada.

What are the best-selling tractor brands?

There are no independent statistics on how many tractors of each brand and model are sold each year in Canada. Manufacturers generally will not disclose that information either.

What seeding implements are most common?

Prairie farmers now use air seeders almost exclusively. Most of these drills use a shank-style opener, however, some models are available with disc coulters. Most of the designs currently in use were developed by individual prairie farmers within the past 25 years. Many of them formed their own companies and are now manufacturing their drills an a large scale. Many manufacturers are now offering drills up to 27m (90ft) in width.

What does a litre of tractor diesel cost?

As of March 2010, farm diesel fuel delivered to the farmyard in Saskatchewan was about 75c/litre (49p). In the UK it’s currently 50p/litre.

Is there a red diesel equivalent?

Yes, in most provinces farm diesel (dyed purple) is exempt from road taxes. However, farmers in most regions are also allowed to burn purple diesel in farm-registered trucks, even when used on roadways.

Do farm trailers on the road have to have air brakes?

No. Laws governing road traffic in Canada are enacted by each individual province, so there are some differences. In most cases tractors are exempt from braking regulations. However farmers typically use trucks to transport produce rather than towing trailers with a tractor.

Is there an annual roadworthiness inspection for tractors?

No. Tractors and self-propelled farm machines are exempt from standard vehicle inspection regulations in most provinces. They are also exempt from registration and licensing requirements. However after some high-profile and very serious collisions after dark on rural roads, most areas have now enacted laws mandating specific lighting and reflective markings on farm machinery.

What is the minimum age you can drive a tractor?

There are no regulations governing off-road operation, but most provinces have set a minimum age of 16 years for anyone driving a farm machine on a road. Because farm machinery and tractors aren’t considered standard motor vehicles, driver’s licences usually are not required.

Grainnews magazine (www.grainews.ca) is based in Winnipeg, Manitoba but provides news, business and technical information for farmers right across the mainly arable provinces of Alberta, Saskatchewan and Manitoba.