As much an engineering adventure as the ultimate speed record challenge, the four-year Bloodhound Project, sponsored by fuel additive brand STP, is designed to re-ignite interest in science, technology, engineering and mathematics amongst the youth, and raise the numbers entering technology careers.

Founder sponsor of the Bloodhound Project, STP is no stranger to the land speed record arena, having sponsored US driver Athol Graham, back in 1959, and backed fellow countryman Art Arfons to successive world land speed records in the early ‘60’s at the famous Bonneville Salt Flats, USA.

Just two years ago, this is where a name more familiar to the farming industry, JCB, travelled to take the diesel land speed record. Using technology from its diggers, loaders and high-speed tractors, the Staffs-based company enlisted the help of racing specialists Ricardo and Visioneering to modify its engines and develop the record-breaking car.

The 9m long DieselMax streamliner was driven by the very same man selected for this new challenge, Andy Green, and topped out at an impressive 365.779mph, beating the previous record by nearly 130mph. 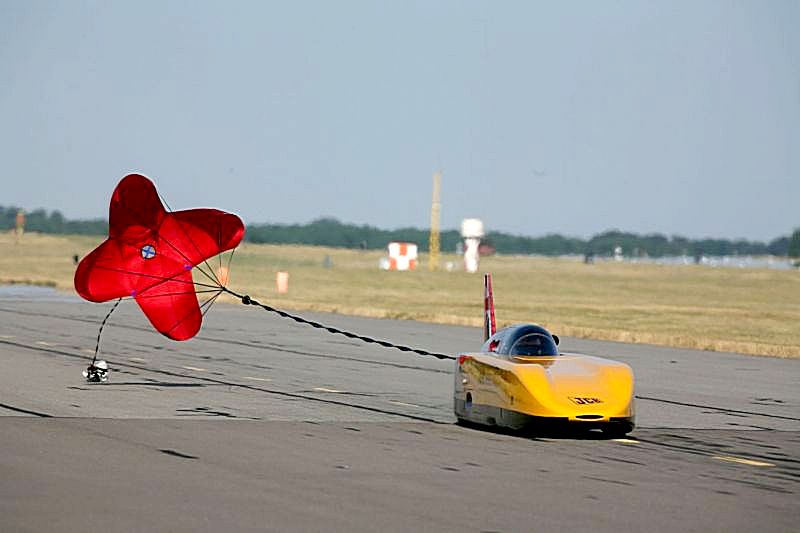 An exotic combination of jet, rocket and piston-engined power is employed in the 12.8m, 6,400kg Bloodhound supersonic car (SSC) in the quest for this new goal.  With former land speed record holder and team boss from 12 years ago Richard Noble OBE again fronting the team, and Andy Green OBE once more in the driving seat, the team has all the credentials to tackle arguably the greatest motor-sporting challenge on earth.

The project, based in Filton, Bristol, will provide the most exciting, compelling and enthralling arena in which to showcase frontier technologies, and for STP, to educate consumers and future users on wider issues of engine efficiency.

Starting with an 800mph bid in 2009, the car will be continuously developed, with a 900mph run in 2010 and the ultimate goal of 1,000mph will be aimed for in 2011. The venue for the record runs is to be confirmed, but Black Rock Desert, Nevada, the scene of Green’s record with Thrust SSC, is one of the considered venues.

Significantly, to fulfil the aim of generating interest and enthusiasm in technology, the unique project has complete public accessibility, unlike other major motorsport arenas. Bloodhound SSC will be developed in the full public gaze at the team HQ in Filton, where visitors will have access to see the car taking shape. Comprehensive and constantly updated websites, from both the Bloodhound Project and STP, will also act as a rich resource for full information as the project unfolds.

On-going information on the Bloodhound SSC project is available www.stp.eu.

Why not have a look at our coverage which includes photos and videos of the record-breaking attempt by JCB by clicking, here.