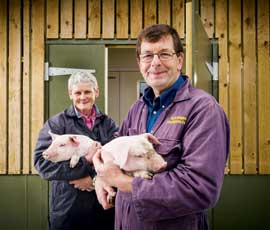 Trailblazing is a word rarely used in farming but it perfectly describes David and Sue Morgan and their family’s pig breeding operation at Pockthorpe, Driffield.

The Morgans and their three daughters share a passion for pig production, for embracing innovation and strong business development, and it was these attributes that marked them out as winners.

The family has been working as a Sainsbury’s concept farm for years, but took on trialling freedom farrowing recently and are learning new practices every day. They have invested well and are big believers in gaining knowledge from others and applying new ideas. The business is now making a healthy profit.

One of David and Sue’s greatest achievements has been to get all three daughters, Vicky, 34, Kate, 30, and Rachel 32, involved and each now has a specific area of responsibility. Like any family dynamic, the Morgans do not agree on everything but have regular meetings to discuss operational issues and agree a positive way forward under David’s leadership.

They started out with no pig breeding experience and just 20ha but quickly got to grips with the basics by learning from others, including extensive investigation of Danish and Swedish pig-breeding systems. An off-site weaning policy has worked well with all their weaners going to third-party straw yard sites on a bed-and-breakfast basis. Individual growers supply the building, straw, water and energy, while the Morgans supply the feed, vet support and labour.

The growers are paid on a per pig reared arrangement and Kate, who manages the contract finishing side, works hard to ensure they are well motivated by providing feedback on figures. She writes a newsletter for all the finishers, organises an annual meeting as a learning experience and even runs an awards scheme to recognise great performance.

The Morgans increased the herd size to 1,700 sows this year when they decided to take the leap into freedom farrowing.

Animal welfare is fundamental to David Morgan and he sees freedom farrowing as key to the future but recognises it does present challenges if you want to remain competitive. One of his biggest projects has been to design an alternative to the traditional farrowing crate pens to provide more space without jeopardising pig safety. David is adamant that freedom farrowing has made them better stockmen because it has forced them all to focus more on small details.

“The Morgans epitomise the very core of the Farmers Weekly Awards. Hard-working and dedicated, they have taken every opportunity to innovate, and have nurtured a unique relationship with the retail sector. They are a great credit to agriculture and an asset to the pig industry”
Dr Zoe Davies, general manager, NPA

With so little land of their own, they rely heavily on local farmers for straw. Efficiency is key and so in 2008 David bought a feed mill to produce his own finisher diets and reduce costs. It is run by two full-time staff and is already proving its worth. Other investments include a wind turbine, solar panels and the purchase of an arable farm nearby. The Morgans are active within the Young NPA, BPEX, producer conferences and write for the local newspaper. Kate has also just started a Nuffield Scholarship on high-welfare production systems.

“Vion is proud to support outstanding achievement in the pig sector as farming excellence has never been more important”
Barry Lock, agricultural director

David and Jill have enthusiastically embraced the eco-pig concept, which carries with it significant environmental challenges. They have achieved outstanding production figures on their 1,700 breeding sow outdoor unit.

James run an intensive, indoor, birth-to-bacon 650-pig unit, delivering excellent results due to performance monitoring and benchmarking. He has seven off-farm finishers and has invested heavily in technology, housing and transport.

Keep up to date with all the news from the 2012 Farmers Weekly Awards.