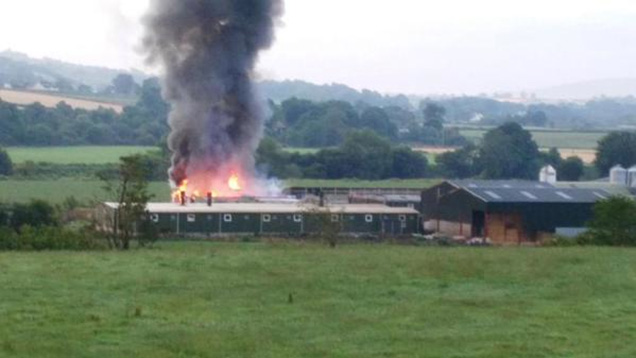 These dramatic pictures show the moment flames tore through a pig farm, killing 32 sows and 400 piglets.

Thirty-five firefighters battled the blaze, which ripped through a pig farm near Strabane, County Tyrone.

Two farm buildings on the farm in Melmount Road were gutted and a number of animals were rescued.

Jimmy Stafford, a DJ at Highland Radio, captured the pictures of the fire at 6.20am and posted them on his Twitter account (@staffordjimmy).

Firefighters remain at the scene of a fire at a shed at Melmont Road, Strabane. A number of livestock have perished. 2 appliances remain.

A spokesman for Northern Ireland Fire and Rescue Service told the BBC: “We had six appliances at the scene.

“This is a very serious incident but crews reacted quickly. There is no idea of the cause at this stage.

“It’s unfortunate and you really feel for the farmer this morning. It’s likely we will be there for another few hours.”

Fire officers are investigating the cause of the fire, which is unknown.