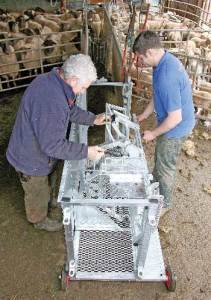 Sheep crushes may all seem relatively similar, but we found big differences in how well they worked when we put five popular makes to the test at the Price home farm in south-east Wales recently.

The models we tested do not represent an exhaustive list, and we threw in a wild card in the form of a Combi Crush to spice things up a bit.

To reveal the merits of individual crushes, we put 20 ewes through each and completed some basic sheep work, from dagging to foot-trimming.

While we acknowledge foot-trimming is no longer advocated by the sheep industry, we couldn’t conduct the test without doing it, and it is still a practice undertaken by many.

The test was by no means scientific and our views are subjective.

However, we did enlist the help of livestock handling specialist Miriam Parker of Livestockwise to give us her expert opinion on how well each piece of equipment performed for sheep welfare and safety.

Here’s how they fared.

(Kindly supplied to us by Monmouthshire Farm Supplies, which sells a range of IAE equipment.) 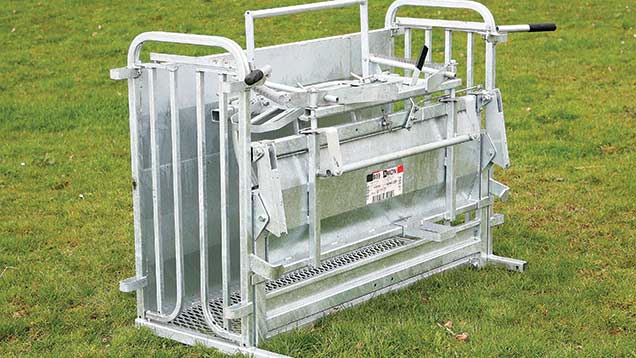 Pros The crush rolls over gently on its axis, so there is no bending in order to operate it.

When a sheep is loaded, all four feet protrude upright from the top of the crush, which means they can be easily accessed for trimming. 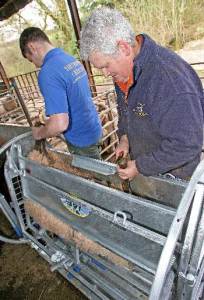 This was definitely the easiest to turn over of all the rollover crushes we tested.

Ewes seemed comfortable inside it, too, and it required little exertion to turn it over when loaded.

The design also enables you to work in a comfortable, upright position.

It held the sheep very securely and 90% of ewes exited first time.

We also liked the fact that the wheels and handles made it easy for one person to move it round the yard.

All four feet protrude from the top of the crush in an upright position and can be easily accessed for trimming.

The crush rolls over gently on an axis, which means you don’t have to bend to operate.

Definitely the easiest to turnover out of all the rollover crushes.

Ewes seemed comfortable inside it and it requires little exertion to turn it over when loaded. It also enables you to work upright.

It held the sheep very securely and 90% of ewes exited first time. The wheels and handles made it easy to move around the yard alone.

Cons It took a bit of time to get used to the three different levers and various adjustments, making operating this unit less intuitive than some of the other crushes, at least initially.

Two big downsides were that sheep slipped on the polished floor and, when turning the crush back over, the ewe’s legs became trapped despite the fact the shoulder adjustment was at the correct height. 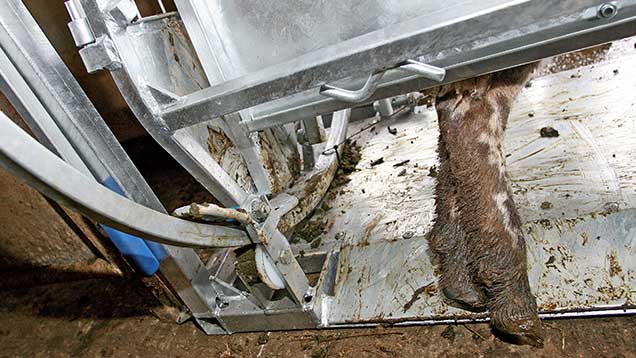 Verdict If you are just looking for a foot-trimming crush, and want one that can be lugged about the yard easily, this is a very good bit of kit. 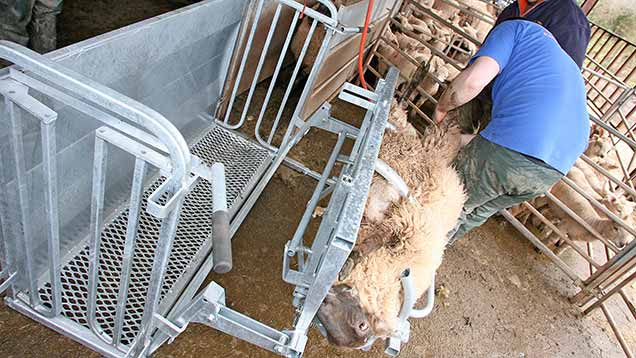 Pros Good clearance from the side of the race provided wide access for tailing. We liked the bifolding gates and you can easily adjust the body bars. 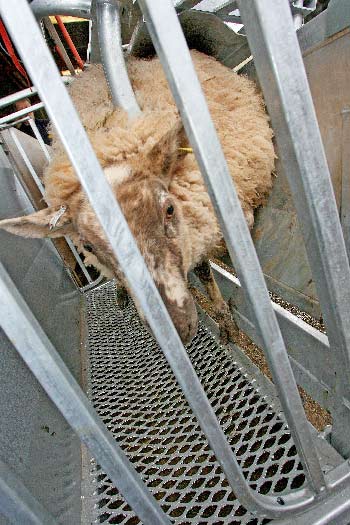 Nearly all the ewes exited first time, but we fear that may have been due less to the design and more to the fact they couldn’t wait to get out.

Cons The rollover bars were too short to support a ewe’s body and we weren’t terribly surprised to note all of them struggled, because the restraint was so inadequate.

The neck bar did little to support the head and the sheep were flailing around during the procedure. One of the ewes slipped all the way back over on to her front.

Having to dodge a few too many kicks to the head, we abandoned the test after ewe number six in case someone got hurt.

Verdict It would be easier, quicker – and probably safer all round – to turn the ewes over by hand. 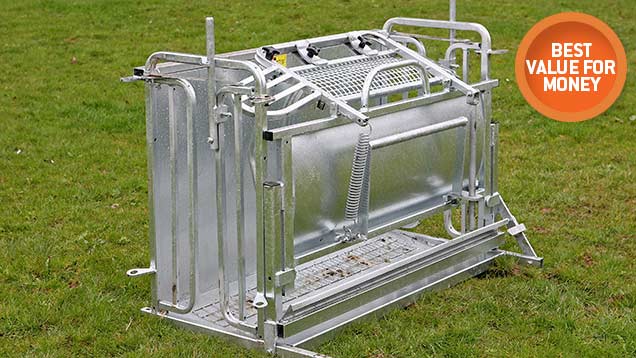 Pros This was the easiest of all the turnover crushes to use.

There were only two levers: simply push your weight down on the bar to lock the cage around the ewe and you release the foot pedal before you pull the sheep over. 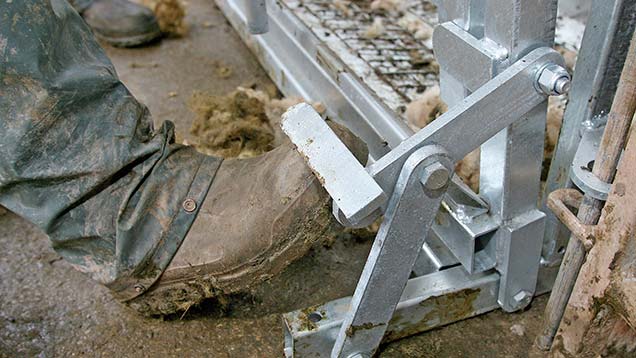 Bifold doors and a solid side meant ewes loaded well because they weren’t distracted by the handler.

The bars were longer than the Ritchie’s, so they reached around the ewe comfortably, preventing her from slipping. They didn’t restrict access to the belly, either. 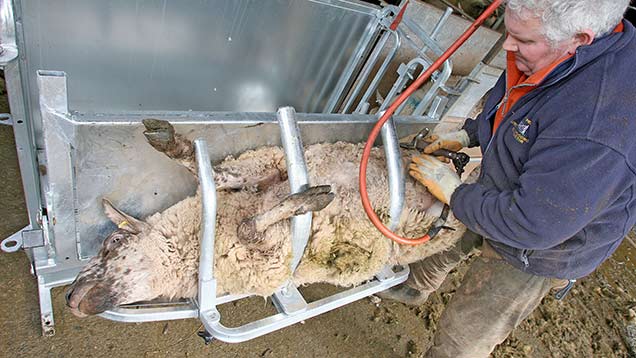 Cons We found it quite difficult to lock the ewes in and had to exert full bodyweight against the side of the crush to get enough force.

This presses the user’s knees on the not-so-conveniently placed release bar, which freed the ewe.

But this can be countered by walking around to the other side to push the bar down.

Verdict Beats the IAE hands-down when it comes to value for money, because it allows you to do more.

The release bar position isn’t ideal, however, this unit is great if you are on a budget. 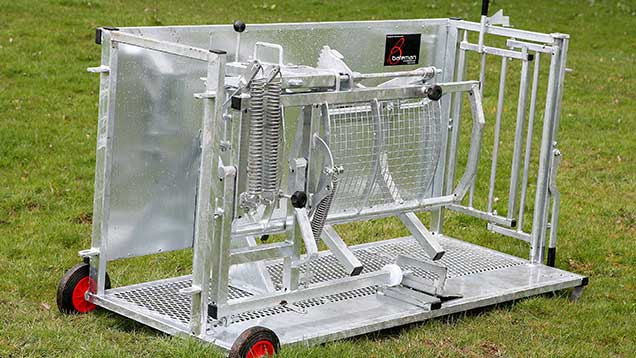 Pros Uniquely, the Bateman has a foot-operated cage that swings out at 45deg, which gave plenty of room for easy dagging. 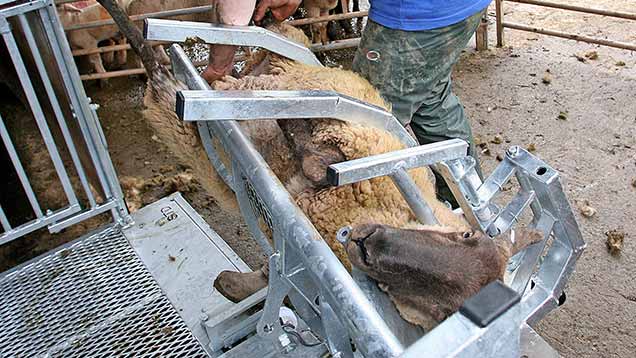 It also has an adjustable bar for longer ewes, so they sit comfortably within the cage and it offers two height adjustments.

Like the IAE crate this one had wheels and handles so it was less trouble to transport around the yard. It held the ewes very securely and was simple to use.

Cons Because the handling side is open, sheep required a little loading assistance and two tried to make their escape through the gap in the side of the crush. 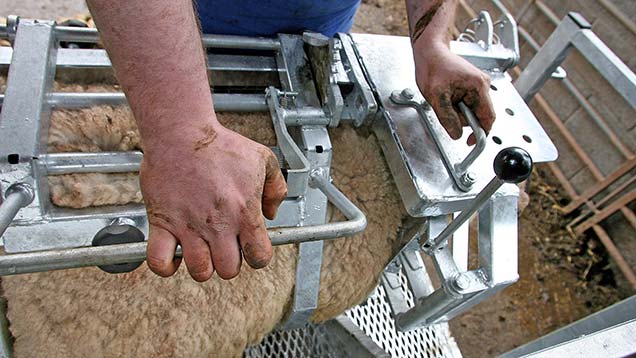 Even when the adjustable bar was pulled across to block this gap, ewes still stuck their head through it.

The self-locking yoke was handy because it put the sheep in the ideal position for turning over. But occasionally it failed to lock and ewes had to be encouraged to put their head back through.

Verdict A good all-rounder and reasonably priced. Worth considering. 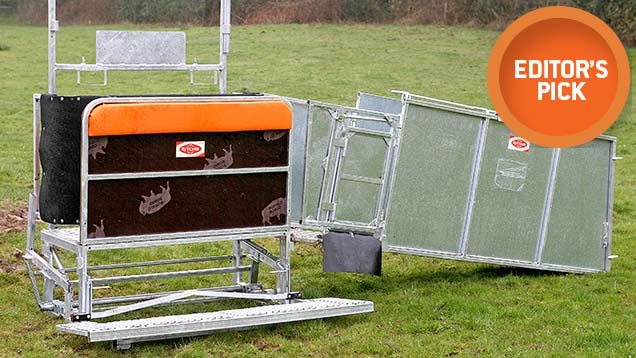 Pros This was an impressive piece of kit – it certainly changed Dad’s first opinion, which is no mean feat.

When it arrived, he thought it looked difficult to use, but it was by far the easiest and quickest out of all the handling systems we tested.

More than half the sheep loaded first time. It allows you to dag upright and requires minimal bending for foot-trimming because the ewe is elevated. 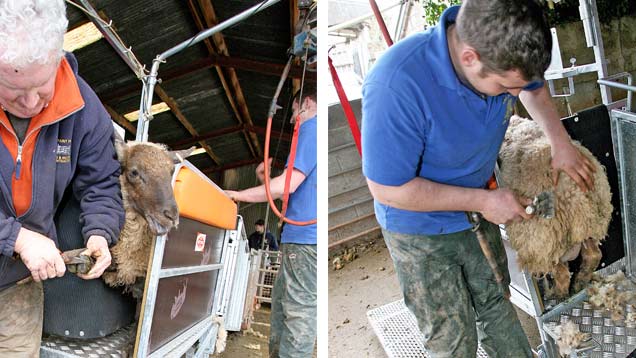 The width of the squeeze can be adjusted if you wanted to put rams or ewes and lambs through it and there is a foot-bar which locks the squeeze in position so you can take your weight off the pedal.

The rubber-matted sides held the ewes very securely and it was the least stressful of all the systems we tested because the sheep remained upright.

Cons We were unable to belly in it, but this is probably the only job it can’t be used for.

Verdict It is very expensive at almost double the price of the other crushes – but you get what you pay for. 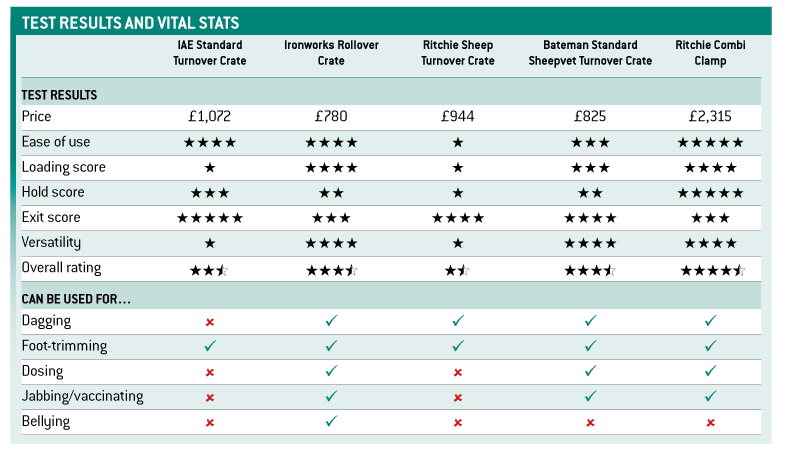 How we scored each crush

Ease of use The apparatus was simple to use and yoke/door and cradle levers worked well.

Loading At least 50% of the sheep loaded first time, without assistance.

Hold At least half of the animals didn’t struggle, allowing work to be completed without stopping.

Exit At least 50% of the sheep exited first time, without assistance.

Versatility At least three of the jobs identified could be carried out safely using the equipment.

Ease of use The apparatus was difficult or complicated to use and yoke/door and cradle levers didn’t work particularly well or were located in awkward positions.

Loading Fewer than 50% of the sheep loaded first time and required assistance.

Hold More than half of the animals had a struggling episode once in the equipment, forcing work to be stopped.

Exit Fewer than 50% of the sheep exited first time, without assistance.

Versatility Only one or two jobs could be carried out safely using the piece of equipment.