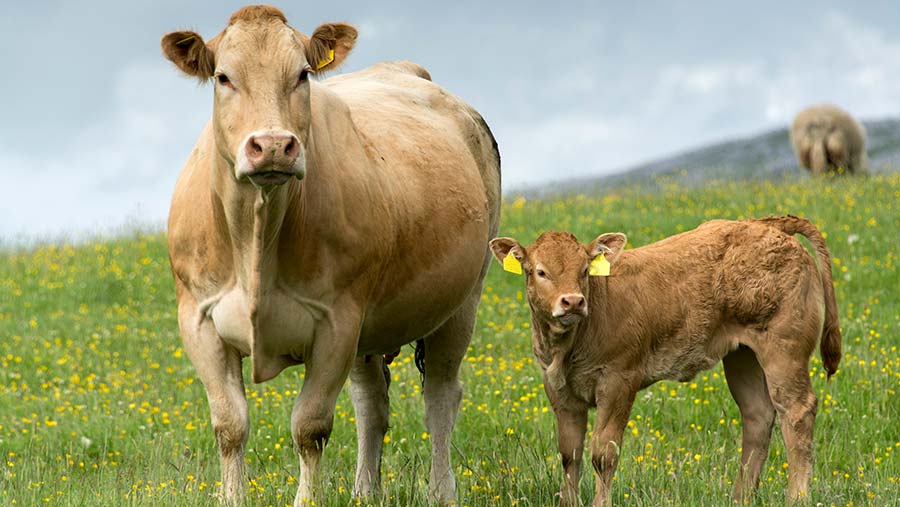 As livestock producers prepare for spring turnout, lungworm control must be made a priority, writes researcher Catherine McLeonard from the University of Liverpool.

Many unanswered questions surrounding staggering lungworm incident increases and the best practices for control led the former practicing veterinarian to pursue a PhD on the epidemiology of lungworm.

Here, she outlines five things farmers need to know prior to turnout from her ongoing research.

See also: How a Welsh dairy farm has managed turnout after heavy rain

Since the mid-1990s, cases of lungworm have increased 10-fold – particularly in Scotland and northern England. The disease is also no longer just a youngstock disease and is becoming more common in adult cattle.

There are two likely causes of this. The first being a change in climate allowing northern farmers to turn cattle out longer – up to two months longer in some cases.

Depending on their lungworm control methods, they may not be protected for the later part of the extended grazing season. We’re also finding vets are becoming more accurate in diagnoses through increased testing.

The overall cost of an incident of lungworm per adult dairy cow is conservatively estimated at £140.

Decreases in milk production – estimated at 4kg a cow a day, takes up 50% of the costs. The other half of costs add up in laboratory fees, treatments, extra inseminations and the disposal of dead animals.

Lungworm can have knock-on effects in cow health and performance, potentially resulting in low fertility, lameness, mastitis and other secondary infections. It can also cause long-lasting production decreases due to severe irreversible lung damage.

Coughing and rapid breathing are often attributed to the first clinical signs of lungworm; however, production decreases are typically the first indicator.

It can be up to a fortnight from the time cows become infected with lungworm to when they begin coughing and breathing heavily.

But often, we see milk production drop almost overnight – serving as the first signal. It’s not common, but sudden death can also occur. Cows who have had it two to three times previously are most at risk to sudden death due to anaphylactic reactions.

Long-lasting anthelmintics, AKA preventative wormers, tend to be administered as a pour-on or bolus to treat the whole herd prior to turnout.

They release pulses of worm control throughout the grazing period, which has the drawback of not giving cattle the parasite exposure they need to build up immunity.

We are finding that long-lasting anthelmintics are the culprits behind immunity issues.

Cattle actually have the ability to build immunity against lungworm, but to do that they must have controlled exposure to lungworm.

Since long-lasting anthelmintics only offer temporary protection against lungworm, they can lead to build up in pastures. Once that protection wears off or naive cattle are exposed to the pastures, producers will be at risk for a huge lungworm outbreak.

While preventative wormers have their place in practice, farmers should use them sparingly on a case-by-case basis and to instead vaccinate a herd for effective long-term control.

Lungworm vaccination contains eradicated lungworm larvae that work their way to an animal’s lungs the same way lungworms would if ingested through grazing.

Because of this, vaccinated cattle may even develop the signature cough temporarily when vaccinated as the larva move towards the lungs. Since the larvae are eradicated, they can’t fully develop which allows the animal to kill it off and develop enough immunity to get them through the year.

Due to vaccination success relying on lungworm exposure, preventative wormers must not be used alongside a vaccination programme.

When incorporating a vaccination programme for youngstock and adult cattle, there are many things that must be kept in consideration, so it is advisable for producers to work with their vets to develop an effective strategy.