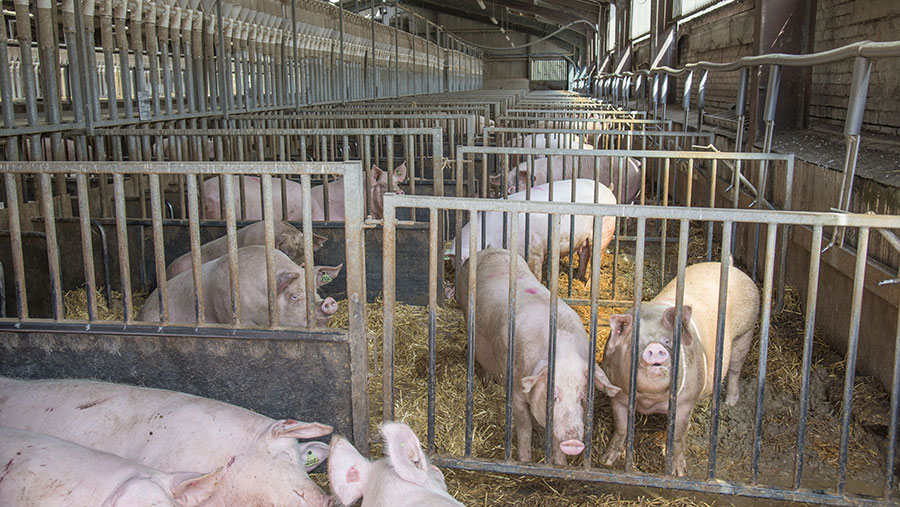 Pig production is energy intensive, but power costs are often overlooked in the drive for greater productivity.

Audits undertaken on pig units in Ireland show a huge variation in energy usage ranging from 18kWh per pig produced to 45kWh.

The high variation from one farm to another suggests a greater emphasis needs to be put on energy efficiency, says Nigel Penlington, head of environment and buildings at AHDB Pork.

Improving the performance of buildings and systems is the first step to cutting energy costs, he points out.

“The main drivers on pig units are health and increasing growth rates, that is where the big money is so, in terms of overall costs, energy is often seen as one of the smaller items.

“But what many are missing is that when small improvements like energy efficiency are fed into the business equation they make a real contribution to the bottom line.”

(*figures based on an electricity tariff of 12p per unit)

This allows the thermal environment to be better regulated and will reduce heat loss.

As well as saving energy, enclosed creeps improve piglet comfort and helps reduce the heating effect of lamps on the sow.

Cooler sows have higher feed intakes and this helps with milk production.

There are different approaches, ranging from fully sealed and insulated boxes to open-sided areas with a cover incorporating a small lip, which helps hold heat, but leaves the piglets visible.

Lighting accounts for one of the greatest inefficiencies in pig systems.

Fluorescent lighting and lower energy lamps can reduce energy costs by up to 80%, but many units still use tungsten bulbs which are cheap but very inefficient – their energy requirement is 2-4kWh a pig produced.

Compact, fluorescent bulbs can be used as a direct replacement for tungsten bulbs. A drawback is they cannot be dimmed, but their energy requirements are much lower at 0.4-0.8 kWh a pig.

Fluorescent strip lighting has the same energy requirement so switching from tungsten can generate good savings.

The introduction of LED lamps has offered opportunities to match light levels and colours to an animal’s needs and save greater amounts of energy than fluorescents.

The capital costs are high, but they offer energy savings of 80-90% over conventional lighting as well as potential health and productivity benefits.

Tungsten lighting will typically use 4kWh a pig produced but fitting fluorescent strip lighting can reduce this to 0.8 kWh.

High-efficiency motors cost no more than standard motors and should be considered when specifying or upgrading motors on feed or waste handling systems.

With wet feeding and slurry pumping systems, select pumps that give the best flow/energy characteristics.

Fitting variable speed pumps to wet feed equipment, which don’t undergo uniform use or demand, can save at least 30% in costs.

Pumps which are used to service a variable demand should be linked to variable speed drives. These drives enable the output speed of the pumps to match the volumes and pressures required at different times of the operational cycle.

It is important, particularly during periods of cold weather, to retain the heat produced by the pigs within the building to warm the cooler air coming in from outside.

If a lot of heat is lost through the walls of the building, additional supplementary heat will be required and this will increase costs.

Insulation can be damaged by pests so check for holes and other damage.

Poor insulation accounts for a 9kWh per pig produced energy requirement on a typical pig unit compared with a well-insulated building at 3kWh.

The benefits of good insulation are largely lost unless the ventilation rate is accurately controlled.

Ventilation systems are intended to provide optimum living conditions for pigs so care is needed when changing minimum ventilation settings in rooms housing pigs that are smaller than those rooms were designed for because it could result in fans running at slow and inefficient speeds.

A consequence of this may be poor airflow and inadequate ventilation – just because a fan is turning it does not mean it is pulling air through.

Consider replacing old or inefficient fans. A single fan in a typical finishing building will consume its own value in energy in about 18 months so spending 10% more on a fan capable of securing a 10% energy saving will pay for itself in about the same period.

Fans need to be clean to work correctly.

A build-up of dust and debris on the fan blades and in the chimneys can decrease their efficiency by 20% or more. Most modern fans and fan shafts can be cleaned with gentle power washing but check with the equipment supplier to confirm if this can be done and how much pressure can be applied.

Outlet fans can be made up to 15% more efficient by adding cones.