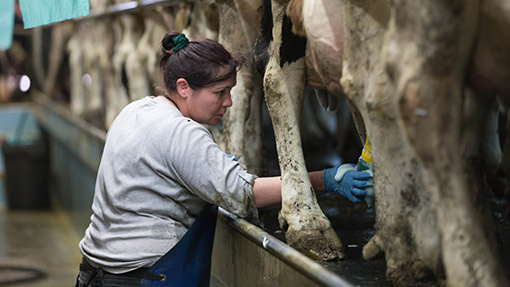 Ensuring all teats are covered by disinfectant at every milking is one of several measures critical to the successful control of mastitis, according to one US expert.

Mastitis is a huge drain on the global dairy industry and in the UK, the average cost is estimated at about £200-300 a case.

Pamela Ruegg from the University of Wisconsin believes successful control can only be achieved through the cumulative effect of consistently implementing a number of management practices.

Speaking exclusively to Farmers Weekly while on a Genus-orgainsed trip to the UK, she outlines her nine top mastitis facts to help farmers successfully get on top of the disease.

1 One to two minutes is the target lag time between initial teat stimulation and cluster attachment when milking.

2 Less than five minutes is the target total unit attachment time at milking.

3 Pre-dipping teats with a disinfectant can reduce bacterial loading on the teats five-fold.

4 Stripping before milking is crucial because half of clinical mastitis cases only present with abnormal milk.

7 Farms that regularly train staff in all aspects of mastitis control have a lower rate of clinical mastitis and faster milking speeds.

8 US farms that train staff frequently average six cases of mastitis for every 100 cows a month compared with nearly 10 cases on farms that never train. (Research by Wisconsin University)

9 US farms that don’t have a complete milking routing average 10 cases of mastitis for every 100 cows monthly – twice that of farms with a routine. (Research by Wisconsin University)