Not only is the weather changing, with warmer, wetter summers and milder winters, but the focus on mixed farming, longer grazing seasons and agri-environment schemes also add to the risk of fluke.

Combine this with the challenge of increasing drug resistance and the huge cost of infection and it is clear why sustainable fluke management needs to become more of a priority on farms.

Faciolosis is the disease caused by liver fluke infestation. It occurs when the liver fluke parasite, Fasciola hepatica, infects the liver of the sheep.

The immature parasites migrate into the liver after they are ingested when grazing, causing damage to the structure and can lead to chronic disease and death.

Disease can also caused by adult flukes, which live in the bile duct before they are excreted.

It has a huge financial impact on farms through losses and abattoir condemnations.

The lifecycle of fluke in sheep 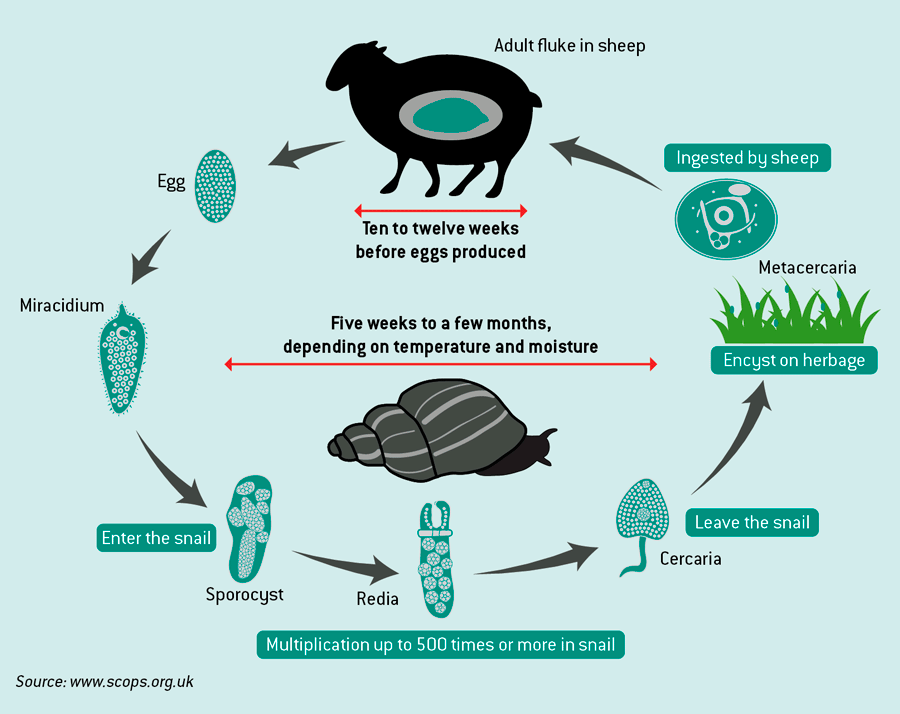 There are three main clinical forms of liver fluke disease:

Which form the sheep is infected by depends on the numbers of the parasite injested, the period of time they are injested for and the time of year.

All forms are serious, but sudden death is most often seen in animals with the acute form of the disease.

A fluke infection can be diagnosed in various different ways while an animal is alive and dead.

There are invasive and non-invasive tests:

Warm and wet weather is particularly conducive to fluke risk and parasite survival because the vectors, snails, rapidly multiply and are infected by the larvae.

There are several options to try and reduce the risk of sheep or cattle consuming the parasite cysts which stick to vegetation:

Triclabendazole (TCBZ) is the most widely used flukicide because it works on immature fluke. Like many widely-used treatments, it has led to the development of resistance in several countries. While this is not confirmed in the UK, there have been reports of suspected resistance.

Failure of TCBZ treatment may be due to other factors, such as re-infection or inaccurate dosing

For more on liver fluke, including tackling resistance, fluke quarantine and treatment see the Scops website.

To prevent the development of resistance, rotational use of TCBZ, closantel or nitroxynil should be considered where flukicides are used strategically.

Opportunities to avoid the use of TCBZ should be exploited whenever alternate drugs will give satisfactory levels of control. For example, the use of closantel or nitroxynil three-weeks post-housing, and/or treatment of chronic infections in the spring with an adulticide.* 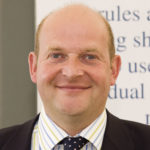 Five years on from fluke disaster

Sheep farmer George Milne says he learned the hard way the importance of staying on top of fluke through faecal sampling when he experienced an outbreak in the winter of 2012-13.

Fluke had not previously been an issue on his farm near Fife, on the east coast of Scotland – it was predominantly more of a problem to the west of him.

However, when buying in some fattening ewes, he got more than he bargained for, with a strain of triclabendazole-resistant fluke.

“It was a bad fluke year right across the country. We had losses and it wasn’t very pleasant,” says Mr Milne who has 250 breeding ewes and fortunately, thanks to the changes made, has experienced no losses to fluke since.

On realising that triclabendazole-based products weren’t working, Mr Milne says the first step was to find a product to “knock it on the head and then get the sheep into recovery mode”.

Reducing contamination became very important in the following year, so high-risk fields were not grazed and were cut instead, for hay or silage and only cleaner pastures were grazed.

Mr Milne is sure this helped to break the cycle of the fluke and then turned his attention to the most significant change – faecal sampling.

“What we are trying to do is keep very much on top of it,” he explains.

“We test mob dung to get it at early stages so fluke doesn’t build up on the farm.”

His strict approach sees samples tested, prior to any dosing, three or four times over winter.

Samples are sent to Scotland’s Rural College for testing and Mr Milne won’t treat for fluke unless results suggest they need to.

High-risk fields are now grazed, but Mr Milne tends to concentrate on these when taking samples.

“I try to use best practise on a practical basis. I know recommendations are to avoid particularly boggy and wet areas, but the reality here is, when you’re on the ground here in a wet year, everywhere is wet,” he says.

“I try and not overgraze, I try and keep sheep moving round, which helps with fluke and worms.”

Equally important, he believes, is the follow up test to see if the product has worked or whether resistance is present. He now primarily uses closantel-based treatments, but is careful to vary products to reduce selection pressure for resistance.

Given that the resistant fluke was brought on to the farm, it is no surprise that George is now “very careful” when it comes to quarantine. All purchased animals go into quarantine areas and fields, and are tested and treated before they join the flock.

While George has not seen any fluke flair ups since the awful winter five years ago, he knows he has to constantly be aware and test for it rather than become complacent.

He is clear that no farm is the same and both prevention best practise and suitable products will vary from farm to farm, but stresses that sampling is the key to staying on top of fluke and checking products you use have an effect.