The premium price of goat milk is well known. However, a Lancashire couple are rapidly proving that similar results are achievable with goat meat too.

Young goats slaughtered for meat from 12 weeks old and retailing at more than £6.50/kg are supplying a rapidly expanding nationwide business, developed from scratch by Chris and Sharon Peacock.

Based on the strikingly marked red and white Boer breed that was developed in South Africa purely for its carcass quality, Mr and Mrs Peacock have established a herd of about 250 goats on their holding at Cockerham, Lancaster.

Having fortuitously acquired the web address “goatmeat.co.uk” several years ago, they now find themselves with a long waiting list of customers who are paying £80 for a 12kg pack of goat meat – a whole carcass.

They have built their own web-site and any goat meat lover typing “goat meat” into an internet search is immediately directed to the Peacock’s site.

There are currently 80 breeding females in the herd – with expectations to increase to 100 – producing a 180% kidding.

Ideally, young kids stay on their dams until slaughter at 12-16 weeks old. A typical 16-week-old kid weighs 32kg and kills out at just under 50%.

All meat produced by the Peacocks is sent fresh for next-day delivery, but customers – predominantly non-ethnic – were busily placing Christmas orders in mid-summer.

“It’s young, flavoursome, succulent and tender and is definitely not the type of goat meat you have to turn into curry. Meat produced by the Boer is marbled and has a mild taste,” says Mrs Peacock.

When the Boer was first introduced into the UK more than 20 years ago there was some concern over its ease of kidding. And, although purebreds do not have a reputation for kidding difficulties, anyone using a Boer buck on dairy-breed females needs to be aware of the differences in conformation.

The does – Boer goats are referred to as does and bucks – produce kids in spring after 153 days’ gestation. The Peacocks’ herd is kept outside all year round, although it’s essential shelter is provided.

“Goats aren’t like sheep and have no natural waterproofing. We provide pig-arks and field shelters during summer and the herd is housed during the night in winter. Does are brought inside at kidding,” says Mr Peacock.

Goats do have significant management differences compared to sheep. The Peacocks have learned that, as browsing animals, goats need more than lush summer grazing.

“We’ve got loads of thick, green meadows after all the rain this summer, but we’ve still had to feed some hay to add roughage to the diet. Goats aren’t easier than sheep they are a different type of animal to manage.”

Foot-care is even more critical with goats, say the Peacocks. They cannot be “turned” like sheep for foot-paring, which may need undertaking three times during pregnancy.

Supplementary feeding is based on cattle pellets – usually pre-mating and after kidding. The Peacocks say goats have a high mineral requirement and require more regular worming than sheep losses will occur when copper supplementation is not closely monitored.

Demand for Boer goat breeding stock is outstripping supply with the best females making up to £600. The Peacocks admit that finding numbers of good, purebred Boer females isn’t easy as interest in the goat meat market continues to develop.

There are currently about 50 Boer goat breeders in the UK although only a handful are focusing on commercial meat production. 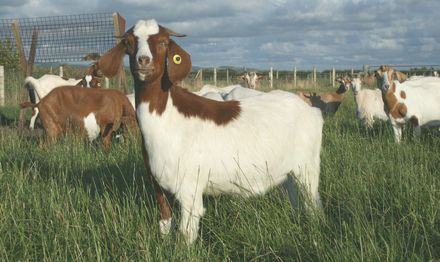 Managing goats’ diets means ensuring there is more than just lush grass in front of them to satisfy their browsing nature.