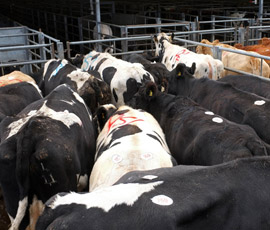 Campaigners fighting to save a 150-year-old livestock market have lost their legal battle to halt plans to build a supermarket on the site.

A High Court judge today dismissed reviews lodged by campaigners trying to prevent Abergavenny cattle market from being relocated outside of the town centre ten miles away.

The campaign group Keep Abergavenny Livestock Market (KALM) had been fighting for the past two years to stop the site being demolished to pave the way for a £11m Morrisons superstore and library.

The judicial review challenged Monmouthshire County Council’s decision to grant planning permission, arguing the closure of the market would impact heavily on the local economy and demolition threatened pollution of the River Usk.

But Mrs Justice Nicola Davies said the council had taken all socio-economic and environmental matters into account when reaching its decision and ruled there were “no grounds” on which planning permission could be challenged.

“No evidence has been adduced to identify any real risk to the River Usk as a result of the proposed remedial measures”, she said.

She said: “I value the market in town and I value the part it plays in the economic prosperity and life of the town.

“I value the market in town and I value the part it plays in the economic prosperity and life of the town.”
KALM supporter Sue Pritchard

“Farmers have never been given a choice about the future of the market in the town. The council presented them with an ultimatum, telling them the market couldn’t be brought up to 21st century standards and would have to close.”

She said a report commissioned by Abergavenny Civic Society showed the market could be retained in the town centre, with additional facilities for local food producers, at half the cost of the proposed out-of-town site.

“But the council won’t even discuss this and are instead spending £6m on a new market in the middle of nowhere, with no facilities or services for farmers.”

But John Young, a dairy farmer from Abergavenny, welcomed the decision.

“I think the market has got to move out of Abergavenny, because it is not very convenient for a modern day market to be right in the town centre.

“It is absolute chaos on market day trying to in and out and unload stock and it couldn’t go on that way.”

Mr Young said the market is in desperate need of capital investment to update its facilities and the move would provide this.

Work is expected to begin on a new site near Raglan next week.