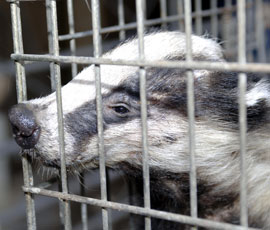 The six-week pilot cull is expected to begin shortly in the two pilots areas, west Gloucestershire and west Somerset.

It is understood that cull experts will soon begin placing attractive food baits, such as peanuts, near active badger setts.

However, activists from the Stop the Cull lobby group, who are planning direct action against the cull, have issued advice to its supporters about how to destroy the traps.

In a statement on its website, the group urges its supporters to pour male urine on food baits to act as a deterrent for badgers.

The statement says: “As many of you are probably aware, the bait points may well soon start appearing near the badger setts.

“The best thing to pour over a bait point is male urine. This has been told to us by badger experts and scientists.”

However, Stop the Cull female activists outnumber their male counterparts by 2:1, so they are asking its male members to help provide supplies.

“If you are a man and you can help out, make sure the container has a very good screw lid and is washed down (use a funnel) and then put it in a bag. The fizzy drinks bottles are ideal,” the statement adds.

“When you get to the bait point pour a little bit on top and then do a nice big circle around it.”

Last week, it emerged that the same activists were planning to set up protest camps in and around the culling areas, similar to the infamous A34 Newbury bypass camps in Berkshire, set up to oppose construction of the road in the 1990s.

On Friday (5 October) Natural England issued a provisional licence for west Somerset to cull badgers to prevent the spread of bovine tuberculosis.

An NFU spokesman said the union was “confident” that culling would begin in both designated areas this autumn.

A DEFRA spokesman said: “The badger cull will be carried out by highly trained marksmen acting entirely within the law and they are entitled to carry out those activities without intimidation or interference.

“Any attempts by protestors to inhibit the cull are totally unacceptable and risk increasing the spread of bovine TB and undermining efforts to eradicate this terrible disease.

“Nobody wants to cull badgers, but no country in the world where wildlife carries TB has eradicated the disease in cattle without tackling it in wildlife too.”