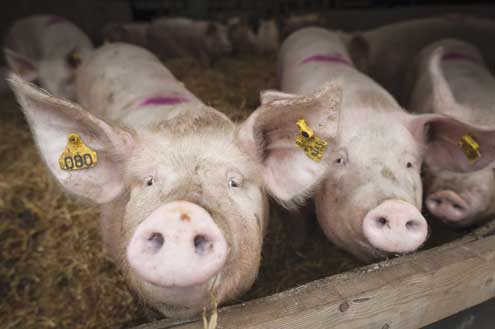 Pig producers are being urged to review their worming policies as the latest figures suggest infestation remains a problem, despite an initiative to reduce the worm burden in the national herd.

According to feedback from abattoirs involved in the British Pig Health Scheme, 3.5% of pigs slaughtered are infected with endoparasites.

This does represent a 1.5% fall since the scheme started in 2005, but pig adviser Mark Hawe says the level remains unacceptably high.

“No level of worm burden is acceptable. Worms can be controlled if farmers have the determination and knowledge to do something about it,” he says.

But farmers must not regard worms as a problem solely for abattoirs, where damaged livers are condemned. “If the processing industry isn’t making as much money as it could be, farmers won’t be either.”

Dr Hawe, an adviser with the Department of Agriculture in Northern Ireland, is confident farmers can get on top of the problem by regularly monitoring and reviewing their worming policy.

A worm burden can reduce daily liveweight gain by 10%, while the feed conversion efficiency can be cut by up to 15%.

Vet Derek Armstrong, who heads the research and development team at BPEX, says these losses can add 10p/kg to production costs.

A major problem with worm infestation is the difficulty in spotting symptoms. “With moderate levels of infestation farmers will notice growth rates are lower than normal, but it might not be obvious,” says Mr Armstrong.

An annual programme of worming should be a routine job on farms with a record of worm problems, he adds.

Worms to look out for

The most virulent of the worm parasites is Ascaris suum, a white roundworm that has the capacity to lay hundreds of thousands of eggs in a single day.

For growing pigs exposed to Ascaris, worming two or three times during the growing stages may be necessary to avoid a build-up of infestation.

“Ascaris suum eggs can persist for seven years in the environment, so the emphasis should be on preventing the female worms laying eggs,” says Mr Armstrong.

The presence of liver milk spots indicates pigs have been infected, probably from being in contact with contaminated faeces. However, medication alone is ineffective in eradicating worms from a herd, says Dr Hawe.

“The aim should be to beat infection over time with an effective medication policy combined with stringent hygiene measures.

“Medication is needed to take out all stages in the worm’s lifecycle. It is not good enough to medicate an animal and leave it, you have to make sure it is not re-infected through being placed in a contaminated pen.”

“Even when animals have been medicated to kill the adult worms, larvae could still be present in the body, or eggs present in their faeces. It is therefore essential faeces aren’t carried from one unit to another on footwear.”

An effective method of reducing the possibility of re-infection is an “all-in, all-out” policy, an approach favoured by Dr Hawe.

“We are seeing more so-called bed-and-breakfast finishing systems, similar to those in place in the broiler industry, where growing pigs are taken to slaughterweight on a unit separate from the breeding herd. This finishing unit is thoroughly cleaned and disinfected before a new batch of pigs is introduced.”

He urged producers to draw up worm eradication policies in conjunction with their vets. “Farmers need to look at worm levels in their pig carcasses on a regular basis and, where necessary, take immediate action.”