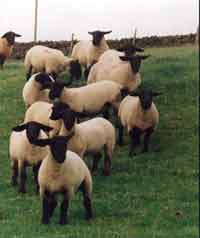 Welsh Sheep 2009 will be staged at Cernioge Bach, Pentrefoelas, Clwyd, on Tuesday 19 May. More than 170 trade stand pitches have been booked, including 45 allocated to breed societies.

But commercial exhibitors will have to compete for visitor interest with tours of the host farm, which is widely regarded as one of the best managed hill units in Wales.

Eifion Ellis, who with his wife, Ann, has rented the farm from the Foelas Estate since 1986, is in the process of handing over the tenancy to his son, Dewi.

They run 1150 pedigree Lleyn ewes and 100 Stabiliser cows, which were introduced in 2001 to replace Saler crosses. “The aim is to keep things as simple as possible,” says Dewi Ellis. “We try to reduce the amount of feed carried to the ewes by lambing towards the end of April so lambs grow with the grass. “We have a lambing percentage of 180-185%, and we rarely have to put a hand inside a ewe.

“We do not push lambs during summer, but finish them on tack in Cheshire before selling them in late winter or early spring.

“The purebred lambs, which all go through three local auctions, weigh an average 40kg at sale.” 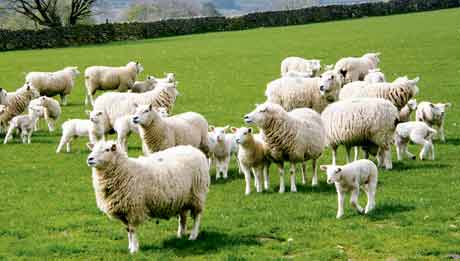 But visitors will hear that the system is under review. Mr Ellis and other members of the North Wales Lleyn Sheep Breeders Club are experimenting with different terminal sires. “While the qualities of Lleyn ewes have been well publicised, I feel that her cross-breeding potential has not been demonstrated in the past.”

In readiness for the event the family put 120 ewes to Hampshire and Meatlinc rams and 250 to Texel tups. Other Club members used Beltex, Blue Texel, Charmoise, Charollais and Suffolk rams.

The resulting crossbred lambs will be penned on the day. A few sets of abattoir grading results should also be available at the event, and on Lleyn Society stands at summer shows.

Breeders hope the trial will show that the Lleyn is ideal for sheep farmers who are considering switching to easier-care systems.

“We want to show prime lamb producers what the breed can do when put to a range of sires,” says Mr Ellis, who was recently appointed to the breed society’s judging panel.

Culling is tough within the Cernioge Bach flock and any females the partners feel are in any way inferior are not sold for breeding.

With so many sheep run under difficult conditions, Dewi Ellis is concerned about the introduction of EID. Having trialled a tag system with cattle, he is acutely aware of the problem of lost tags, unreliable readers and difficulties downloading data to a computer.

Farmers attending the event will have the chance to talk to equipment manufacturers, and to visit a neighbouring farm where EID is used to monitor the CAMDA Welsh Mountain sheep improvement scheme.

NSA North Sheep will be hosted this year by the Stott family, whose Laund Farm, Chipping, Preston, is a Lancashire hill unit where a traditional sheep enterprise is complemented by a diversification business featuring milk sheep.

The Stott family, John and Christine, and their son Simon and his wife Rachel, believe their farming business is well positioned for the future.

Not only do they implement a successful traditional hill farming strategy, producing quality Mule gimmer lambs, but also a modern milk sheep enterprise, supplying a growing, health-conscious market. “We’re a sheep farming family through and through,” says John Stott.

The Stotts farm 202ha (500 acres), all of which is in the LFA. Their traditional sheep enterprise comprises flocks of 500 Swaledale ewes, 120 Beulah ewes and 50 pedigree Bluefaced Leicesters, plus a 400-ewe Friesland flock, 30 crossbred suckler cows and 20 pedigree Simmental cows are also kept.

It was John’s father, the late John Stott, who pioneered the Bluefaced Leicester in Lancashire over 50 years ago and started breeding what was soon to become the indomitable Mule.

“The Mule is the most outstanding damline available. She is easy to care for and has potential to produce more saleable lambs a ewe finished off grass than any other breed,” says Mr Stott.

But it’s the Bluefaced Leicester flock which takes pride of place at Laund Farm. “We’re always seeking to improve conformation and are pleased with progeny by recently introduced Hewgill and Neusclough bloodlines. We sell at the society sales up and down the country and aim to be within the day’s top half of average prices.” 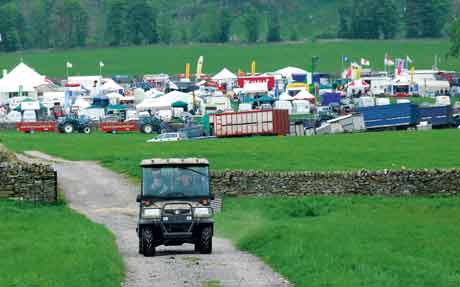 With a full range of seminars and practical demonstrations, there will be plenty for visitors to see and do

Back in the late 1990s, the Stotts decided to diversify and introduce a complementary milk sheep enterprise, which now supplies the other half of their income.

“Simon had committed to joining the business, but we agreed we needed regular income to supplement our annual harvest from breeding stock sales.

At the time, a local milk sheep enterprise was searching for more milk in an attempt to build economies of scale, in what was then a relatively new sector, says Simon Stott. “Milking sheep appealed to us; start-up costs for a 100-sheep unit were relatively small compared with a dairy cow unit, so we began a lot of homework.

“We talked to other milk-sheep producers, travelled to Holland to look at parlours, carefully researched the market and called numerous dairies. We found sheep milk and its certain health properties was stimulating a fast-growing consumer demand.”

The Stotts initially invested in 100 pure Friesland sheep and within four years grew the enterprise to 400 head, yielding an average 650 litres per 10.5-month lactation.

Milk is sold to a number of dairies, taking up to 8000 litres a week, with 95% processed mainly into cheese. Branded product, including Parlick Fell cheese, can be found on selected supermarket shelves throughout the country.

The Stotts say they have reached equilibrium as far as their Friesland flock’s scale of operations is concerned, simply because it is relatively labour intensive. Both daily milkings involve two people and take five hours in total through a 12 x 24 herringbone parlour. All ewes are milk recorded, they’re put to progeny tested rams and the flock is split-lambed to ensure a 12-month milk supply.

Frieslands are prolific, with an average 2.5 lambs reared. Of the ewe lambs bred from the highest performing ewes with good udder attachment, 25% are selected as replacements, while the rest, including the wethers, are finished from 14 weeks and 42kg liveweight and sold to either through local auction marts or deadweight.

North Alfordon is a 202ha (500-acre) predominantly grassland unit on the northern slopes of Dartmoor, rising to 1000ft above sea level. It carries 1200 ewes as well as 200 suckler cows. The sheep enterprise consists of a flock of 500 homebred Scottish Blackfaces and 700 North Country Mule ewes, which are crossed with Suffolk and Texel sires to produce finished lamb. They are now being sold in increasing numbers through their farm shop, Farmer Luxtons.

The shop, on the outskirts of Okehampton, was recently officially opened by Beijing Olympic silver medallist Heather Fell. Direct selling is the latest venture on this progressive livestock unit to bring in extra income by adding value and it enables the whole family to play a part in its success to date, with son Stuart taking the lead role. 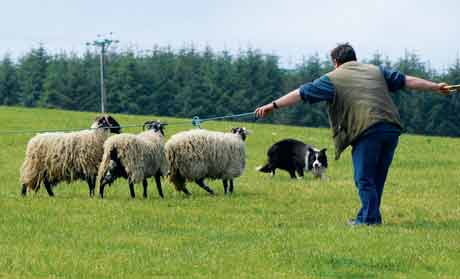 A sale of working sheepdogs will be one of a number of attractions for visitors to this year’s Sheep South West at Dudley and Stuart Luxton’s North Alfordon Farm, Okehampton

The site is central to the region within easy reach of all the south-west’s main sheep areas and its proximity to the A30 trunk road gives it good national access.

Visitors will also have the chance to attend an open question forum, where they can put their questions on all aspects of the sheep farming to leading industry figures, including NSA representatives.

There will also be an EID forum which will allow farmers to put forward their views on the current consultation to ensure farmers views are sent back to DEFRA.

Young shepherds will also be able to enter the Shepherd of the Future competition, which will test their skills in lamb selection, ATV handling and shearing and their knowledge of flock management and health topics. The winners will receive a share of a £1000 prize fund.

Anyone needing a new sheepdog will be able to find one at Sheep South West, too, with a selection of dogs offered for sale on the day. Other demonstations include shearing on the Horner Shearing and George Mudge stands and a Combi Clamp demonstration on the David Ritchie stand.