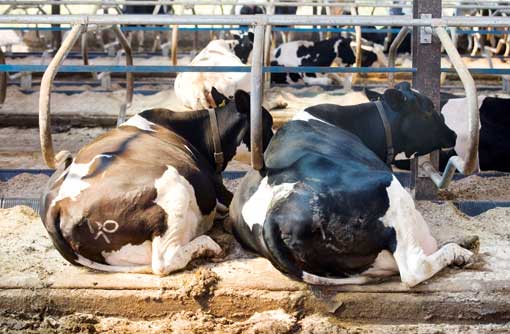 Straw shortages may have forced farmers to look for alternative sources of bedding this year. Matthew Sharp looks at some of the alternatives available.

High straw prices, the result of a straw shortage this year, have left livestock producers looking to alternative sources of bedding this coming winter.

A dry spring left crops thin, and with very little to carry over from last year, straw is in great demand, says Robert Sullivan, Farm Consultant at Strutt and Parker. “There has been some exceptions but straw yield, on average, has been down.”

With straw prices so high, livestock farmers and specifically dairy farmers, are looking to ways in which they can reduce cost.

Sawdust is one material producers are using to avoid costly straw, especially when mattresses are installed in cubicles. With only a light covering needed on mats, sawdust can prove cost-effective and efficient in the dairy herd.

A 50% sawdust and 50% lime ash works, according to Northumberland dairy farmer Dennis Gibb.

Sawdust does have to be stored in a dry, clean space which could prove problematic for some farmers requiring vast quantities.

Sand is also another popular option despite some concerns about the effect it has on slurry systems – especially wear on the pump. But with new technology available, removing sand from slurry is proving much easier.

“It needs to be deep and wouldn’t work on the mattresses we currently use, but if we were to consider building new cubicles, I would definitely consider sand,” Mr Gibb says.

“Not only is it good for bedding but it often prevents cows slipping when it is pushed back.”

Reducing the need for lime and enhancing slurry nutrients is a major attraction to gypsum for some dairy producers.

Gypsum is a highly absorbent material but is not suited to deep bedding, says Peter Shipton of Kingshay.

Anna Mcpherson, who milks 150 Holsteins, has used gypsum before but encountered problems with it solidifying and getting stuck in slats.

“Despite this, some farmers choose to mix it with chopped straw or sawdust which could help reduced the problems of it solidifying,” she adds.

But, gypsum does have a place on many dairy farms, especially when used as a blend alongside sawdust.

Paper-based bedding is proving to be an attractive option to farmers, not only as bedding, but also as a soil conditioner.

Some paper-based bedding has a pH of 7.4 meaning it is neutral, according to Envirobed operations manager Amor Seth.

“Not only does it mean cell counts and mastitis are reduced but it also means once its used, it can be spread back on to the land acting as a lime therefore reducing a farmers ever-increasing input costs”.

With a 95% dry matter and high absorbency, once cows have mucked or urinated on an area, it is absorbed into the bottom of the bed meaning cows use the same area again – unlike straw or sawdust,” Mr Seth adds.

Using straw can still be an option for farmers but poor quality straw can leave significant health problems within a herd.

More pressures on straw for organic matter in the soil as a way of reducing fertiliser costs mean alternatives may become something which more farmers should consider when looking at dairy profitability and management.