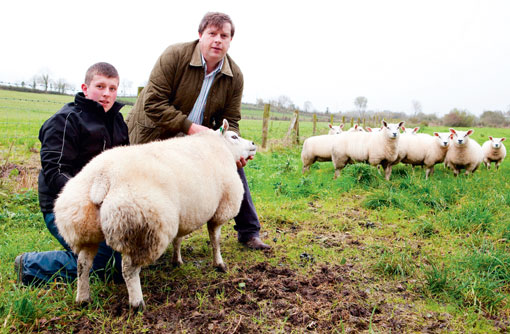 With the lifting of the slurry ban on the 31 January, we were able to relieve all tanks in the short window of two days of frost on 2 and 3 February. It was hard to beat the great country smell that weekend when coming out of church.

Matthew has finished lambing his Beltex ewes – his recipients have produced 1.5 lambs and the pure ewes 1.7 lambs each. His stock ram, Eskvale Lionheart, which is jointly owned with Colin Barnes, has produced well-muscled and tall lambs with prominent Beltex heads and features. One pure ewe produced twin lambs – one all white, the other all black – obviously there was some genetic trait coming through from generations ago.

We sold a 12-year-old Charolais grazing cow in Clogher mid-Feburary for £1,500. We only paid £1,800 for her at two years old and in the time we had her, she left nine offspring. On the same day, a British Blue cow weighing 1,000kg made £2.46/kg. Alan’s flushing programme resulted in seven grade A Blue embryos and seven unfertilised Charolais eggs.

My neighbour sold his 60 Charolais bullocks – bought in October 2010 – recently. They averaged 800kgs and sold to an average of £1,650. He reckons they left £250 clear profit each after all expenses. The problem now is how much will it cost to buy in again.

It’s great to see the extra daylight every evening and spring on the way with hopes for an early surge in grass growth and an early turn out for the stock. The first Charolais sale of the year in Dungannon returned a top price of 5,200gns for a November 2010 born son of Lyonsmense Tazar and 27 bulls sold averaged 2,870gns.