Visitor numbers to this year’s Balmoral Show on 22-25 September were well down on the 100,000 who normally attend the event over four days in May. But for the livestock and trade exhibitors, it was great to be back after 2020’s show was cancelled, and this year’s May date postponed.

About 400 beef and dairy cattle were judged in the various classes, as were some pigs and goats, but the normal entry of 1,000 sheep stayed away as the show timing did not suit the breeders.

See also: How the world’s oldest Angus herd is preparing for the future

The mild autumn weather caused some cattle in the hall to develop mild respiratory conditions including raised temperatures and a few cases of pneumonia during the Friday night.

This led to some breeders cutting their show visit short and taking their cattle home early ahead of Saturday judging.

However, the main judging had already been carried out during the previous days, and it was the Aberdeen Angus breed’s time to shine in the beef section.

At just under three years old, Woodvale Miss Annie, owned by breeder Alwyn Armour from Dromore, was shown with her 10-month-old heifer calf at foot. She is due to calve again in February. 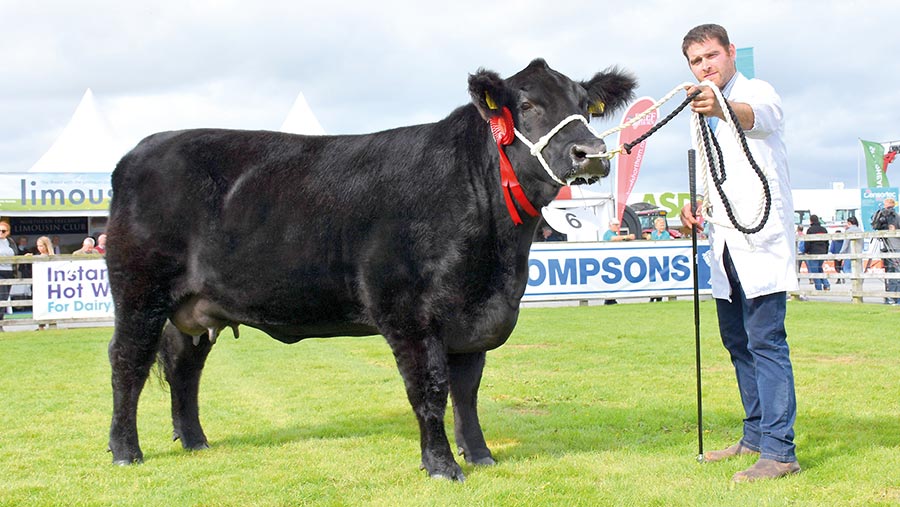 Sired by Oak Moor Mr Paul, she caught the eye of the Aberdeen Angus judge to win the breed championship. She then went on to win the overall beef interbreed championship in what judge John Elliot from Kelso in Scotland described as a “maternal masterclass”.

Mr Elliot said: “I’ve been lucky enough to judge in many countries and I promise you, you can go anywhere in the world, but you will not see a maternal masterclass like I’ve just come across. What an udder the Angus has. She has good balance, is correct and really is a top female.”

Owner Alwyn Armour said: “We are over the moon. It’s a fantastic achievement for us to win the Angus championship and the overall interbreed championship.

“While we have exhibited two Angus reserve junior champions over the years this is our first overall breed champion and first interbreed champion with an Angus.

“We did have a Hereford champion here before,” he added.

Taking the reserve interbreed champion spot was the Limousin champion bred by James Alexander from Jalex Livestock at Randalstown. At almost six years old, and also shown with calf at foot, Jalex Mya is no stranger to the show ring, but this is her first time as champion Limousin. 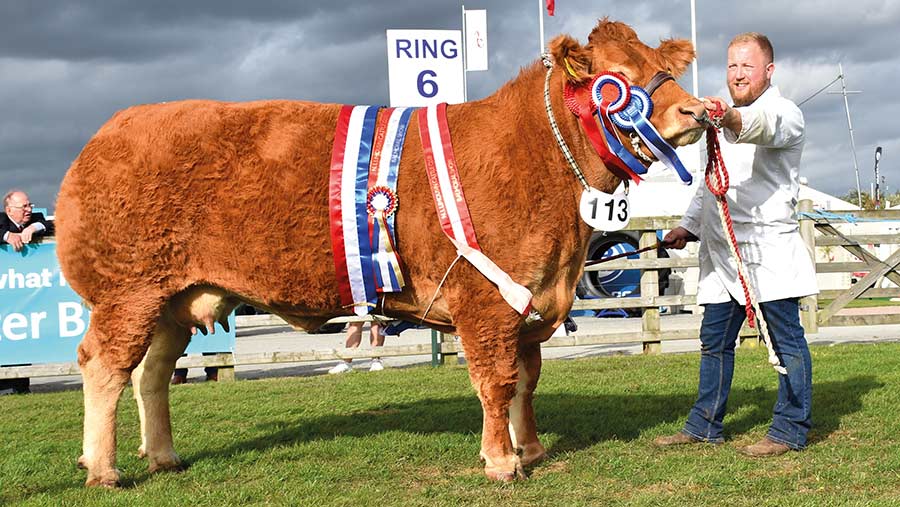 Interbreed judge John Elliot said the Limousin was also a very correct cow with a great udder, and had raised a cracking calf.

In the dairy rings 80 cattle representing four breeds came under the scrutiny of judge Alan Timbrell from Gloucestershire who picked a Jersey cow from the Potterswalls herd as his interbreed champion.

Also winning the Jersey championship on her first visit to Balmoral Show, Potterswalls Excitation Glamour is a five-year-old home-bred owned by the Fleming family. Sired by Bridon Excitation, she is projected to yield 9,000kg. 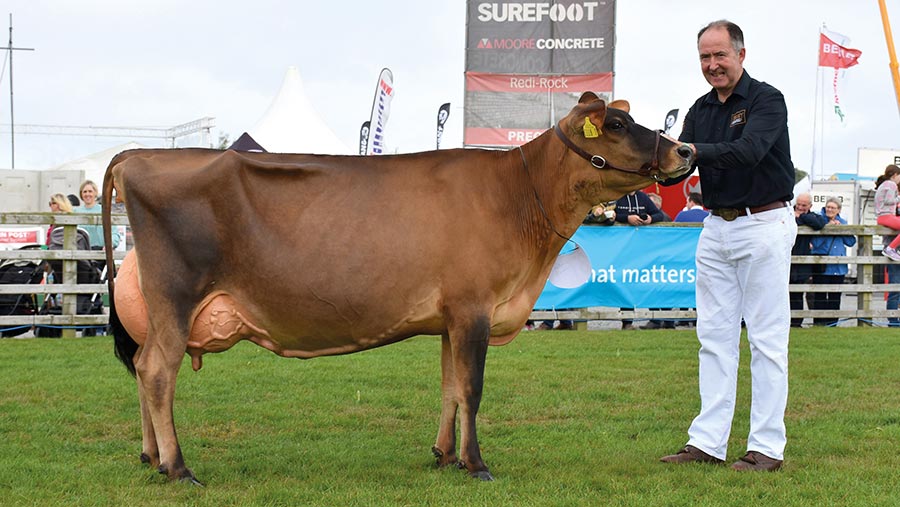 Ashley Fleming said: “She is 10 months calved and is on her third lactation, producing milk at 5.6% butterfat and 4.2% protein. We bred her ourselves going back five generations.

“Antrim Show in 2019 was her first ever show where she was intermediate heifer champion, but she had not been shown since until Balmoral,” he said.

This eight-year-old cow is one of Northern Ireland’s highest classified cows and has given more than 100,000kg of milk in her lifetime. 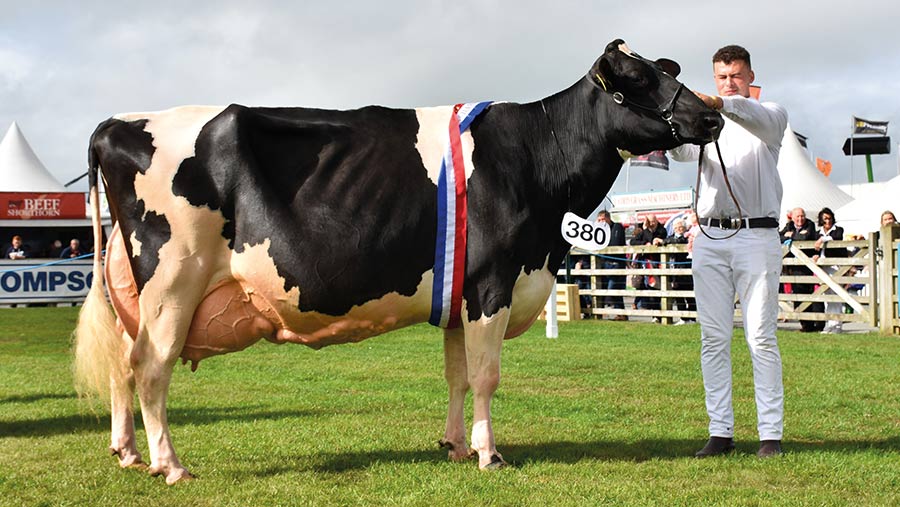 Iain McLean said: “She calved on 4 January and is due again on 1 December. This cow is still yielding 52 litres of milk a day at 4.61% butterfat and 3.38% protein. She has given over 100,000kg in her lifetime. Rose is one of the highest scoring cows in Northern Ireland currently at EX96.”

Mr McLean keeps about 150 cows in the herd, 90% of which are Holsteins, but there are some Jersey, Ayrshire and Dairy Shorthorn cows, too.

“The Jerseys are on their way out,” he said. “They are small and have to battle against the bigger cows in the herd, making them very temperamental.”

There was a huge interest around the pig ring where the Shields family from Kilkeel won the interbreed championship with their Landrace junior gilt, Glenmarshal Frua, born in January. 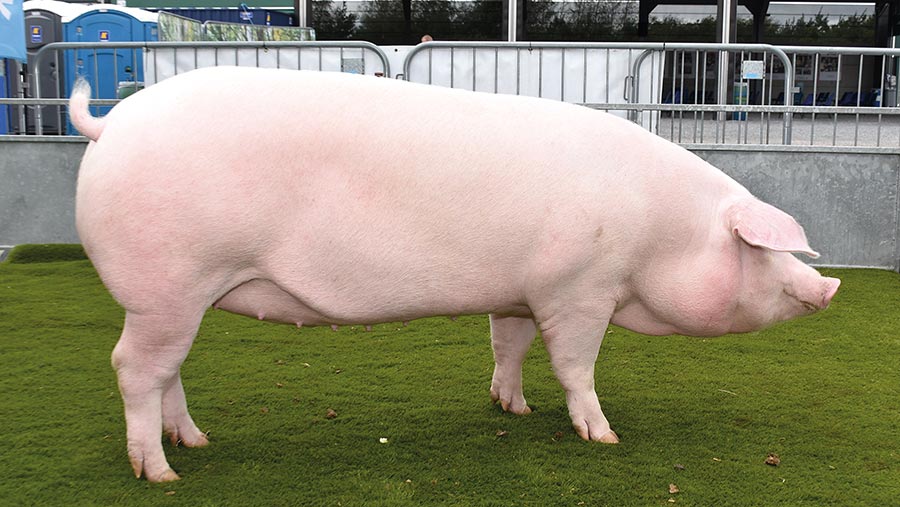 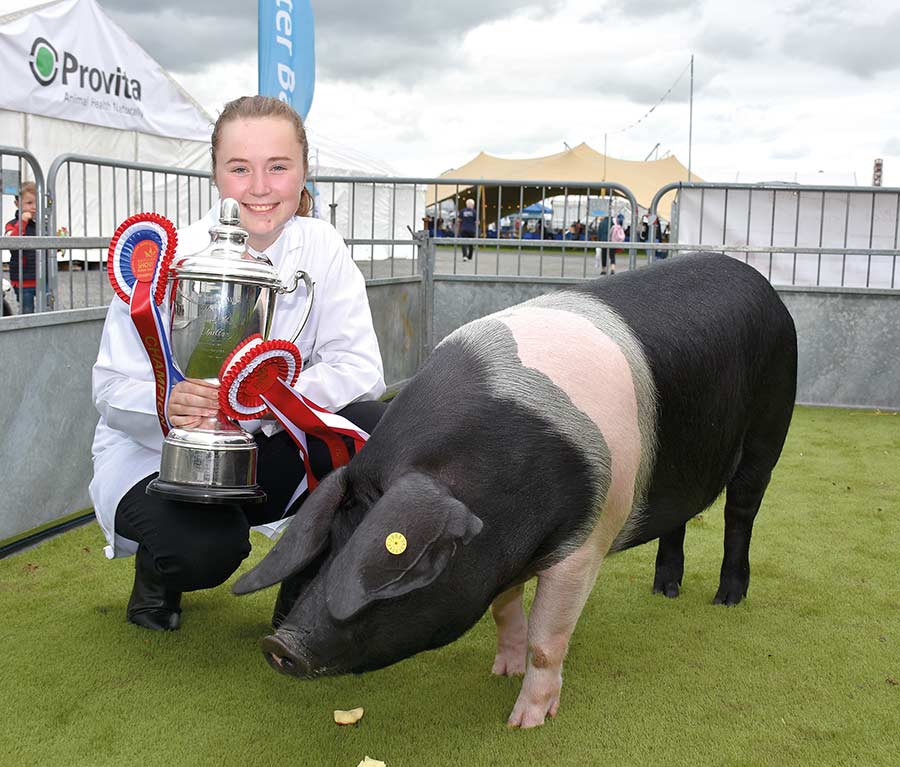