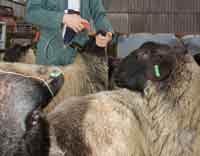 Unsustainable use of anthelmintics cannot continue and with as many as 60% of UK sheep farms already experiencing benzimidazole (white drench) resistance and 30% macrocyclic lactone (yellow drench) resistance, their use must be viewed in a different way.

It is the targeted control of anthelmintics and identification techniques of resistance that has formed the crux of scientific research under the EU PARASOL project, which took to looking at anthelmintic resistance in a novel way.

“Resistance isn’t just a sheep and goat issue, but is also a threat for cattle. We are seeking to identify a basket of options for vets and farmers in relation to anthelmintic use,” he said.

One of the main objectives of the project was to identify when to administer anthelmintics by use of Targeted Selective Treatments (TST) – where only animals showing clinical symptoms or reduced productivity are given drugs – or identifying the most appropriate time to treat entire groups of animals, Targeted Treatment (TT). 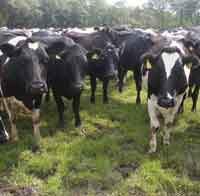 “TST studies using these markers have led to optimised drug use and provide high levels of productivity and maintained drug efficacy,” he said.

“When egg counts are low, within a week liveweight can be reduced. Animals that are performing well will not improve by treating with anthelmintics, with 90% of animals responding to treatment when using liveweight gain as a factor.

“Resistance to BZ has been found to increase more rapidly in monthly-treated groups than in TST groups, with the efficacy of treatment decreasing by 22% after monthly treatments with BZ over two grazing seasons.

“Similarly, efficacy of ivermectin (yellow drench) in monthly-treated groups also dropped from 96% to 81%, whereas efficacy did not decrease in groups subjected to other less intensive treatment strategies.

Using individual weight gains as a marker for individual treatments had been found to maintain both productivity and anthelmintic efficacy in sheep, said Dr Jackson.

A decision support system based on production efficiency was developed for use in identifying the individual in the TST group that would most benefit from treatment.

“Compared with monthly whole-flock treatments, using liveweight and faecal eggs counts almost halved anthelmintic use compared with those being treated monthly while maintaining performance and drug efficacy. The mean efficacy was more than 10% higher in the TST approach than those that were treated monthly,” he added.

“This shows both animal performance and anthelmintic efficacy can be maintained using a TST strategy and the growing use of electronic communication extends the availability of using automated decision support systems and increases the prospect of them being used.

“This data can also be exploited and used in breeding strategies, selecting animals less reliant on anthelmintics,” he said.

But targeting and monitoring animals in high risk periods by measuring liveweight gain, milk production and faecal eggs counts were the best methods to use. Mr Jackson said for larger producers investment in a easy to use handling system allowing weight to be taken easily may pay off.

“Farmers should be monitoring daily liveweight gain and not just for parasite control. Pasture management and genetic selection are also important and must not be forgotten,” he said. 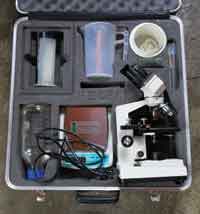 Faecal eggs counts could also be used for monitoring both worm populations and were also the most widely used test for resistance said Innovis’ Eurion Thomas. “Eight UK farmers trialling the FECPAK system, which requires taking faecal samples and looking for worm eggs through a microscope, have found on average the number of doses administered reduced by 35% a year resulting in a financial saving of £663 a farm a year on sheep wormer costs alone.

“This isn’t taking in to account the money saved by checking for efficacy and resistance on farm,” said Mr Thomas. “Sixty three percent of the farmers used FECPAK to check for efficacy of treatment and seven farms completed a faecal egg count reduction test and found resistance to at least one anthelmintic group.

“When the trial farms were initially asked about using faecal egg counts as an indicator of when to worm they were sceptical. But now 79% of clients said using regular faecal egg counting had been a financial benefit to their business, with 74% decreasing the number of treatments to lambs and allowed changing worm policy for adult ewes.”

“Using the FECPAK system farmers are able to do testing themselves and get immediate results rather than guessing at what is happening, or even worse, doing nothing,” added Mr Thomas.

Anthelmintic resistance was also increasing in cattle and although levels were not as high as sheep, control strategies needed to be implemented now, said Prof Vercruyssee.

“We need to be monitoring now rather than just blanket treatments shifting from maximal to optimum parasite control,” he said.

Serum pepsinogen concentration taken from blood samples of calves had been used to determine calf exposure to gastrointestinal nematodes and it had been found that preventative anthelmintic treatments and several pasture management practices such as mowing or extending the turnout date were negatively associated with the pepsinogen level.

“These results show that not only is pepsinogen concentration taken at housing for calves a suitable measure to monitor worm levels, it also allows targeted use of anthelmintics. The fact that the results show pasture management reduced these levels indicate that more control can be done through pasture management,” said Prof Vercruyssee.

It had also been shown that gastrointestinal nematodes in adult cows could have a negative effect on milk yield, and monitoring worm levels was an essential part of herd health management, he added.

Antibody levels to the brown stomach worm Ostertagia ostertagi, one of the most economically relevant cattle nematodes, could be tested in milk samples. The level of exposure could be determined through bulk milk samples using the Ostertagia ELISA test.

Prof Vercruyssee said levels of exposure to this worm were highest in Belgian and the UK at 53% compared with just 6% in Sweden. “Regions with higher levels, such as the UK, were characterised by higher treatment intensity, longer pasture seasons and a low incidence of mowing pastures before grazing, as well as higher stocking density.

“Future studies are needed to identify selective treatments within a herd and to determine costs and benefits for control options. But having this milk test is a step forward and is needed if we are to limit use of anthelmintics and control resistance,” he said.

“Targeted selective treatments should be used by producers, providing in most cases a financial and health benefit to the animals. Although more work needs to be done on some methods, producers shouldn’t be naïve to the growing problem of anthelmintic resistance.”