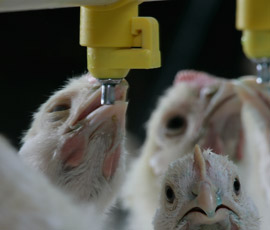 The use of antibiotics in agriculture will come under scrutiny at a meeting of science ministers and national science academies tonight (12 June), as part of the G8 summit of eight powerful world economies.

The meeting will be jointly chaired by science minister David Willetts and the president of the Royal Society, Paul Nurse, who has described antimicrobial resistance as a “global problem”.

Mr Willetts will call for the development of new types of antimicrobials and more data to be shared on antibiotics use internationally. “Open data and open access to research are also important international issues that I want to see progress on,” he said “They are fundamental to the government’s transparency agenda and will speed up scientific discovery and drive growth.”

It is understood that the chief medical officer for England, Dame Sally Davies, who in March called for a ban on antimicrobial use on farms, will brief the meeting.

Richard Young, policy adviser at the Soil Association, said that the amount of antibiotics fed to animals needed to be restricted. “People across the UK are also eating pork and chicken, and drinking milk from animals, most of which are routinely given antibiotics when they are not ill. We are calling on G8 leaders to acknowledge that we are being very irresponsible and courting disaster.”

Farming groups were quick to point out that the use of antimicrobials in the UK was well regulated, and rejected calls for a ban. The Responsible Use Of Medicines in Agriculture Alliance (RUMA) – a group of 23 food and farming organisations – welcomed the minister highlighting the issue.

But John Fitzgerald, the group’s secretary general, warned that arbitrary reduction targets were not responsible and could increase the risk of resistance.

“Antibiotic resistance is a complex issue and all groups need to work together to develop decisions based on sound science to manage the risks while allowing the optimum benefit to be gained from the use of antibiotics to treat humans and animals,” he added.

The British Veterinary Association as well as the British Poultry Council both expressed support for RUMA’s position.