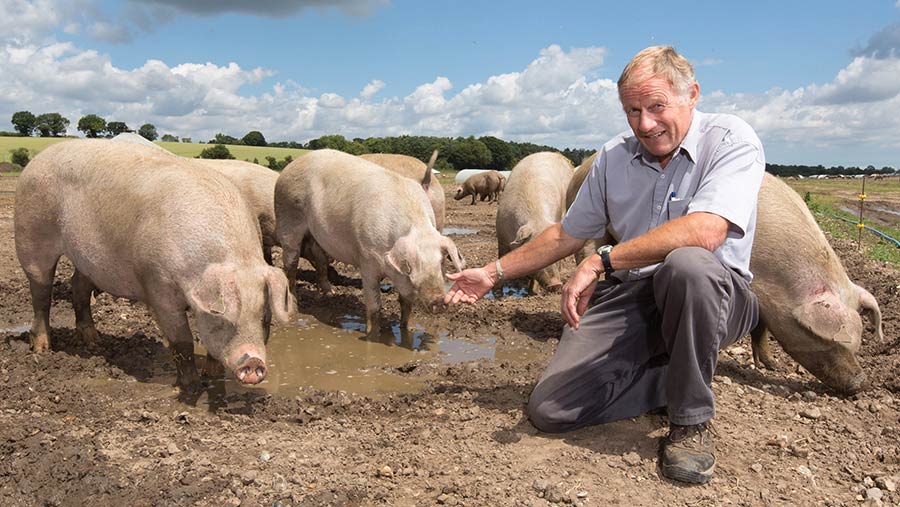 A strict culling strategy is at the centre of improvements throughout pig producer Simon Watchorn’s outdoor breed-to-finish herd.

Simple record-keeping and assessment of the whole herd’s performance have helped pinpoint where to make decisions and give greater control of production and profitability.

“If your business is producing something, whether 7kg piglets or finished animals, you have a process that has to be managed and controlled, or it will control you instead.

“Ask yourself how your business makes its money and then think about how each stage of the process contributes to that.”

We find out which areas he identified to help improve efficiency.

1. Capped the number of sows weaned

To get control of production, producers need at cap somewhere in the system, says Mr Watchorn.

“I wanted to make sure I weaned consistent numbers of piglets each time.

“If you’re aiming for 300 pigs per week and one week it’s 250 and another it’s 350, you can’t be as efficient and profitable in your rearing and finishing operations.

“The numbers we’d recorded over time showed the fluctuation was in the numbers of sows weaned, not the numbers of piglets born alive, and we could see we needed to cap weanings at 26 sows per week to provide an even flow into the rearing herd.”

He farrows slightly more than 26 sows to ensure he always has exactly the same number of sows for service.

There is an extra farrowing block setup, where any excess sows suckle for a further week, up to 35 days.

If he needs to cull some pigs at farrowing, he can be more selective, based on their performance or parity number.

Capping weanings at a fixed number means that incoming gilts only replace older and poorer performing sows, rather than filling in gaps in numbers each week.

The number of piglets weaned per week is now consistently close to target, with Mr Watchorn looking for 300 animals, plus or minus 10.

Balancing the parity profile of the herd is a key factor in maintaining performance.

With the help of consultant Stephen Hall, Mr Watchorn started watching the progress of each group of replacement gilts brought in.

Rather than just considering the average performance of the herd, or batch, which have a mixture of parities, he monitored each cohort of gilts during their lifetime in the herd.

He now culls all sows at parity five, as his figures showed consistently over time that not all parity six sows were performing well enough; there was a risk of lower productivity and higher pre-weaning mortality.

“There will always be the odd sow that continues to perform well in parity six, but you don’t know which one.

“And why wait for a sow to let you down when the chances are high that, from parity six, they will.”

Having a tight parity profile as a starting point can help maintain more control if there’s a major health challenge.

“During those challenging months, I was able to keep a few sows until parity six to make sure we kept herd numbers up and it meant the performance dip wasn’t as severe as it might have been.

“If the herd had still had some much poorer sows in parities eight or nine, we would have been in a poorer position to begin with and had few options to fill the gaps.”

Farrowing rates typically run at 92% to 93% and didn’t dip below 91% during the PRRS challenge.

A lot of effort has been put into managing and preparing gilts, which are all bought in.

The aim is to get five out of seven of the gilts he puts in each time to stay in the herd until parity five.

“It’s costly if you have to keep rearing or buying more gilts to replace animals that only produce a litter or two.”

“If every gilt you started with survived to have five productive litters, you would have a replacement rate of 25%, but a lot of herds have replacement rates of 55% or more.

To achieve the parity five culling pattern, replacement rate was increased to 65% deliberately to get the correct number gilts entering the herd to replace older sows.

Since then, he has been able to drop it down to 55%, bearing in mind he is still dealing with the after effects of PRRS.

“The is aim to continue to reduce it – but only after each parity profile is where I want it to be in each weekly batch.”