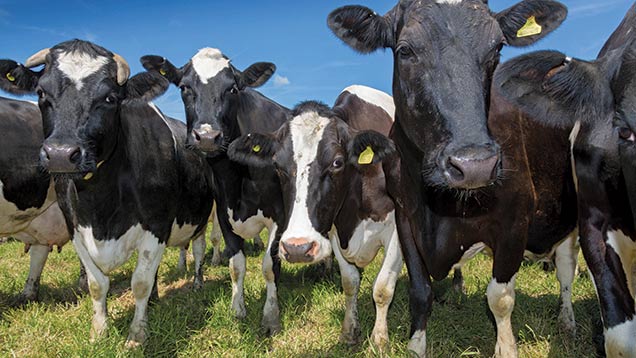 Making the switch to block calving from a year-round pattern has resulted in efficiencies and a better work-life balance for two Welsh farming businesses.

Edward Morgan converted his system to autumn milk production and nearly doubled his herd size, while for Matthew Evans a spring calving pattern was a good match for the climate and grass-growing capability on his Pembrokeshire farm.

It also coincided with a need to upgrade milking infrastructure on both farms.

See also: Weighing up the pros and cons of block calving

The calving patterns may be different, but they share common benefits.

Both men say block calving has removed unnecessary complications from their systems while providing a better balance between work and life.

For Mr Morgan and his parents, Terrig and Gwyneth, autumn calving offered an opportunity to simplify the feeding regime at Carreg Y Llech, their 72ha farm near Mold.

It meant the herd could be fully housed on a winter ration from 1 September, before calving. “Instead of having a few cows calving here and there, we now have a dry cow group that can all be fed the same ration,’’ Mr Morgan explains.

“We no longer bother with a mixer wagon or feeding TMR over the summer, the cows just get round-bale silage at the barrier if we are short of grass or cake in the parlour.’’

The Morgans had employed a consultant to explore three options for their business – autumn, spring calving or to retain the year-round pattern.

“Autumn calving best suited the farm. It gets wet early on in the autumn and we can’t turn out that early in the spring.

“Under this system we are drying the cows off by the time the grass starts to slow down in the summer,’’ says Mr Morgan.

The size of the grazing platform would not have been conducive to spring milk production, either, with only 42ha accessible from the parlour.

The Morgans opted for a gradual shift in calving pattern, starting with the heifers – these were synchronised and inseminated as one group.

Half the cows were served to calve in the autumn and the following year this approach was used on the entire herd. Mr Morgan does all his own AI.

Although it can be difficult to keep the condition off stale cows, there were no issues with cow health or cows calving down too fat.

“When they are about to dry off, the cows are on grass; they are working hard at that point. They are on old pastures for two weeks and are fed a dry cow ration.’’

Cows calve over a four-month period. “We usually get one or two stragglers, this year the last cow calved on 15 January, but calving is largely over before the beginning of January,’’ says Mr Morgan.

Milk is supplied to Muller Wiseman on a co-operative aligned contract.

By calving on 1 September the Morgans miss out on the price bonus for August milk, but Mr Morgan says this is a sacrifice that needs to be made for the system to work.

“We had to have a start point somewhere. In the first year we were calving in August, but we have put that back a month, so when the cows are housed they can stay housed,’’ says Mr Morgan.

“When they were housed in August it was tempting to keep some cows out at grass, but 1 September is easier from a management point of view; it is the most profitable and simplest approach.’’

The herd is fed maintenance plus 30 litres in the form of a total mixed ration (TMR) that is 80% silage combined with maize, crimped wheat and a protein blend.

In the parlour the cows get 0.4kg of concentrates for every litre produced, up to a maximum of 6kg.

Three cuts of silage totalling 142ha are harvested, with the third cut made into round bales.

Total yield across three cuts averages 40t/ha. Last year the silage analysed at 11.3MJ/kg dry matter (DM) with crude protein of 15.4% and a D value of 70.

Yields have taken a hit since the calving pattern was changed – average annual output initially fell to 7,900 litres from 8,500 litres, but the number of heifers in the herd was influential.

The biggest challenge is fertility – conception rate last year was 42% – but this was also the case under the previous system.

Mr Morgan runs Holstein Friesians but is contemplating using cross-breeds in the future.

The herd is served to Friesian sires for eight weeks and all heifers are retained as replacements.

In 2012 a new 28/28 point parlour was installed. The existing bulk tank was retained because at 7,700 litres it has sufficient capacity.

“We had installed a big tank because we were on an every-other-day collection when we were supplying Dairy Farmers of Britain.

“There is enough capacity for the extra milk because it is collected every day,’’ says Mr Morgan.

He is certain the shift to autumn calving was the right decision for the business. “Although there are mad periods at calving and at mating, this system allows us breathing space to focus at other times.’’

Matthew Evans, who farms with his wife, Margo and her parents, Glyn and Morfydd, at Lochmeyler Farm, Llandeloy moved to spring milk production to simplify management. It also allows staff to focus on one task at a time.

“Block calving suits us as a farm and a family. We have young children and although it is hectic in the spring, the family knows I am more available in the summer,’’ says Mr Evans.

An extensive, grass-based system was a natural fit for the farm. “We are quite dry in the spring – we get an average of 112cm of rain a year – and we can grow grass well,’’ says Mr Evans.

An ambition to reduce feed costs was at the heart of the change three years ago. Under the year-round calving system, 1.5t of concentrates were fed a cow, but this has now been reduced to 1t.

“We are feeding a lot more cows, but our feed costs are lower. We were always striving to cut costs and improve farm productivity and by reducing purchased feeds we have achieved this,’’ says Mr Evans.

Turnout depends on the season – last year it was 10 February, but wetter conditions delayed grazing until 1 March.

Another trigger for moving to spring calving was the need to update infrastructure, in particular an ageing 14/14 jar milking plant.

“We wanted to install a new parlour, but we wanted it to be as simple and as low-cost as possible. We didn’t want the added expense of computerised feeders and other unnecessary extras,’’ Mr Evans explains.

He opted for a 24/48 swingover parlour with basic feeders, but already cow numbers are pushing this to the limit of its capabilities. “

We intended to be milking up to 280 cows, but we have pushed numbers up because we bought a block of land last year. We have two people milking to get the job done quicker.’’

Mr Evans changed the calving pattern by initially establishing both spring and autumn blocks. No heifers were served in the autumn before the transition to full spring calving.

“We combined two groups of heifers with some calving down at two years and the others at between two-and-a-half and three years. We had 120 heifers coming through in the first spring.

“We stopped serving the cows for three months, but in retrospect we should have sold the autumn-calving cows and bought in fresh cows because those gave us the most trouble with mastitis and cell counts.’’

Mr Evans’ biggest concern was managing large numbers of baby calves, but there are three staff to share the workload. “Accommodation was a bit of a problem, but we have converted a lean-to shed and rear the calves on straw bedding.’’

He decided against creating permanent paddocks until he is certain of the optimum herd size.

“Our cow numbers aren’t settled, so I didn’t want the expense of creating paddocks only to find the fences were in the wrong place,’’ says Mr Evans.

Water troughs were installed and 1.5km of tracks established. Temporary fences are used to allocate cows fresh grass after every milking.

“It is loosely based on a paddock system,’’ he adds.

The grazing platform is heavily stocked at four livestock units a hectare, therefore silage is produced on rented, off-lying land or on the 28ha block of adjoining land purchased last year – 16ha of which is clean.

Seasonality penalties for spring milk have forced a rethink on the initial calving dates and the dry period.

“We are going to let the calving pattern slip by a month and start calving at the beginning of April,” says Mr Evans, who supplies Glanbia Cheese.

When he first set up the new system, there was a three-week dry period and barren cows were culled.

This season, with an abundance of silage, he continued to milk the barren cows and late calvers, so the herd was never completely dry.

He hopes that delaying calving by a month will help reduce the 16-week calving spread to 12 weeks. British Friesian and New Zealand Friesian genetics are used.

“We initially selected bulls based on fertility because we had good yields for a spring calving herd, but we are now going back to a balance between production and fertility.’’

Although the pattern has altered slightly from what he first intended, Mr Evans says the benefits of the system are unchanged.

“By doing everything in blocks – calving, heifer-rearing or AI – everyone on the farm can be focused on one job at a time.

“At the moment, while we are in the thick of calving, the system doesn’t feel very simple, but come the summer and autumn the workload will be much lighter.’’