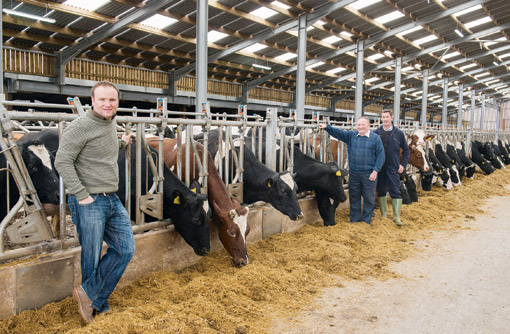 Feeding co-products from bio-ethanol production is nothing new, but it is something increasing numbers of livestock producers may be looking at as forage supplies and quality become more unpredictable.

And, while there is only a limited supply of co-products coming out of distillery plants, a new era of biofuel production could offer similar high protein and energy products, which could potentially substitute cereal grains, as well as expensive soya.

Feeding supergrains and pot ale syrup has helped dairy farmer Andrew Stewart “out of a hole” as he expands his herd and sets about reseeding fields.

Mr Stewart, who farms alongside his dad Hugh, started feeding co-products at the end of last year, as he began increasing cow numbers from 150 up to 400.

“A lot of things happened at once,” says Mr Stewart. “We wanted to increase the feed value of silage and also spin it out as we are reseeding a lot of our grassland, so needed something as an insurance policy.”

As a result of the changes being made on farm, Mr Stewart completely changed the diet – moving away from a full TMR with home grown wheat and barley, grass silage and blend to a part-TMR diet.

The diet, which costs 15.3p/litre with a feed conversion of 1.41 litres of milk for every kilo of dry matter, consists of:

“In the past we would have grown 162ha of grain, half of which we would have sold and half fed to the cows, but last year we made it all in to wholecrop and this year we are reseeding 102ha of that land.”

Mr Stewart is feeding supergrains which are a more potent version of draff with a dietary value of 13 ME and 32% protein. He uses them as a forage replacement element containing high energy and protein.

“By feeding supergrains we have been able to reduce the amount of silage we feed by 6kg a head a day.”

By March this year Mr Stewart hadn’t even opened his first and second cut silage. “We are trying to conserve as much silage this year as we are re-seeding fields, so have enough silage to cover us up to August, with 60% of the forage at the moment coming from wholecrop.”

Cows are milking better than last year yielding 8,700 litres according to Mr Stewart, with the aim to get 4,000-4,500 litres of milk from forage.

Mr Stewart says even when he has finished expanding the herd and reseeded fields can be used, he will certainly keep using pot ale syrup (35% dry matter with 14 ME and 35% protein) and depending on forage supplies will use supergrains.

“We use the pot ale syrup to aid palatability. Cows are eating up all the feed and we are feeding once a day. Cows are looking great and they are coming into season well,” he adds.

Feeding a molasses pot ale blend is something beef farmer Robert Neill has been doing for many years. Mr Neill, who runs 300 Limousin-cross cows on 435ha at Upper Nisbet in the Scottish Borders, was buying small amounts each year to add to the homegrown ration of barley, silage, straw, minerals and beans.

But with prices of cereals going up year on year, Mr Neill says he wanted to look at reducing the cost of the mix, so decided to install a 32t tank to store the pot ale a year ago. But even at a cost of £6,000 to install a tank, including fittings, Mr Neill says it was worth it.

“By being able to buy in bulk we are paying about £132/t for molasses pot ale, but it was almost double that when we were buying just a small amount.”

All cows, younstock and finishing cattle receive 1kg a head a day of the molasses pot ale bend. It not only acts as a cheaper source of energy, it also helps suppress the dust from the homegrown grain which is dried and stored on the farm.

Mr Neill says if he was just feeding in-calf cows he would feed pot ale syrup as it is cheaper.

“The molasses gives more sugar and the finishing cattle need a sugar and energy boost rather than protein.

“The sugar energy offsets the starch energy so it prevents finishing cattle from laying down too much fat,” he adds.

Mr Neill is feeding the molasses pot ale as part of a TMR feeding system. The ration, which has an energy value of 12ME, 13.5% protein, 33% starch, 5% sugars consists of:

The ration is costing £2.03 a head a day to feed or in terms of cost for every kilo of liveweight gain it is costing £1.45.

“This is significantly cheaper than when we were not using the molasses pot ale blend,” says Mr Neill. “To get 1kg of liveweight gain with ad lib cereals it was costing £1.72. So there is a 27p/kg difference in feed costs between the two.

“We have also saved 2kg of premix a day by feeding molasses,” he says.

In terms of total costs over the 90 day finishing period, Mr Neill believes the total benefit of feeding the TMR mix with the molasses pot ale compared to ad lib cereals is just shy of £9,000.

“There is a £33 a head difference on a 90 day finishing ration meaning a total benefit to the finishing cattle enterprise of £8,580.”

Even though the diet is cheaper performance has not been hindered, with cattle still achieving 1.4kg daily liveweight gain.

“The coats are shinier and they also seem in better health, too,” he says.

Food conversion rate has also increased by 5% by feeding the new TMR mix due to better rumen health. However, there are some drawbacks to feeding molasses pot ale, according to Mr Neill.

“The products aren’t the easiest to handle and the shelf life of different products can vary.

“However, we have always found the product consistency to be fine with a dry matter of between 57-60%.”

It is something beef farmer Guy Lee has been feeding his Abeerdeen Angus cattle due to the costs of silage making increasing and the number of acres limited as cattle numbers increased.

“As we grew the number of cattle and didn’t increase the number of acres, we had to look at something else. We see feeding draff as buying in acres. We want to grow the business, but not have more grass.”

Mr Lee who finishes cattle for Dovecote Park gets draff and sugarbeet pellets delivered and mixes at a ratio of 5:1 which is then stored in an Ag-Bag.

The completely sealed nature of an Ag-Bag means he doesn’t get any waste and while it is not the cheapest way of doing it, there is no capital investment needed.

The grainbeet (mixture of draff and sugarbeet pellets) has an energy value of 11.8 and 17% protein. The sugarbeet helps soak the moisture up and bind the product together. “It is a good energy feed, which we were struggling to get out of barley,” says Mr Lee.

Draff is expensive to buy in winter so Mr Lee buys it in April or May at a cheaper price.

The draff is replacing barley in the grower ration and some silage. “Before feeding draff we were feeding twice as much silage in the ration, so it has really cut it down. If farmers are running out of forage, there is no reason why they couldn’t replace or extend the forage with the draff,” he says.

“The cattle are performing well on it and we are getting in excess of 1kg a day on the growing ration. I can’t see any downside to feeding this stuff, says Mr Lee.

“The more you feed co-products the more problems there can be with rumen function and the fibre digesting bacteria.”

However, despite traditional recommendations saying distillers’ grains should be limited to 10% of dry matter intake in dairy cows and 20% in beef cattle, new research by University of Illinois suggests otherwise.

Mr Gilchrist adds: “The secret to feeding higher levels is about protecting the parent forage, which the Keenan allows. It’s about maximising forage digestion.”