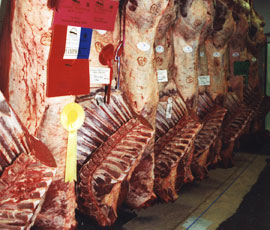 British beef carcass performance fell in 2010 as a result of increased dairy-bred numbers in the market.

Figures released from EBLEX show the number of prime British cattle meeting the ‘R4L or Better’ target market specification fell from 51% in 2009 to 49% in 2010, while still remaining substantially improved on the 45% figure being achieved five years ago.

In particular, classification of young bulls fell from 57% to 48%, with the amount reaching conformation of ‘R or Better’ falling from 59% to 49%.

Overall, classification of heifers reaching the market target remained constant at 47%, with conformation targets increasing from 60% to 62%, while the amount of steers meeting target decreased from 52% to 50%.

EBLEX meat scientist Kim Matthews said the fall in carcasses meeting the market target was due to a greater number of farmers finishing pure-bred dairy animals.

“People were holding on to black and whites but the previous year we were seeing animals coming through at a time when a lot of black and white were not being taken through to finish,” added Mr Matthews.

“Conformation has slipped back, but generally in terms of fat selection, I think producers have got pretty good at selecting to the target; however, there’s still a tendency for some producers to take animals that are little but fatter because there’s still a feeling out there that weight pays.”

He said the failure to improve conformation quality emphasised the need for “greater emphasis on breeding improvement to secure continued carcase quality gains” and practical guidance on how to improve carcass quality was available free of charge to English levy payers through the EBLEX Beef Better Returns Programme and the Beef Action for Profit resource.