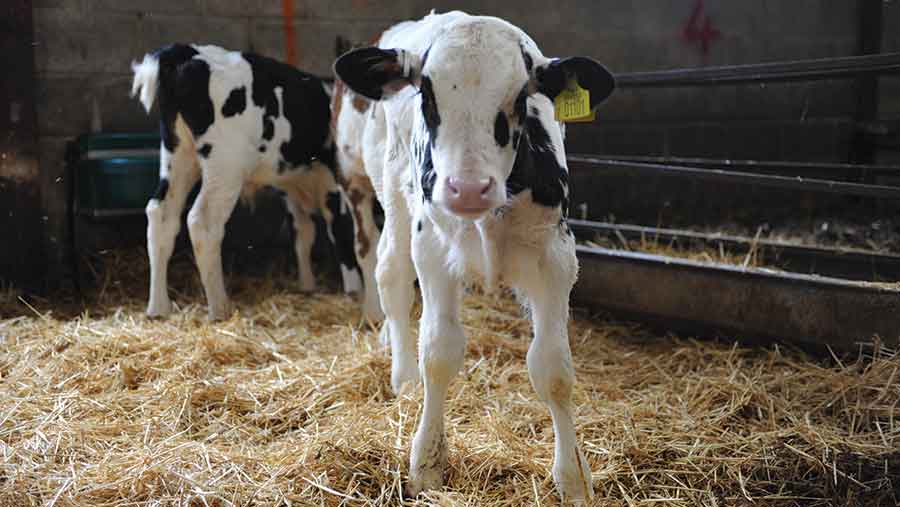 Recurring bovine TB breakdowns challenged the profitability of the Sockett family’s suckler beef business, so they switched to rearing dairy bull calves in a housed system to reduce infection risk and improve cashflow.

The catalyst for change was a major breakdown, which resulted in the loss of 27 animals.

“That was devastating but TB was also ruining our store beef enterprise,” says Dennis, who farms 150ha at Moeliwrch, near Oswestry, with his son, Jonny.

“We were selling the offspring from the suckler cows as stores but when you can’t move the cattle off the farm it creates huge financial difficulties in a system where the margins are already very tight,” he explains.

The family looked at alternatives to complement their 1,100-ewe enterprise – a beef system that would be at reduced risk from TB and would generate cashflow for the business.

Rearing black and white bull calves for the beef market ticked those boxes. “The animals are younger and they are housed so we are cutting our risk,” explains Jonny, who also has a silage contracting business.

The herd of 60 suckler cows was sold and £30,000 invested in converting a shed to rear calves. Eight pens were created with each divided in two to provide a loafing area in one half and a feed area in the other.

Two automatic milk feeders are accessible by the four pens which house the pre-weaned calves. 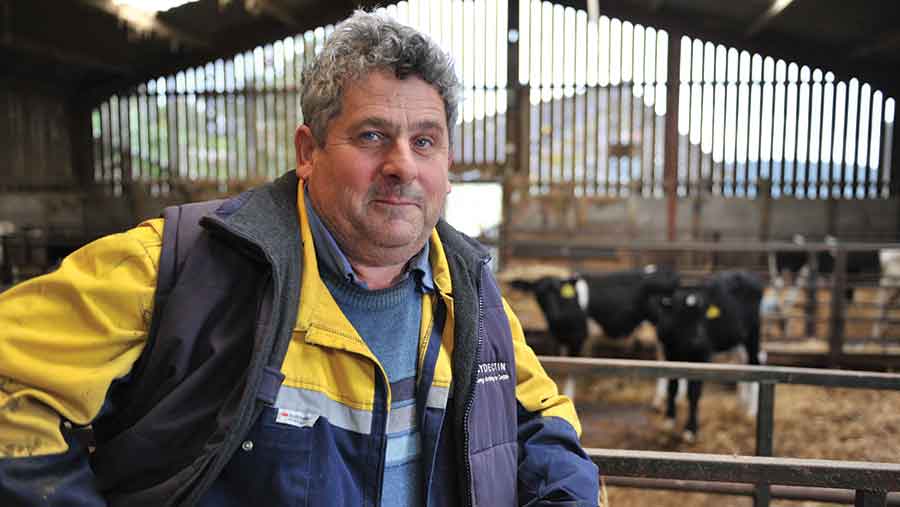 There is a fresh intake of 32 calves every four weeks so as one batch is weaned another arrives.

The calves were initially sourced directly from dairy farms, but there were health and performance issues because many had not received colostrum.

“We were getting high levels of mortality,” Jonny recalls. “When the calves arrived it was clear they hadn’t received colostrum and the move was too much for them. We were injecting and vaccinating but it just wasn’t helping.”

Calves are now bought from the Buitelaar collection centre at Wrexham, mostly black and white bulls weighing over 60kg.

An advantage is that Buitelaar can provide a supply of calves throughout the year to meet the need for a continuous throughput at Moeliwrch.

Mortality is currently 3.5% – higher than the Socketts would like – so they are reviewing the shed’s ventilation. “We have got a fan in the shed but we are now planning to fit a tube fan too,” says Jonny.

One of the biggest challenges is settling the calves into a feeding system after they arrive on the farm.

“When they come from a collection centre you don’t know their feeding history,” says Jonny.

Some calves have been reared on a cow, some on a teat and the others on a bucket, he explains.

“It can take several days for some of them to adjust to the machine so there is a bit of work when a bunch comes in,” he says.

“If they were baby calves we would be in trouble but these are older so they have age and strength in their favour if they miss some feeds.

“If you start with a good calf, one that has had colostrum and a good start, they will hit the ground running.”

The calves achieve average daily liveweight targets of 0.8kg before weaning and 1.3kg between post-weaning to sale.

All the calves are sold at six months and at weights of 200-240kg to a large-scale finisher in Yorkshire and the Socketts are paid a flat rate for each calf.

The calves are TB tested 60 days before they leave the farm but there has been no indication of the disease since the rearing system was established in November 2016.

Good hygiene is a priority with pens scrupulously cleaned and disinfected between batches.

BVD tag and testing gives peace of mind that there are no Persistently Infected (PI) animals in the herd. “We take BVD very seriously because it is a disease that could decimate our business,” says Jonny.

He admits the margins in bull beef rearing are tight. “There is only so much money you can make from a Friesian bull. They are a niche market; not many people want to finish them.”

But it is providing the business with a regular income. “It is a bit like receiving a milk cheque. We get an income every month and that helps with the cashflow.

“When we had the sucklers we would sell a big group of animals in one go but then there would be nothing for six or eight months.”

Dennis admits to missing the suckler herd. “We were selling good cattle at U grades.”

But he concedes the change of direction has provided more certainty for the business. “With each TB test it wasn’t a case of whether we would lose any animals but how many. We haven’t had any issues with TB since we started rearing calves.”

Calves arrive at Moeliwrch in the evening and are fitted with jackets and placed in pens with access to ad lib water, calf pellets and straw.

The following morning they are fitted with collars linked to the calf milk feeder and are “tag and tested” to determine their BVD status.

Calves are then put to suckle on the milk feeder.

They are on milk for 31 days – six litres a day for the first 21 days split into six one-litre feeds, together with 850g of concentrates.

“We try to mimic feeding as closely as possible to natural suckling on a cow,” Jonny explains.

“We initially tried three two-litre feeds but found that the calves would sleep after that bigger feed and then miss a feed.”

He analyses the computerised feeding records two or three times a day, comparing the volume of milk a calf has consumed in the last 12 hours compared with the previous 12 hours.

“Once they are on two litres we wean them completely,” says Jonny.

Most of the concentrate intake comes from an 18% calf pellet but a quarter of the diet is a high-starch beef fattening nut which helps to develop the rumen.

“When they have weaned we decrease the calf starter nut and increase the fattening nut to take advantage of their age and feed conversion. The older a calf gets, the poorer its feed conversion efficiency,” says Jonny.

Over the course of the rearing period, each calf receives between 60-70kg of the starter nut and 500kg of the fattening nut.