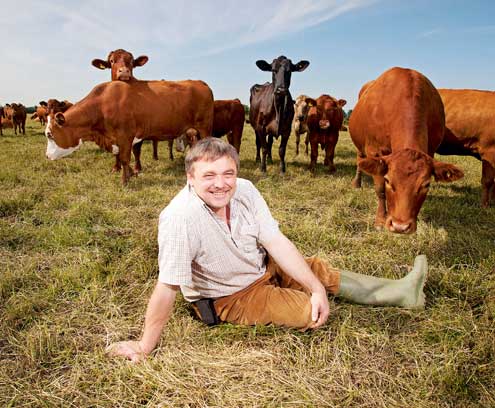 Ease of management, a focus on the maternal line and innovation link all of this year’s finalists for the 2012 Farmers WeeklyBeef Farmer of the Year Award. All of them have overhauled their businesses in recent years and proved that a focus on performance figures and costs can really benefit the bottom line

Neil Rowe’s pioneering building design at Manor Farm, Abingdon, places him at the forefront of beef innovation. Having overhauled the dairy business on the same estate, Neil has transferred his knowledge of high-performance dairying into beef production and designing “The Beef House”.

“The whole idea of measuring, recording and making subsequent management changes has been the main thing I’ve learnt from dairy,” says Neil. When the estate decided to move away from dairy and go full circle back to beef production, Neil took over the management of the beef enterprise and introduced something completely new.

“I wanted a simple, easy care system and the opportunity to sell genetics without going to shows and sales, and wanted a breed based on EBVs and science, not personality.”

Consequently, the decision was made to set up a Stabiliser herd of 150 cows, currently split between 100 autumn calvers and 50 spring calvers. The estate has moved away from being totally organic, but continues to farm to organic principles. The spring calvers are run on organic land in HLS and the autumn herd on conventional land.

The focus is on selling quality breeding females into the Stabiliser pyramid and steers to Morrisons on a premium contract. Heifers are sold at 13-14 months at 400kg, with no concentrate fed, for an average £1,240 a head.

Steers go at 17 months at 340kg carcass weights, with autumn calves gaining an average 1.44kg a day over the finishing period and achieving a margin of £334 a head, and spring calves gaining 1.1kg a day and selling with a margin of £221. Currently all bulls are cut, but the plan is to keep bulls from top EBV cows entire.

Neil says the beauty of the Stabiliser breed and the system is its simplicity. “In principle I don’t like work and in practice I want a system that is simple and can run itself.”

Such ideals and the fact he is away three days a week doing independent consultancy work is at the heart of the design of his new pioneering “Beef House”.

“I wanted a unit where all animals were in one air space – something which conventionally you’re told not to do,” he says.

The building is set up so that cows and calves are at one end and weaners and finishers at the other. Twenty-six-foot helicopter fans work in reverse, pushing air down and out – completely opposite to the stack effect.

“This means the whole volume of air is changed every three minutes. It also costs less than 20p of energy a day to run the fans at full speed,” Neil explains. Seventy per cent of water requirements for stock inside and out are also provided for using a rainwater harvester. “The whole aim is to produce low-carbon beef and I think I can produce it at 50% of the national average carbon footprint in this shed,” he says.

Applying another trick learnt from his dairying days, Neil has installed computer-timed lights that produce 16 hours of light at sun frequency, automatically followed by low red lighting. The whole building is designed so feed-up and bed-up times are kept to a minimum and carried out by one man. When it comes to worming, stock are only treated when necessary based on faecal egg counts.

Using a mixer wagon and STEP box also ensures consistency in feeding – something he views as crucial. He believes including treated Linseed in the diet not only produces beef with low saturated fats but also reduces methane outputs and improves cow health.

Neil is heavily involved in industry, hosting EBLEX meetings, undertaking a Nuffield Scholarship and raising funds for the Send a Cow charity. He also has an on-site farm shop allowing “local people to eat local”.

So what of the future? Neil has a host of ideas, including the potential of starting up the “Oxfordshire Ox” brand and artificially inseminating the bottom 20% of stock to Charolais to give more performance when it comes to finishing.

McDonald’s buys beef from more than 16,000 British and Irish farmers each year and we’re committed to working with these farmers to ensure they have a successful and sustainable future. We are therefore proud to once again support the Farmers Weekly Beef Farmer of the Year Award.”