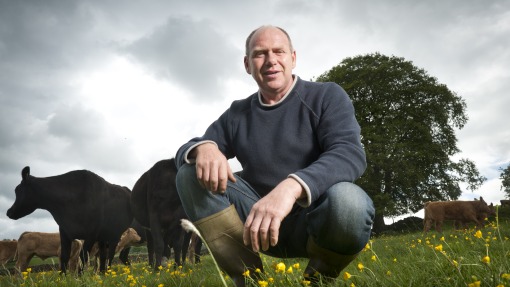 EBLEX statistics show suckled calf producers are still losing money, with the top third of lowland producers losing about £60 a head while average producers producing have negative margins of £236.72 a head.

However, it is something that doesn’t have to be the case as Farmers Weekly’s beef focus farmer Simon Frost of Hopping Farm, Derbyshire, has found.

He says the secret to profitable beef production lies in sire selection and use of EBVs. He uses bulls which are easy calving with below average birthweights and have high growth rates and eye muscle area EBVs. These types of bulls are termed “curve benders” and can be found in all breeds.

Watch a video of Simon Frost

Duke-sired calves achieved the highest weaning weight at 345kg (at 203 days) and the highest daily gain from birth to weaning of 1.5kg.

Clifford calves achieved the highest slaughter weight at 782kg as well as carcass weight at 467kg.

The fastest finishing calves were by Duke at 430 days while both Clifford and Duke calves shared the best daily gain to slaughter of 1.67kg. The highest Daily Carcass Gain from birth was 1.10kg achieved by Duke- sired calves.

While Clifford had a Calving Ease Direct EBV of 0.5 with a birthweight EBV of +3.1kg, with increased accuracy these have now changed to -4.5 and +3.5kg, respectively.

This has been mirrored by a high level of assisted calvings of Clifford-sired calves, which also recorded the highest birthweights.

Clifford will not be used on many cows this year even though he has the highest EBV for 400-day weight.

“We selected Clifford on his high figure for retail beef value. He had the highest index of any bull in the sale, with a big muscle score and negative fat score,” says Mr Frost.

“He was +0.5 for Calving Ease and we felt prepared to compromise on that to meet our need for a bull to really ramp up our performance.

He has been a sensational sire in terms of the performance of his calves, but we’ve had to assist at just about every calving.

“We bought Clifford just before the changeover from Signet recording to Breedplan recording. In my opinion, Breedplan is a superior system on which breeders can base their selection.”

The highest overall carcass conformation score of the 2011 calf crop was achieved by Altra calves with 44% E and 55% U grades, explains Mr Marsh.

“Unfortunately, there isn’t an EBV for eye muscle area and fat depth for Altra. But pedigree breeders must be encouraged to scan cattle to identify bulls whose progeny will grade well – especially heifers that can be taken to heavier weights without getting over-fat on intensive systems.”

The latest team of sires being used at Hopping Farm – Maerdy Grubby, Vexour Freddy and Balthayock Elector – have even superior EBVs to the bulls previously used and it’s hoped they will achieve the new target gain from birth to slaughter of 1.02kg.

“The data on which we have selected these bulls is more accurate because of Breedplan so we now have bulls like Grubby who is extremely easy calving with a low calf birthweight, but has a far bigger growth rate, bigger eye muscle area and higher retail beef yield than Clifford,” says Mr Frost.

“But breeders must understand it’s essential to give accurate information about birthweight and calving ease. This data is paramount,” says Mr Frost, who also runs the Mawstone herd of pedigree Charolais.

Wherever possible the gestation length of the suckler cows at Hopping Farm is recorded. “We can work this out based on the pregnancy scanning results; we actually scan when the bulls have been in for 60 days and then again to pick up any cows that we are not 100% sure are pregnant”

“We record gestation length, the birthweight and the calving ease of all calves and we continue to work closely with John and Alan Daw (finishers of the calves) to provide data to record the all important daily carcass gain figure,” says Mr Frost.

But he believes that while there are now more commercial bull buyers taking account of EBV figures there are still many who are still buying bulls to produce “pretty” calves to sell on as stores.

“The fact the top third of suckler herds are still losing money according to EBLEX is a deeply worrying situation.

But it is retrievable if there is far greater acceptance of the fact that bull selection based on EBVs really works in terms of enhanced performance of the progeny and ultimately improved profitability.